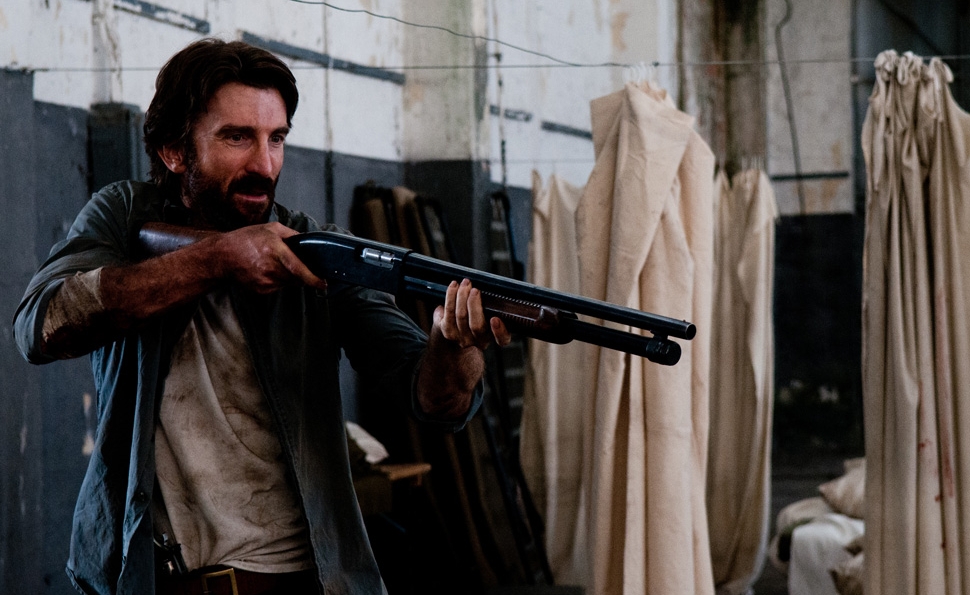 Open Grave opens in an open grave, so let’s hear it for truth in advertising. A haggard-looking man (Sharlto Copley) awakens at the bottom of a large, deep pit, surrounded by hundreds of corpses. He has no idea how he got there, and soon realizes the problem is more serious than that: He doesn’t even remember who he is. Unable to climb out of the hole, he’s rescued by a woman (Josie Ho) who tosses down a rope; she can’t tell him anything useful, however, as she doesn’t speak at all. She does lead him to a nearby cabin—they appear to be deep in the woods—where four other amnesiacs are huddled, terrified, though nobody knows precisely what they all fear. It’s a nifty what’s-going-on-here? setup with loads of potential, all of which is sadly squandered by uneven acting, hackneyed direction, and a script that can’t think of anything to do other than delay the underwhelming revelation as long as humanly possible.

The lack of a compelling protagonist is especially damaging. Since breaking out as the lead of District 9, in which he played (initially) a bumbling everyman, Copley has revealed a penchant for Nicolas Cage-style grandiloquence; last year saw him play two radically different villains in Elysium and Oldboy, projecting guttural brutality in the former and effete prissiness in the latter. Here, though, as John (everyone learns their names from their driver’s licenses), Copley is playing a perplexed blank slate, which gives him nothing to work with, and he falls back on generic desperation that often seems like it isn’t about the character’s immediate circumstances, so much as the South African actor’s realization that his attempt at an American accent sounds ludicrous. It doesn’t help that he’s surrounded by dull stereotypes: timid intellectual Nathan (Joseph Morgan), suspicious misanthrope Lukas (Thomas Kretschmann), hair-trigger macho man Michael (Max Wrottesley), and of course the plucky young love interest, Sharon (Erin Richards). None of these people are remotely interesting, even allowing for the fog of memory they all inhabit, and no compelling dynamic ever emerges among them, even after they start remembering things. (After one person dies, another says “That was my brother,” in a tone far more suited to a statement like, “I dropped my sandwich.”)

Still, the Paranormal Activity franchise has demonstrated that bland, forgettable characters aren’t an insurmountable hindrance, provided there’s enough spooky shit going down. The real problem with Open Grave is that screenwriters Eddie and Chris Borey have no game plan for getting from their mysterious premise to their big reveal, which isn’t all that shocking or unexpected anyway. When in doubt, they suggest that the unnamed, mute woman played by Ho possesses crucial information she can't convey—it’s made clear, for example, that something momentous is due to happen on the 18th of the month, which is imminent. A little of that cheap device goes a long way, though, and encounters with zombie-like people chained up in hovels or tied to barbed-wire fences amount to tepid booga-booga even as they more or less give the secret away. Meanwhile, the open grave John found himself in at the beginning of the movie plays no further role, excepting one brief, pointless interlude that could be cut from the movie without harming it in any way. (Mute lady just throws down the rope again. Reset!) Director Gonzalo López-Gallego’s previous film was the widely reviled Apollo 18, about alien rocks on the moon; it was stupid, but at least it was memorably stupid, which is more than can be said of his latest.