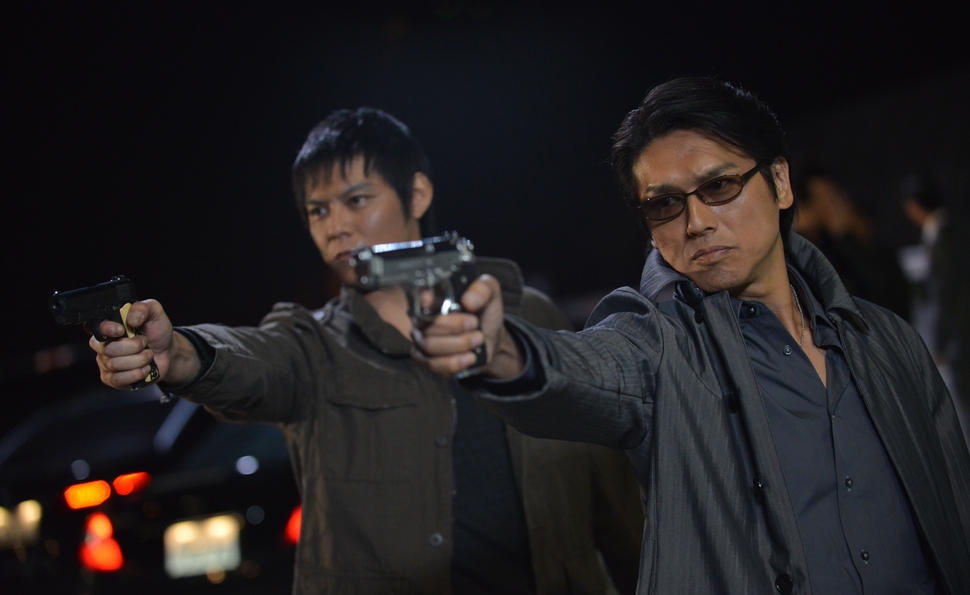 Until recently, filmmaker Takeshi Kitano was nearly impossible to pin down. His early efforts—Boiling Point, Sonatine, Fireworks (Hana-Bi)—were a disarming amalgam of extreme violence and sincere tenderness, with a faintly philosophical undercurrent, that appealed to genre hounds and tony cinephiles alike. Then, about a decade ago, Kitano got restless and began making self-referential absurdist exercises (Takeshis’, Glory To The Filmmaker!, Achilles And The Tortoise), one of which went so far as to replace his own character with a deliberately fake-looking dummy whenever he was threatened with harm or even faintly insulted. These movies were so aggressively bizarre that they were never released in the U.S., and critical opinion was sharply divided, to put it mildly. Nonetheless, they were ambitious and wildly individual, the work of an artist struggling to find a new mode of expression. Consequently, Outrage, Kitano’s 2010 return to yakuza mayhem, felt like a retreat: all creative violence all the time, with little of the offsetting beauty that made the carnage distinctive. And now he’s made his first outright sequel, Beyond Outrage, which is also, not coincidentally, the first Takeshi Kitano movie that could be called lazy.

Part of the problem with the Outrage films, at least for Western viewers, is that they assume a deep fascination with the power structure of rival Japanese mob outfits. Beyond Outrage, in particular, spends an enormous amount of time detailing what are essentially stockholders’ meetings, in which various factions deliberate who can or can’t be forced out—or rubbed out. Nor is there much continuity between the two films, since very few characters survived the first one. Otomo (Kitano), the original film’s prime mover, is now serving a prison term, but he’s quickly sprung by Detective Kataoka (Fumiyo Kohinata), who’s posing as a dirty cop and wants to use Otomo’s return as a means of dividing and conquering. Sure enough, the new leader of Otomo’s outfit, Kato (Tomokazu Miura), immediately orders Otomo’s execution, kicking off an internal war that expands to include members of Japan’s other yakuza powerhouse. Parallels between crime and business are so pointed that the movie’s climax is more or less a corporate merger, albeit one that brings gory new meaning to the phrase “hostile takeover.”

In Outrage, Kitano peppered violent outbursts throughout the movie, ensuring an adrenaline rush every few minutes; the film was sometimes monotonously repetitive, but it kept springing to hideous life. Beyond Outrage, by contrast, sequesters most of the bloodshed in the third act, which makes its first hour and change little more than an endless procession of nattily dressed men yelling at each other about arcane rules of conduct. Detective Kataoka’s scheme to defeat both gangs by playing them against each other, using Otomo as his linchpin, recalls Yojimbo (and its spaghetti-Western remake, A Fistful Of Dollars), but he’s mostly orchestrating events from the comfort of his office rather than getting his own hands dirty, so both tension and identification are minimal. Furthermore, the violence, when it finally arrives, is baroque enough to suggest that Kitano views this series as his own version of the Saw franchise, with its obligation to continually up the ante. There’s a power drill to the face; there’s a dude who bites off his own finger when a knife isn’t handy; there’s a long, slow murder committed via a baseball pitching machine. Lumped together at the end, these acts become numbing, and the movie as a whole feels cynical and exhausted. Kitano’s surreal autobiographical phase was maddening, but it’s depressing to see him stoop to giving audiences what he thinks they really want.