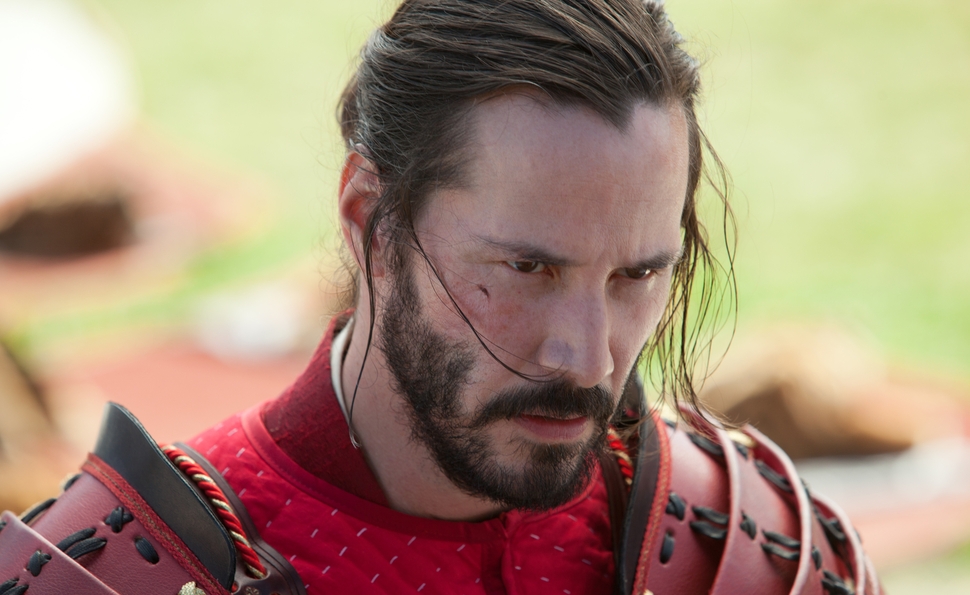 Keanu Reeves has appeared in several period films in the quarter-century since he lent an unmistakably California-chill vibe to Stephen Frears’ 1988 take on Dangerous Liasons. Yet he remains one of America’s most inveterately contemporary movie stars. It doesn’t matter whether Reeves is playing an 18th-century French music teacher in Dangerous Liaisons or a 19th-century British solicitor in Bram Stoker’s Dracula; his accent and personality always seems traceable to either Hawaii or southern Los Angeles, late in the 20th century or early in the 21st. No matter who he’s playing, Reeves always seems to be playing a totally awesome surfer-bro.

That also holds true in 47 Ronin, a troubled, big-budget action-adventure that makes the mistake of stranding Reeves in a long-ago century, then exacerbates its miscalculation by miscasting him as a mysterious, powerful warrior of mixed ancestry and a complicated birthright. Reeves doesn’t have the swagger or the gravity to pull off the role. His character is supposed to be an unstoppable fighting machine, but he looks like he’s scanning the gaudy, overstuffed sets, searching for gnarly waves to ride.

Based on a Japanese legend involving 47 leaderless samurai who banded together to take vengeance on the man whose actions led to their leader’s death, the film casts Reeves, who recently explored this territory in his directorial debut, Man Of Tai Chi, as Kai, a half-Japanese, half-British cipher in love with Mika (Kô Shibasaki), the daughter of his territory’s master.

Kai fights honorably and fearlessly, but is repaid with cruelty, abuse and vicious public beatings. In a brutally caste-conscious society, he’s cursed by his lowly origins, but when his master commits seppuku following a humiliation engineered by the villainous Lord Kira (Tadanobu Asano), Kai joins forces with a band of directionless warriors led by Kuranosuke Oishi (Hiroyuki Sanada) in a quest for vengeance against Kira and his minions. The Oscar-nominated Rinko Kikuchi of Babel and Pacific Rim co-stars as a shape-shifting witch who sometimes assumes the form of a fox and conspires against the righteous ronin alongside Lord Kira. Like the 300 well-oiled, scantily clad musclemen in 300, the 47 ronin are outnumbered and outmatched, but blessed with a divine sense of purpose and a peerless fighting spirit.

47 Ronin bears jagged stitches that betray its tortured production and post-production. The film is burdened by a dour, fun-killing reverence for the legend it is chronicling, as well as a solemn tone that ensures that any laughter will be unintentional. It’s as if the filmmakers told the cast and crew that it would be disrespectful to make a movie too lively, so for the sake of propriety, the legend must be addressed as humorlessly as possible. 47 Ronin is elephantine and lumbering, a wobbly, would-be epic that aspires to the scope and majesty of The Lord Of The Rings trilogy, but comes up woefully short.

The film cost a fortune to make, with a budget exceeding $170 million and a shooting schedule that was repeatedly extended for extensive reshoots, yet the effects are shockingly, suspiciously cheap and unconvincing, even primitive. 47 Ronin has a Lord Of The Rings special-effects budget and the homemade quality of an Asylum-produced Lord Of The Rings knock-off, if not the cheeseball low-budget charm.

But the film’s central problem is Reeves. Even after the Matrix trilogy and Man Of Tai Chi, Reeves still seems weirdly out of place in this genre, despite his impressive fighting skills and clear reverence for the form. He’s at least 10 years too old and a thousand times too 21st-century American to be convincing. Reeves’ performance as the glowering heavy in Man Of Tai Chi was at least good for a guilty laugh, but he’s simply no fun here. Part Lord Of The Rings knock-off, part non-starting fantastical take on a beloved Japanese legend, and part misguided Keanu Reeves martial-arts vehicle, 47 Ronin serves many masters and none of them well, particularly those sleepy, luckless souls in the audience. Who will avenge their injustice at the filmmakers’ hands?