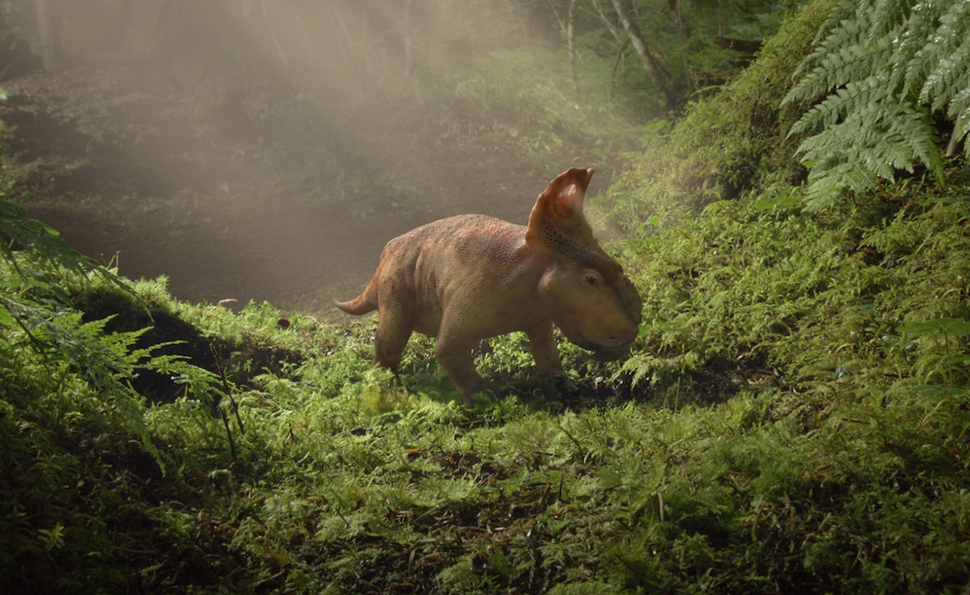 According to an Animation Magazine feature, Walking With Dinosaurs, the feature-film adaptation of the BBC smash miniseries, was originally conceived as a more-or-less silent film whose only organic sound would be the noises of its dinosaur characters. Then, according to character designer David Krentz, “The powers that be decided to add narration and voiceover to reach a wider audience, and the characters became slightly anthropomorphized to make them more attractive to younger kids.”

Krentz tries to put the best possible spin on the changes, but his use of the phrase “powers that be” betrays a profound ambivalence, as the “powers that be” are almost invariably sinister, particularly where entertainment is concerned. Krentz  diplomatically, adorably insists that the degree of anthropomorphization involved was slight, when in fact it’s extreme. Unless, that is, Krentz’s research determined that the first romantic yearnings of young dinosaurs was indeed accompanied by the strains of a Barry White song on the soundtrack, and that dinosaurs followed the same bland path in life as the human protagonists of countless generic coming-of-age movies, arbitrary love interest included.

Krentz and his collaborators might have set out to create an exercise in pure storytelling that would educate children about dinosaurs, while at the same time entertaining them with an epic, larger-than-life quest of heroism and bravery. But somewhere along the way, those honorable intentions got hopelessly mixed up, and the film became nothing but clattering distractions, celebrity voiceovers, and poop jokes.

The problems begin with a contemporary framing sequence involving a mopey teen (Charlie Rowe) in a hoodie whining about how dinosaurs are dumb and gross and he’d rather be listening to loud rock ’n’ roll music, chewing bubblegum, or thinking about girls, instead of going on some lame archeological dig with his Uncle Zack (Karl Urban). Then a bird voiced by John Leguizamo shows up and tells the gloomy punk a story designed to illustrate the glory of the prehistoric era and reignite the young man’s long-lost love for dinosaurs. This framing device establishes a generic tone of chipper enthusiasm from which it seldom deviates, but it also ends up minimizing the grandeur of the prehistoric age by reducing it to a story told to cheer up a sullen white kid.

The film then flashes back to the age of the dinosaur, where Leguizamo’s distinctive, migraine-inducing squawk now emerges from the beak of a prehistoric bird who narrates the proceedings and serves as the wacky, wisecracking sidekick of protagonist Patchi (Justin Long). Patchi is born the runt of his herd, a pipsqueak seemingly doomed to live forever in the shadow of his fierce older brother and his legendary father, but through hard work and belief in himself, he proves himself as a leader.

Walking With Dinosaurs travels a straight coming-of-age arc that takes its protagonist on a hero’s journey from raw ambition and self-doubt to maturity and achievement, but its clichéd plot isn’t anywhere near as problematic as its reliance on loud, clattering comic commentary. Leguizamo doesn’t just provide the film’s main voiceover performance: His loud, manic, abrasive voice and personality dominate the film. It becomes The John Leguizamo Show, with the motormouthed actor doing nonstop shtick and spouting off random non sequiturs and glib pop-culture references at a machine-gun clip. At one point, Leguizamo even stops the film cold for a solid minute to giggle uproariously at the incongruously tiny arms of an otherwise-fierce dinosaur.

Walking With Dinosaurs wants to educate and wow small children, but that sense of awe is undermined when Patchi gazes with big-eyed wonder at a stunning patch of land as Leguizamo’s sassy bird glibly points out that it’ll all just be an oil field one day. And the film simply doesn’t have the emotional depth to support a sequence where Patchi looks on in horror as his father is killed in front of him. Bambi this is not, and the sequence is so much darker than the rest of the film that its inclusion feels bracingly out of place, even a little traumatizing.

The film aspires to educate as well as entertain, rattling off the names and relevant distinctions of various dinosaurs as they appear onscreen for the first time. But the overwhelming impression the film leaves is that dinosaur poop was enormous. That’s probably true, but it’s not much to build an entire film around, even when wedded to the improvisational, mildly risqué comedy stylings of John Leguizamo.