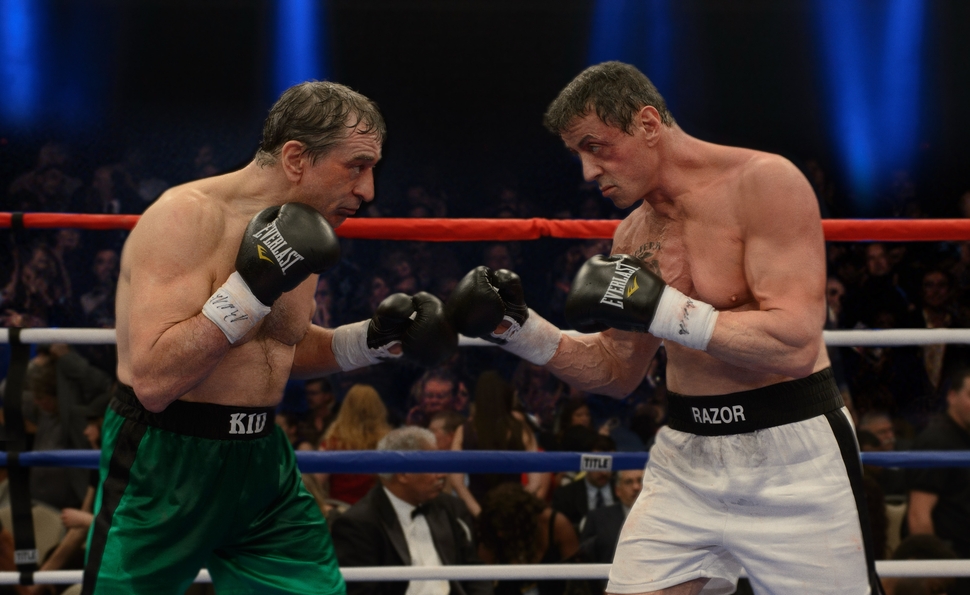 By the end of Raging Bull, former boxing champion Jake La Motta is reduced to entertaining nightclub audiences with dumb one-liners; his great career has been reduced to a sad joke. That’s essentially where viewers meet Billy “The Kid” McDonnen at the start of Grudge Match, playing second banana to a wisecracking puppet in a seedy Pittsburgh bar. Raging Bull was a tragedy, with star Robert De Niro at the absolute peak of his powers. Grudge Match is a comedy, but the fact that De Niro himself has seen his great career reduced to these sad jokes undercuts the humor. So it goes for the rest of the movie, which is the rare cinematic experience that is both wall-to-wall jokes and wall-to-wall depressing.

De Niro’s Billy and Henry “Razor” Sharp (Sylvester Stallone) were ferocious rivals back in their primes. They split two title matches, but the scheduled tiebreaker never happened, after Henry suddenly retired without warning or explanation. Thirty years later, Billy owns a bar and a car dealership; Henry works in a factory. When their shady promoter’s son (Kevin Hart) enters their lives with an offer of a big payday for a few hours of motion-capture work, they’re in no position to refuse. A cell-phone video of a scuffle between Billy and Henry at the recording session becomes a viral sensation on YouTube, which drums up enough interest for a real match, one that will finally settle once and for all who is the best of the best.

The whole conceit is designed to play with the iconography of De Niro and Stallone as the two most famous boxers in movie history: La Motta and Rocky Balboa, respectively. The idea of these geezers getting back in shape for one more fight lets them each poke fun at their old roles. Billy packs on the pounds and redoes his nightclub act. (Sadly, he never accuses anyone of fucking his wife before beating them mercilessly.) Meanwhile, Henry chugs raw eggs and heads to a slaughterhouse to pound some meat. (His trainer, played by Alan Arkin, begs him to stop punching everything.)

The in-jokes are kind of cute, but focusing on De Niro and Stallone’s movie-star images only takes Grudge Match so far. It’s not like these guys spent their careers vying for the same parts and awards (they did compete against each other for the 1976 Best Actor Oscar; they both lost to Peter Finch), and nobody actually cares who would win in a fight between the Italian Stallion and the Raging Bull. Plus, Stallone, who is still in action-movie shape, looks like he could break De Niro in half just by leaning on him. This whole conceit would make more sense if it starred actors who were legitimate rivals and equals; if it was De Niro and Al Pacino, or Stallone and Arnold Schwarzenegger. The screenplay by Tim Kelleher and Rodney Rothman tries to level the playing field by giving Henry a physical disability to overcome, but even with it, there still isn’t much tension in their big battle. 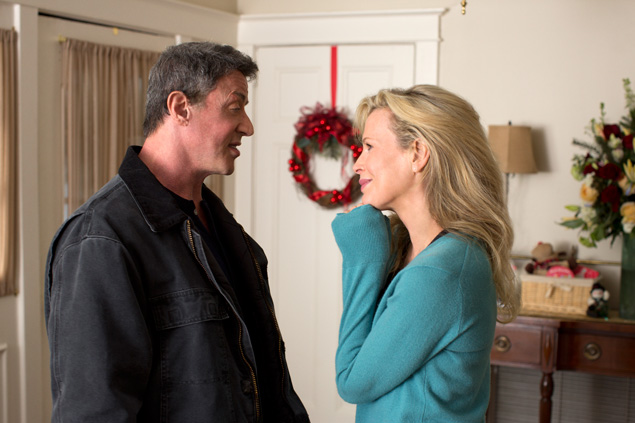 To offset the lack of drama at the center of the plot, director Peter Segal (Tommy Boy) lays on the subplots and the supporting characters at the margins. Kim Basinger plays a woman from Henry’s past who returns to rekindle their relationship; Jon Bernthal is B.J., the adult son Billy has never met. Both of these storylines are fairly serious, and both show these boxers as men who have lived lives full of regrets and missed opportunities, and are now getting one last chance—inside and outside the ring—to get things right. There’s an interesting movie to be made about great athletes (or great actors) grappling with their mortality and refusing to go quietly into the night. Unfortunately, Stallone already made it; it was called Rocky Balboa.

That movie took a silly idea—sixtysomething Rocky comes out of retirement for one last match with the current heavyweight champ—and played it seriously. Stallone might have been way too old to actually fight for the title, but his struggle to prove he wasn’t entirely over the hill (both on- and off-camera) gave Balboa legitimate weight. Grudge Match takes a silly idea—two sixtysomething boxers lace up the gloves for one last fight with each other—and treats it as a silly idea. It keeps cutting away from its potentially meaty themes and defaulting to lame slapstick and bathroom humor, adding Arkin to rehash his cranky-old-man schtick, and Hart to drop rapid-fire ad-libs. The obligatory training montage includes gags about Henry soaking his hands in horse urine (yuck!) and Billy farting in B.J.’s face. (Yuck! Also: metaphor?)

There are a few highlights—B.J. confronting his father for the first time, Henry giving an emotional speech about mistakes—but the core of the movie feels hollow. At this point in their lives, its laudable that both men want to prove they still have what it takes to compete and succeed, but that message would mean a lot more if Grudge Match seemed like anything more than an excuse for high-concept stunt casting. The scene that rings truest is the one where Hart’s character shows up to coax Billy and Henry out of retirement with the promise of boatloads of cash.