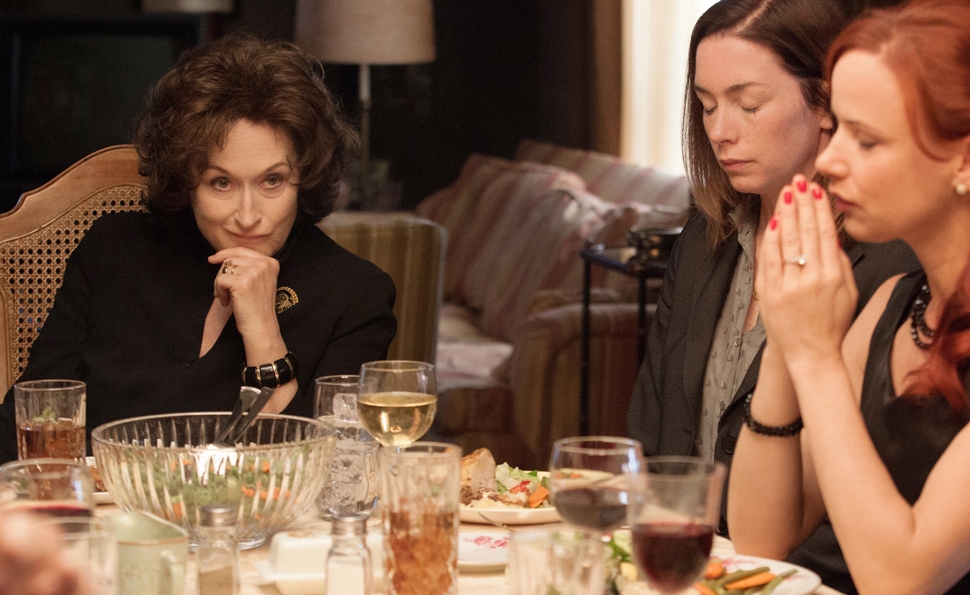 There’s no more stage-friendly setting than the huge, rambling house where a diverse cast of characters are confined together for a short, tense period. The single-set scenario is cheap and easy to pull off in a theater with limited resources, and any story that forces disparate people to spend time in close quarters, linked only by a common cause (a holiday, reunion, shared vacation, ghost-hunting project, whatever) is a comfortable recipe for a variety of dramatic confrontations. But similarly set-bound films are more difficult: Unless claustrophobia is expressly part of the narrative design, they tend to feel stagey and limited, which in turn makes them feel artificial. Add in overstuffed melodrama and a familiar three-act structure, and they can stop feeling like films altogether.

That’s one of the many problems with August: Osage County, the third stage-to-film adaptation written by Tracy Letts. (The stage version won the Pulitzer in 2008.) The story strands the members of an extended family in a sprawling Oklahoma home where they gather to wait out a family crisis. But all the waiting gives them plenty of time to express decades-old grievances via periodic screaming matches or terse, subtext-laden attempts at polite conversation. It’s a programmatic process, leading from point A to point B to point C, and it feels immensely contrived. The action occasionally leaves the house, but the actors still feel like they’re playing more to the unseen proscenium than to each other.

Meryl Streep leads the cast as Violet Weston, an abusive, addiction-prone matriarch whose three adult daughters, Barbara, Ivy, and Karen (played by Julia Roberts, Julianne Nicholson, and Juliette Lewis) all approach life and family with varying degrees of brittleness and false cheer after a lifetime of mistreatment from her. When Violet’s battle-weary husband Beverly (Sam Shepard) disappears, the family descends on the Weston’s home to wait for news about him, but they bring a considerable pile of emotional baggage along. Barbara arrives with her husband Bill (Ewan McGregor) and 14-year-old daughter Jean (Abigail Breslin), though Barbara and Bill are separated and considering a divorce due to his affair with a younger student. Karen brings her latest boyfriend, Steve (Dermot Mulroney), a bluff, smug schmuck who immediately starts cozying up to Jean. Meanwhile, Ivy pursues a secret courtship with her slow-witted, clumsy, but sweet cousin Little Charles (Benedict Cumberbatch, cast against type and awkwardly overacting to compensate for his stilted character). Also in residence: Little Charles’ parents, Charlie (Chris Cooper) and Mattie (Margo Martindale).

There’s plenty of spite and malice to go around with this crew: Mattie treats most people with no-nonsense friendliness, but heaps scorn on her husband and bile on her son. Bill and Barbara snipe and swipe at each other, while everyone looks down on Karen, who compensates with a game face and chipper attitude that seem like a lacquer-thin mask over her desperation and neediness. And Violet acts as a sort of hateful, addled bandleader, savaging each relative in turn. Her unconscionable cruelty (interspersed with pill-popping and wide-eyed insistence that she’s just a blameless truth-teller) comes to a head at an interminable group dinner, where among other things, she leads the entire family in mocking Jean for being a vegetarian. Then she tells her daughters that Beverly never got around to amending his will to disenfranchise them, but secretly planned for her to get everything, so she expects them to forgo their inheritance. But, she adds brightly, she’d be happy to sell them any household furniture she doesn’t want.

This kind of broad, comedically oversized venom and selflishness is typical for a film that goes over the top easily and often. By taking all the bombastic scenery-chewing as seriously and self-importantly as possible, director John Wells seems to be trying to make August: Osage County as brutally confrontational as Letts’ other two stage-to-screen plays, both filmed by William Friedkin. But while the script continues Letts’ devotion to profound unpleasantness, it lacks the shock value of Bug’s bloody violence or Killer Joe’s graphic sexual assault. It also lacks the intimacy and intensity that give the other two films a breathless conviction. The cast is too big, the setting too obviously stagey, the issues too diffuse, the personalities too simple. It’s a cast of tremendous, able stars who still can’t realize their characters in much depth, because they each get so little screen time. They aren’t well-realized people, they’re conflict engines, suitable mostly for churning out shouting, tears, and ill-timed revelations on cue. 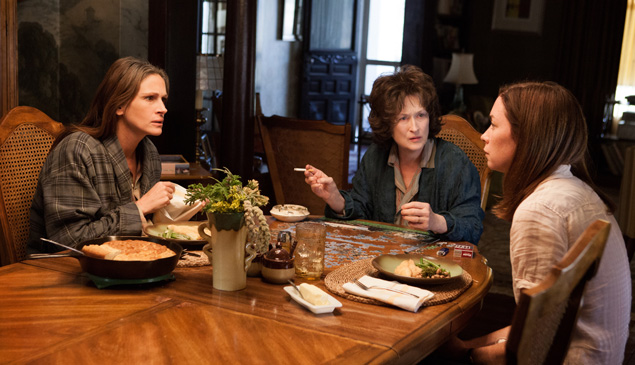 Of all the cast, Streep gets the most space for her harridan of a mother, who comes across exactly as if Martha and George from Who’s Afraid Of Virginia Woolf? had produced an extended family for her to savage with her queen-of-the-harpies act. (Letts knows it, too; his adapted script contains multiple references to that classic, from his own version of “Here We Go ’Round The Mulberry Bush” to a sneering reference to Elizabeth Taylor.) But even Violet is more obstacle than human. Given a single monologue to explain herself, she lays out a motivation so simple, it feels like a weak cliché: Her mother was awful to her, so she’s awful to her daughters, who are becoming awful in turn. Like the final big reveal that wraps up the film, it’s all so cut-and-dried and obvious, it feels as familiar as the house-of-family-horrors setting.

August: Osage County does offer strong performances: Martindale and Cooper are always reliable presences whether they’re acting out well-worn, low-key marital animosity, or winding up to a fever pitch of rage. Roberts is startlingly effective in her grim, hard-driving role as the family member most determined to cow Violet through sheer force of will. At its best, the story does subtly communicate the sensation that all these characters are the stars of their own bigger worlds, and that their identities get lost around their family, as they’re pulled out of their element and into this forced, painful roundelay. But it’s all more grotesque than immersive. The curtain can’t come down on this farce quickly enough.