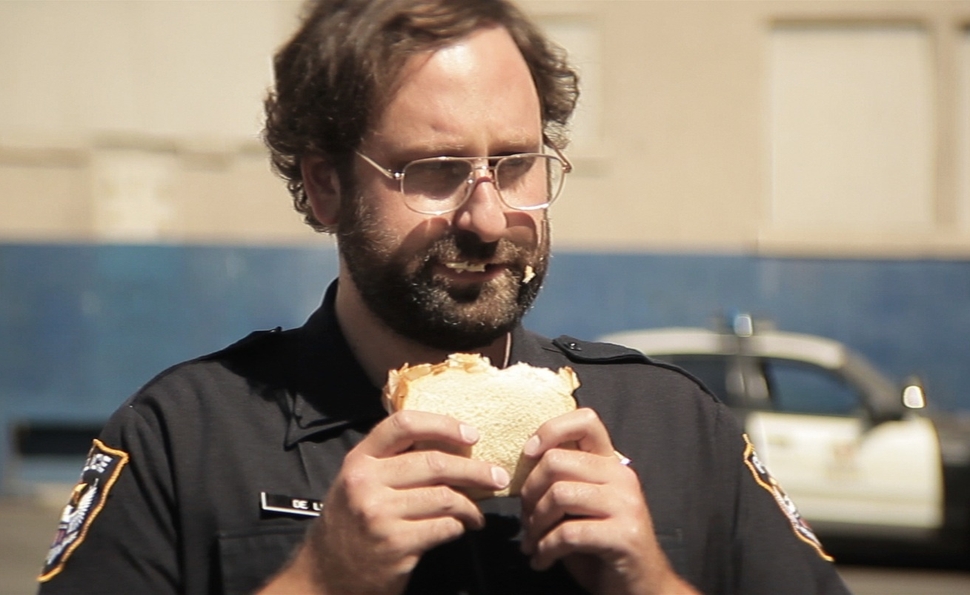 Quentin Dupieux’s first feature, 2010’s Rubber, which is about a killer sentient automobile tire, begins with a direct-to-camera monologue insisting that many things happen for no reason whatsoever. Two films later, it’s clear that Dupieux is profoundly committed to the concept of random absurdity, for better and worse. At the beginning of Wrong Cops, for example, a police officer (Mark Burnham) accepts a wad of cash from a teenager and hands him a huge dead rat in return, patiently explaining that the weed the teenager just bought is hidden inside. (“It’s easier to carry, more discreet.”) An opening-credits sequence then depicts the cop driving all over town passing out huge dead rats to everyone he encounters, including a young woman (French star Roxane Mesquida, in a 10-second cameo) who gets handed one in return for a blowjob. Why a dead rat? No reason, it’s just funny. It gets funnier still when the cop loses his rat supplier, and has to settle for duct-taping his drugs inside dead fish, like some bozo.

The one problem with random absurdity, though, is that it’s so random. Dupieux’s movies tend to peter out, even though they’re all short (Wrong Cops is just 82 minutes); his style is better suited to sketch comedy than to feature films, which demand some sort of discernible structure. Even the Naked Gun movies—or to go way back, the Marx brothers—made an effort to find a delivery system for their gags that at least superficially resembles a conventional story. The sole unifying element of Wrong Cops is “cops who are wrong.” The bit about a desk jockey (Steve Little) desperately trying to cover up his past as a gay-porn actor has nothing to do with the bit about the horny cop (Eric Wareheim) who uses his badge to try to coerce young women into showing him their breasts, which has nothing to do with the bit about the sullen teenager (Marilyn Manson!) whose charge of police brutality involves a rogue cop who forced him to listen to the worst electronic music he’s ever heard. Some of these routines are hilarious, others forced, but they’re all routines, not parts of a cohesive work.

This scattershot quality results in a film that has no particular reason to end when it does, apart from the fact that it’s just squeaked past what might be considered feature length. Dupieux might have done better to construct an entire movie around his best idea, which sees a mortally wounded gunshot victim (Daniel Quinn) getting carted around in various car trunks (ostensibly to be disposed of) and drafted into multiple cops’ goofy adventures, like a cruelly conscious version of the stiff in Weekend At Bernie’s. Better yet, Dupieux might have ditched the ensemble and handed the film to Burnham, a little-known actor who makes his Officer Duke into something of an unholy combination of Ron Swanson and Dwight Schrute, with the former’s macho bluster and the latter’s pugnacious cluelessness. Alone among the cast, Burnham has the timing and force of personality to anchor a movie the way Leslie Nielsen once did; had he been the primary focus, Wrong Cops might have played less like three super-wacky episodes of Reno 911! strung together. Don’t expect Dupieux to take these suggestions to heart, though. There’s no reasoning with some people.