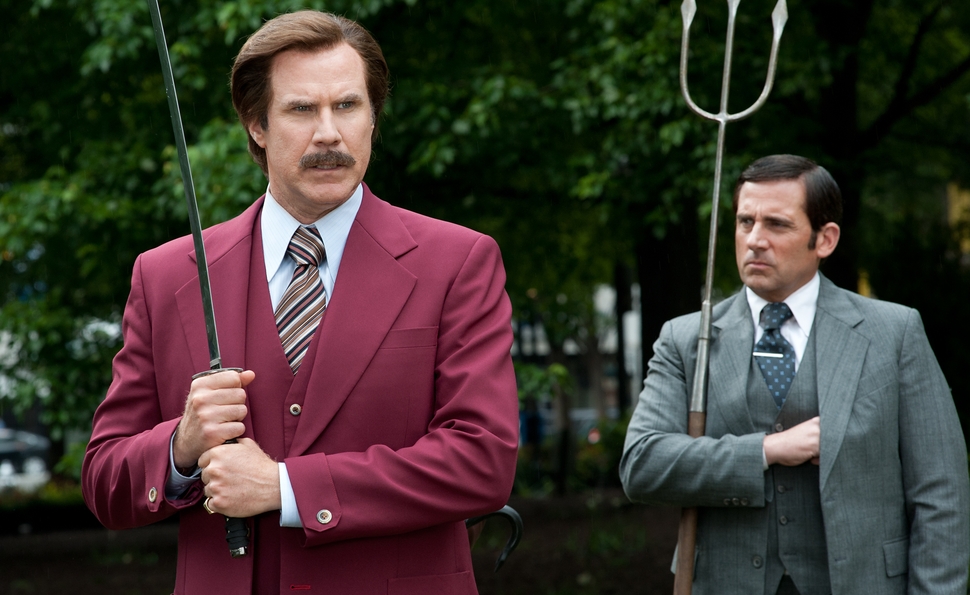 Adam McKay’s movies tend to play better on the 10th viewing than the first. His humor is so surreal and unpredictable, it sometimes takes a couple of tries to fully appreciate its quirks and eccentricities. No wonder his aesthetic lends itself so well to a sequel; faithful fans of the first Anchorman already understand the rules of The Legend Continues’ universe, and they’re all the more prepared to indulge McKay and star/co-writer Will Ferrell in their inspired flights of comedic fancy. A lot of sequels suffer from a debilitating sense of sameness, but in McKay’s world, familiarity breeds quotation rather than contempt. When Anchorman 2 repeats gags or motifs from the original movie, it doesn’t feel like a rehash so much as a reunion with old friends.

It helps that McKay and Ferrell spend as much time upending viewers’ expectations as fulfilling their desire to see San Diego’s favorite newsman, Ron Burgundy (Ferrell), and the rest of the Channel 4 News Team back in action. Ron’s riches-to-rags-to-riches character arc remains the same, but McKay and Ferrell throw in plenty of curveballs along the way. They e-brake their entire narrative for a long, delightfully strange digression set at a lighthouse. They brazenly make Ron Anchorman 2’s hero and villain—at various points in the film, he abandons his family, betrays his friends, aligns himself with SeaWorld, and single-handedly brings about the end of intelligent discourse on television. And they repeatedly test viewers’ tolerance for the News Team’s misbehavior. In the years between Anchorman movies, sexist sportscaster Champ Kind (David Koechner) has grown shockingly misogynistic, and weatherman/moron Brick Tamland (Steve Carell) has devolved to the point where his oddball comments are mostly incoherent grunts and screams.

Burgundy and company begin the 1980s by joining the staff of the Global News Network, the world’s first 24-hour cable-news channel. The new gig comes with new challenges, including an incredibly handsome rival anchor (James Marsden) and a renewed rivalry with Ron’s anchorwoman wife, Veronica Corningstone (Christina Applegate). Where the first movie poked fun at ’70s chauvinist outrage over the rise of women in the workplace, Anchorman 2 tackles the subject of race via the News Team’s new African-American boss, a go-getter named Linda Jackson (Meagan Good).

Most of Anchorman 2’s racial humor is more uncomfortable than uncomfortably funny, like the awkward scene where Ron tries to ingratiate himself to Linda’s family by speaking solely in the worst stereotypes of black slang. McKay and Ferrell find much greater success when they use Ron’s job at the new 24/7 news network GNN to skewer the ongoing devolution of TV journalism from fact-based reporting to opinion-based sensationalism. The dumber Ron’s reports get, the more the audience loves him. “It’s total crap, but they can’t stop watching it!” a character pointedly exclaims during one of Ron’s more egregious ratings-chasing stunts. 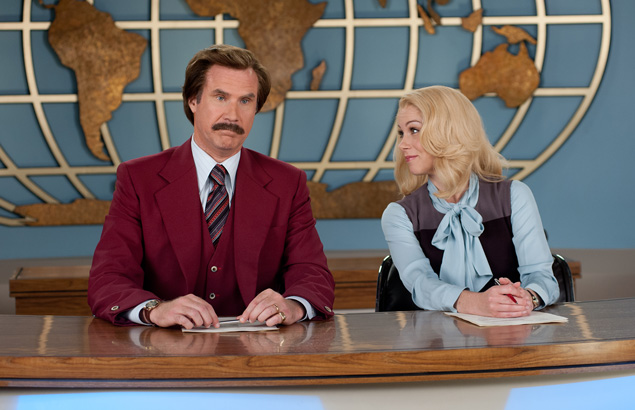 The Legend Continues contains more pointed satire than the original film. It also contains more of just about everything else. At 119 minutes, it’s almost a full half-hour longer than the theatrical cut of the first Anchorman. As evidenced by their overbearing marketing campaign—which slapped Ferrell’s elegantly mustached face on everything from Dodge truck ads to Ben & Jerry’s ice cream to Canadian curling broadcasts—McKay and Farrell believe in a more-is-more approach to comedy; if it’s possible for a movie to be too funny, Anchorman 2 might qualify. McKay shot so much extra material for the first Anchorman, there were enough deleted scenes left over to cobble together the bonus feature Wake Up, Ron Burgundy. This time, he arguably left in too much good stuff, and the film pinballs from one setpiece to the next with almost no concern for plot, characters, pacing, or stakes. At times, laughing at all the jokes actually gets a little exhausting.

Naysayers will argue that Anchorman 2 amounts to little more than an attempt to recycle the first film for a few more bucks and yucks. But while The Legend Continues does occasionally stoop to trotting out new variations on old standards—Brian Fantana (Paul Rudd) now has a cabinet of Sex Panther-esque intimacy aids with wacky names like The Gentle Mongoose and The Rigid Ghost—it also takes far more risks than the standard cash-in Hollywood sequel. Sometimes it does both at once; Anchorman 2’s climax begins as a shameless retread of a treasured sequence from the first film, then stacks one ludicrous punchline on another until the movie becomes completely, admirably untethered from any kind of recognizable reality. Scenes like that make Anchorman 2 the purest expression of McKay and Ferrell’s Dadaist devotion to nonsense since Step Brothers, and the main reason to look forward to savoring it over and over.