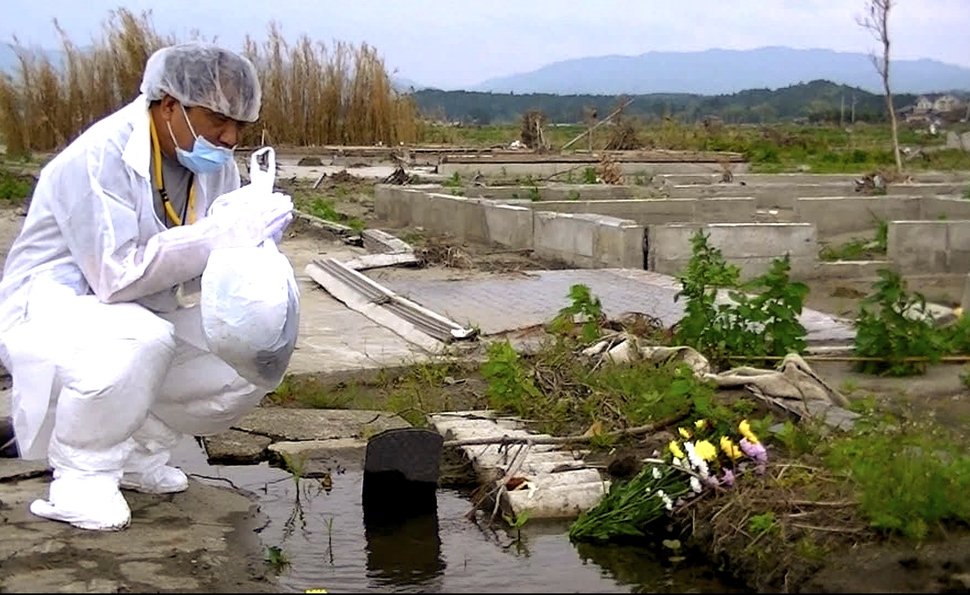 March 11, 2011 was a disaster of almost inconceivable proportions in Japan. A massive earthquake triggered tsunamis that reached more than 130 feet. Almost 16,000 people were killed, and the resulting devastation caused meltdowns at a number of nuclear reactors, releasing dangerous levels of radiation and forcing the evacuation of hundreds of thousands of people. There was an estimated $235 billion in damage, making the event the most costly natural disaster in recorded history.

Such an apocalyptic tragedy seems to call for apocalyptic representation, and there’s plenty of oh-my-God footage of surging waters on YouTube for those who want to see it. Atsushi Funahashi’s documentary Nuclear Nation goes a different route, however. Despite the dramatic title, the film is a determinedly low-key, even soporific, take on the aftermath of March 11. The documentary deals particularly with the residents of Futaba, the town that’s home to the Fukushima Daiichi power plant.

Radiation released from the reactors has made Futaba unlivable; everyone has had to leave. Refugees who couldn’t find another home were housed in a high school, living communally with their few rescued possessions. The film is mostly set in that high school, as the refugees wait and wait and wait for someone from the government or the power plants to find them new homes, or recompense them, or at least apologize.

If this does not sound like a particularly exciting premise for a film—well, yes. That’s kind of the point. The documentary is deliberately slow, and even deliberately bland. The camera lingers on people sleeping or eating. Certain refugees' lives are followed: a father and son who lost their wife and mother in the tsunami; a family whose father is back working at the dangerous Futaba reactor; the embittered Futaba mayor. But the focus and the narrative is diffuse. The stories don’t have a clear beginning, since the men and women are already homeless and adrift when they first appear onscreen. And they don’t have a clear ending; some refugees do move into new homes, but that feels less like closure or resolution than like the same slow-motion grinding on. They have to be somewhere, and so they are. But the past isn’t resolved.

“Not doing anything takes a lot out of you,” says one refugee, and that's a good tagline for the film as a whole. Their town destroyed, the former residents of Futaba are suspended in a kind of anti-narrative. Stuff happens, but slowly, and without catharsis or even impetus. The mayor goes to a meeting where various high-level officials apologize and bow and then scurry off on official business without taking questions. People go back to Futaba to gather some belongings and place flowers, all while dressed in radiation suits. The residents march, demanding to return to Futaba, though, as they admit, they can’t return, and maybe don’t even want to. A farmer explains that he’s determined to keep his cattle alive, even though he can’t sell them and they’re useless. The camera follows the irradiated animals for a while. Later, we see some cows that were abandoned by their owners; they’ve starved to death in their pens, and are now mummified corpses.

The mummified cows are certainly an arresting image, but for the most part, the film eschews the gothic for the mundane, day-to-day weariness of displacement and uncertainty. Even the agitprop anti-nuclear message gets little traction; this isn’t Michael Moore, with his staged confrontations and clear villains. A couple of residents curse at the television screen as officials blandly lie; the mayor talks sadly about the choice to bring in the nuclear plants and how they've been betrayed. The failure of compensation is numbly infuriating, but compensation isn’t going to give people back their homes anyway. The damage is done.

The result is not exactly riveting cinema. Nor is Nuclear Nation quite willing to embrace its anti-narrative elements; it often seems caught between trying to tell a story (about the evils of nuclear energy, or about particular families) and its recognition that the story it has to tell is no story. Still, despite its limitations, Nuclear Nation remains a quiet, painful reminder that disasters aren’t disasters because of the sound and excitement, but because of the blank spaces they leave in people’s lives.