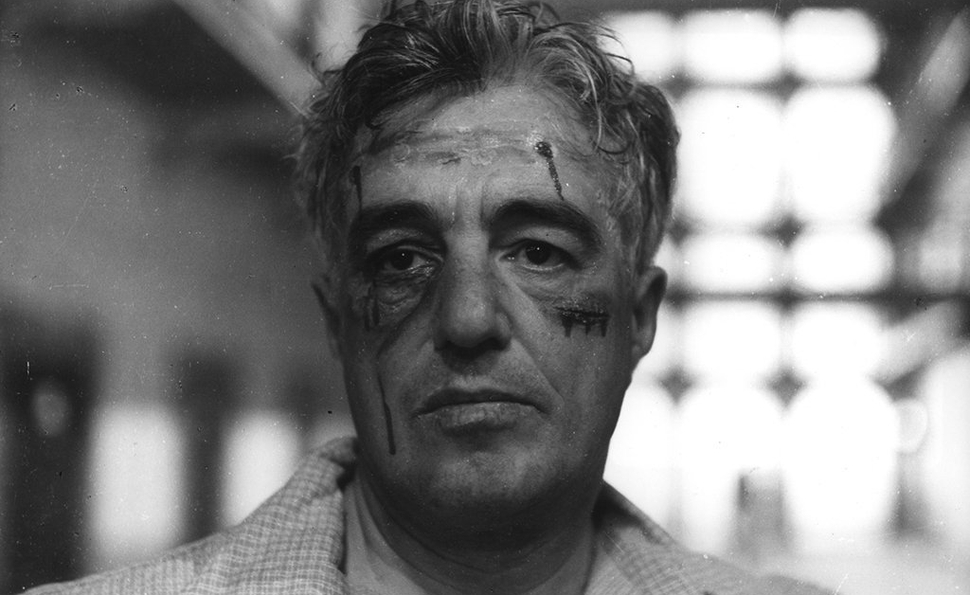 The danger of early success is being permanently pigeonholed. Roberto Rossellini’s first several features—Rome, Open City; Paisan; Germany Year Zero—helped birth the Italian neo-realist movement, with which he’s been primarily associated ever since; his penchant for shooting on location (often in parts of the country that had been bombed into rubble during World War II) and casting mostly non-professional actors became his stylistic signature. By the end of his career, however, Rossellini had done a dramatic about-face, with his last few films being didactic educational works shot primarily on sets. 1959’s General Della Rovere—which stars a fellow icon of neo-realism, Vittorio De Sica—serves as a fascinating transition between the two modes, as Rosselini enlivens a fundamentally stagebound, potentially schematic tale of personal redemption with attention to detail so painstaking, it threatens to bury the narrative.

Though De Sica, too, is now primarily remembered for just one aspect of his career (directing The Bicycle Thief, Shoeshine, Umberto D., etc.), he was a superb actor for decades before stepping behind the camera, and remained one until his death at age 73. Here, at 58, he radiates wily silver-fox charisma as Vittorio Emanuele Bardone, a gambler and con artist who earns his marks’ confidence by pretending to be one Colonel Grimaldi and currying favor with the occupying Nazis. When his ruse is discovered, SS Colonel Müller (Hannes Messemer) offers him a deal: Rather than being executed, Bardone can earn his freedom by impersonating General Della Rovere, an Italian Resistance leader who, unbeknownst to his comrades, was recently killed by the Germans. Müller wants to know the identity of another Resistance leader, code name Fabrizio, who has to be among nine just-captured prisoners, though nobody knows which one is him. Fabrizio is sure to reveal himself to Della Rovere in prison (he apparently isn’t known by sight to many people in the Resistance; there’s no suggestion that Bardone resembles him); once Bardone has played rat, he’ll be given a big stack of cash and allowed to flee to Switzerland.

The trajectory of this story isn’t hard to guess, as there’s no drama unless Bardone gradually comes to identify with Della Rovere and his cause. What’s remarkable about the film is how much time it invests in its protagonist before he’s even given an opportunity for personal transformation. A conventional version of this premise would spend perhaps 15 or 20 minutes establishing the hero as a self-involved jackass (see: almost any movie starring Tom Cruise), then start tossing challenges his way. General Della Rovere runs nearly two and a half hours, and 90 minutes elapse before Müller even offers Bardone the deal. Rossellini and his regular collaborator, co-screenwriter Sergio Amidei, are more interested in Bardone’s complex life as a semi-compassionate hustler, giving De Sica the space to create an indelible, richly nuanced performance. Consequently, when Bardone grows a spine and turns noble in the home stretch, the shift feels earned by the character rather than merely imposed by the script. There’s nothing remotely convenient about it.

At times, this commitment to an almost procedural degree of specificity does make the movie feel pokey. It’s questionable whether it really needed to be this long. At the same time, though, it’s hard to say what should have been cut or omitted, because even the film’s most stubborn longueurs allow De Sica a chance to add another contradictory layer to its loser of a hero. One lengthy stretch, for example, sees Bardone fail to talk a lover into lending him money or giving him jewelry he can pawn. So he takes back a fake gem he'd previously given her, wanders all over town trying and failing to find a buyer for it, finally succeeds in dazzling some wealthy women with it over dinner, then rips up the check presented to him by another woman at the table—a former lover, who knows perfectly well that the stone is fake. It’s unclear whether he does this because she can’t afford such a pointed gesture, or because he’s aware she doesn’t have the funds to cover the check anyway (as she admits). That’s emblematic of the film’s moral caginess. Even in a sentimental/triumphal mode, Rossellini kept it murky.

General Della Rovere premièred at the 1959 Venice Film Festival (where it won the Golden Lion, or first prize) with a running time of 140 minutes. Rossellini subsequently trimmed it to 132 minutes, however, and that’s the version that’s most frequently been seen ever since, including on Criterion's 2009 DVD version. Raro Video’s Blu-ray offers the original, longer Venice cut as its default, but includes the shorter cut as a bonus feature.

Also included are a number of lengthy video interviews: with critic Adriano Apra (who wrote the booklet essay as well), Renzo Rossellini (Roberto’s son), and restoration expert Aldo Strappini. (All are in Italian with English subtitles.) However, much of this material reappears in Apra’s informative yet dry 45-minute visual essay, “The Truth Of Fiction,” so all but the true obsessives will profit by just watching that and skipping the individual interviews, which are mostly redundant.