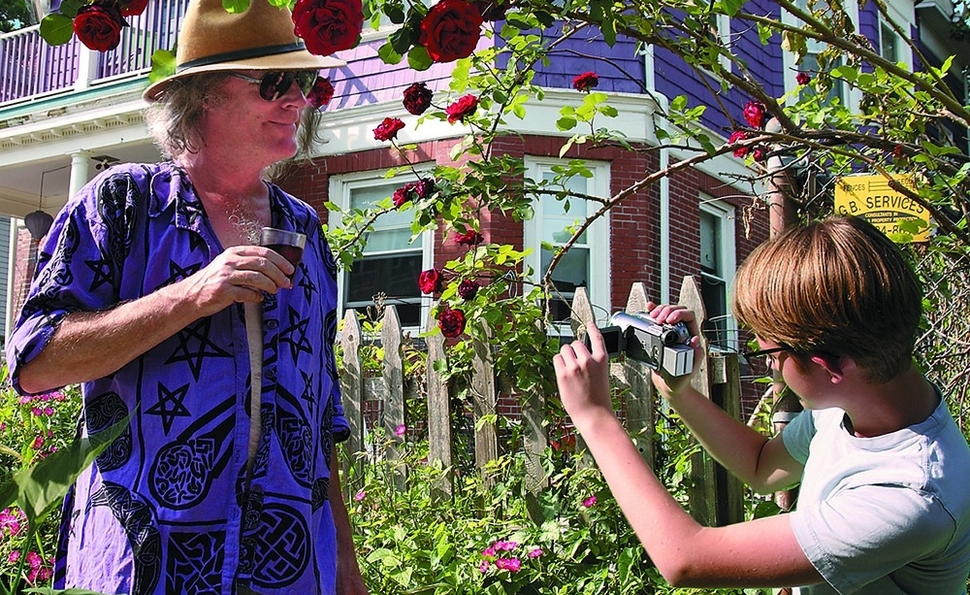 There’s some world-class lounging in Breakfast With Curtis. During the fat summer days in this Rhode Island suburb, the multi-generational artists and aging hippies who share a Victorian house they deem the “Purple Citadel” spend much of their daylight relaxing on lawn chairs and porches, playing ping-pong or pontificating, a wineglass usually within arm’s reach. The Purple Citadel is real; the film’s writer-director, Laura Colella, lives there. In Breakfast With Curtis, she co-stars with her flatmates, all playing themselves, more or less. With the exception of Colella’s boyfriend, Aaron Jungels, they’re non-actors, so it stands to reason their collective air of relaxation and bemusement is genuine. The wine is probably real, too.

Are slight, summery eccentricities among friends still fun once captured on film and preserved for the ages? The answer here, surprisingly, is yes, thanks to the way Colella lets her stars put their best faces forward: loopy patriarch Syd (Theo Green), a sixtyish Berkeley transplant with shaggy grey hair and an aversion to shirts and pants; elderly Sadie (Yvonne Parker), a philosopher of the mundane; grinning Frenchy (Jungels), a handy type who isn’t above cross-dressing. It’s just a garden party, but the hosts are amicable.

Across the street, socially inept teenager Curtis (Jonah Parker), homeschooled by his mother and still nursing childhood trauma from a terrifying encounter with Syd, joins the Citadel for a coming-of-age experience when his former adversary invites him to help make a YouTube series musing on life. (Parker and Green have uploaded several YouTube videos under the title “Breakfast With Theo,” though with only a few hundred views, their cultural currency exchange rate is low.) Syd’s teachings—ramblings, really—are practically free of meaning. But Curtis flings his camera about furiously to capture them, lens cap dangling below. Being in control of the camera gives Curtis a rare confidence, as does the freedom he exercises in the editing room: “How did he get so psychedelic?” his bemused mother (Virginia Laffey) wonders as she watches footage from a kid who was scared to leave the house just days before.

Colella, who won the FIND Your Audience prize at the 2013 Independent Spirit Awards, and counts Paul Thomas Anderson among her fanbase, is imparting genial, harmless lessons about how to be a good neighbor, with Syd as a perpetually buzzed, beatnik Mr. Rogers. Everyone gets their moment in the literal and figurative sun. Even Curtis’s parents aren’t the prudes they might seem at first glance—his mom has a thing for vodka infusions, while his businessman father sneaks off to smoke weed at the Citadel.

Breakfast With Curtis is so gentle, it doesn’t bother with antagonists, or even much conflict. Though Colella’s camera brings out the lush greenery of the Citadel’s forest-like backyard, the tones of the story remain muted, inoffensive. There’s an affecting subtext about how Curtis, in his sheltered, maladjusted existence, is just a few years away from experiencing the sort of “seminal summers” his neighbors frequently rave about from their own youths. But he’d probably prefer that summer to take place when he’s around his peers, not his elders. That’s Colella’s film in a nutshell: Not quite seminal, but getting there.