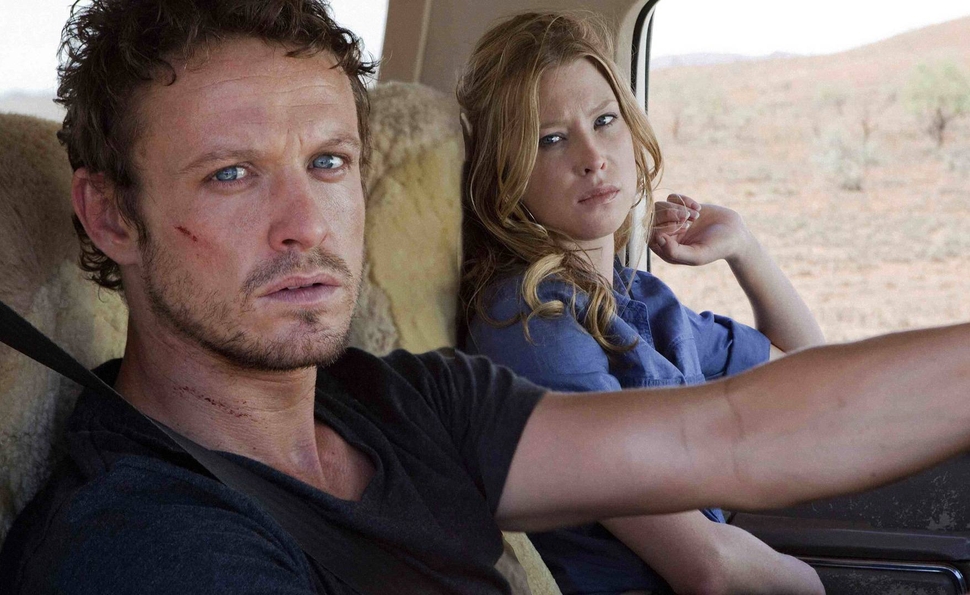 Jason Clarke’s sunken eyes, long nose, and pronounced chin serve him well when he’s scripted into acts of intimidation and violence, even when his characters have the best of intentions (as seen in last year’s Lawless and Zero Dark Thirty, or this year’s The Great Gatsby). Even his smiles seem suspect, which makes him an ideally sleazy small-town cop in the Aussie potboiler Swerve.

The film gets off to a wordless start, as a drug dealer double-crosses his hapless associate, a blonde beauty makes a Marion Crane-like getaway, and a slow-going stranger tries to take it easy on his overheated car. These three characters intersect when the speeding drug dealer flips his car from the road, and the well-meaning Colin (David Lyons) takes his briefcase of cash and a shaken Jina (Emma Booth) into the nearby town of Neverest, where he reluctantly returns both to the custody of local police sergeant Frank (Clarke). Naturally, Jina still wants to escape, Frank wants to keep his eye on her, and another stranger (Travis McMahon) would kill to find his money, stranding the waylaid Colin in the middle of a rare daytime noir.

Jina isn’t the only woman in Neverest, but according to writer-director Craig Lahiff, her lonely desperation provides the sole axis around which the men in the story rotate. More harried housewife than femme fatale (at first), Booth effectively suggests the passive-aggressive tension in her marriage and the troubles in her past that might have her eager to flee this backwater town. As an Iraq vet en route to a job interview elsewhere, Colin is a noble everyman whose efforts to do what’s proper and right often cause more harm than good; he’s savvy enough to keep his head above water, but his sympathetic nature prevents him from recognizing the larger game afoot. That leaves Clarke to greedily maintain the status quo. His Frank slips easily between authority, hospitality, and menace, proud of the life he’s made for himself and keen on keeping it just so, and though his character winds up subjected to the film’s most implausible story beats, Clarke’s wide-eyed ferocity makes it all the easier to root for Colin and Jina to escape out from under his thumb.

Driven by Paul Grabowsky’s deceptively jaunty score, Swerve is ably performed and tightly paced, initially echoing the likes of Red Rock West while never quite matching the superb standard of recent Australian neo-noirs like The Square and X. But it doesn’t stick the landing: A last-ditch effort to seed mistrust and raise tension during the train-set climax ultimately relegate this 2011 import to the realm of watchable genre exercise.