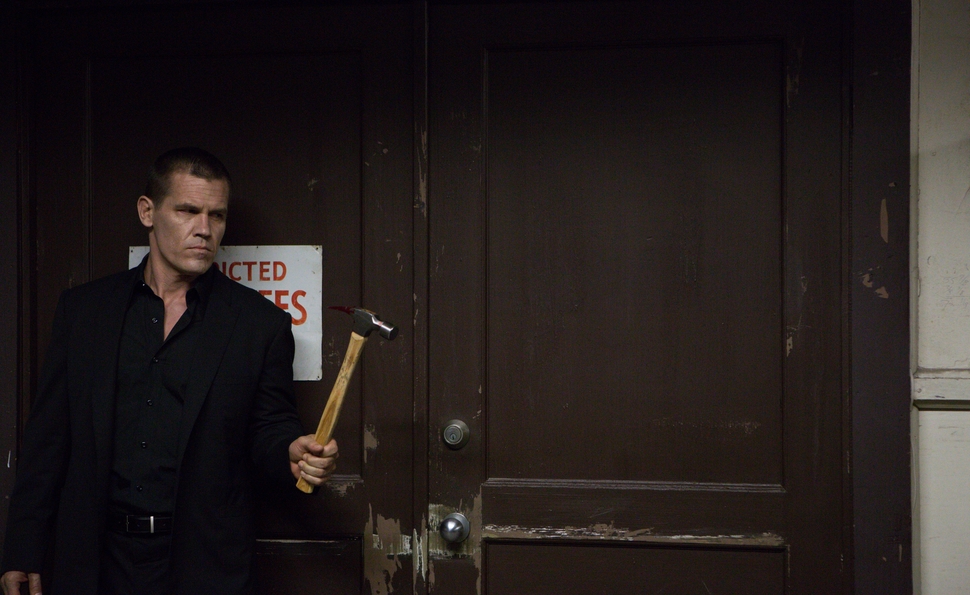 The ideal viewer for Spike Lee’s Oldboy is also an impossible viewer: someone who’s unfamiliar enough with Park Chan-wook’s original 2003 Oldboy to be shocked by the remake’s plot twists, but also familiar enough with the original to get this one’s many callbacks. Only an Oldboy neophyte would get absorbed in this rehash, but only an Oldboy expert would understand the point of the random shot of a live octopus in a Chinese restaurant. In other words, this is a very confused movie, designed for an audience that doesn’t exist.

Give it this much credit, though: The American Oldboy doesn’t neuter or tone down a bleak, unconventional story in a bid for mainstream success. Good or bad, Lee’s version is faithful to the depravity—though not the impact—of Park’s film, which was based on comics by Garon Tsuchiya and Nobuaki Minegishi). While it revises some of the details, it still hews closely to the important broad strokes. Josh Brolin stars as alcoholic ad exec and deadbeat father Joe Doucett, the sort of unrepentant screwup who gleefully tells his ex-wife he doesn’t need to come to his daughter’s birthday party because she’s only 3 and won’t remember him anyway. He has no idea how right he is.

After a typically disastrous client dinner, and a typically drunken night of carousing, Joe is kidnapped and imprisoned in a cell designed to look like a cheap hotel room. He’s given no explanation for his incarceration, and never meets his jailor. For 20 years, he’s subjected to solitary confinement, a diet of terrible dumplings, and sadistic psychological torture. When Joe makes friends with a mouse that crawls through a hole in the wall, his unseen captors kill and cook it (and its babies!) and serve them all to him on a silver platter. In Oldboy, the meek shall not inherit the Earth; they shall be devoured by the strong.

Unfortunately, Lee seems swallowed up by the material as well. Though Oldboy does thematically connect with his previous feature, Red Hook Summer, it’s hard to find much else of Lee’s signature, beyond his famous double-dolly tracking shot and appearances by frequent collaborators like Samuel L. Jackson and Michael Imperioli. Lee has married his style to great crime stories in the past (Clockers, Inside Man), but not here.

Two decades after being locked away, Joe is freed without explanation. He’s understandably intent on finding and destroying the party responsible for his lost years. He’s spent much of his captivity getting in shape and learning to fight by watching and mimicking old chop-socky movies—his 20-Year Abs have consumed more time than most commercially distributed fitness regimens, but they’re far more impressive—so he’s released reborn as a glowering killing machine. Not 10 minutes after he’s freed, he stumbles on a portable medical clinic and meets Marie (Elizabeth Olsen), a kind-hearted nurse who takes an interest in this pale-skinned, dark-suited bruiser, and quickly becomes the Dr. Watson to his deeply disturbed Sherlock Holmes.

The trail eventually leads to a man played by Sharlto Copley in one of the most misjudged and overplayed performances in recent movie history. Speaking his lines in an affected upper-class accent, exaggerating his every movement and gesture to caricatural extremes, he turns this story’s shadowy puppetmaster from sinister genius to campy weirdo. (Anthony Hopkins’ Hannibal Lecter looks subtle and nuanced by comparison.) The rest of the cast is serviceable but unexceptional. Brolin’s role makes good use of his brooding charisma, but Joe never becomes more than a one-dimensional purveyor of scowls and fight scenes. Likewise, Olsen has already proven herself capable of much more than her damsel-in-distress role here.

Joe walks out of his prison cell with a singular sense of focus; Lee’s Oldboy never achieves anything like that kind of clarity. A few individual scenes work—Brolin tortures a typically profane Jackson for information with an unforgettable play on the old expression “pouring salt on the wound”—but the sequence never really squares away what sort of movie Oldboy is supposed to be as a whole. Some scenes delight in violence, others are repulsed by it. Is this a tragedy about endless cycles of revenge? A perversely dark comedy? An action film about a guy who’s really good at hurting people? This Oldboy changes its answer over and over.

Its problems are neatly encapsulated in its version of the famous hallway fight from Park’s film, which featured the Korean equivalent of Joe (played by the fabulous Choi Min-sik) battling his way through an entire gang of goons with nothing but a hammer over the course of one impressively long take. Lee’s hallway fight is even longer and even more complicated; Joe, hammer in hand, fights across multiple levels of a parking garage; he clears a path through one batch of bad guys, then crawls down, and brawls some more.

The original hallway fight was about the epic lengths Choi’s character would go for revenge. Nothing, not even 20 angry dudes with knives and 2-by-4s, were going to keep him from seeing his quest through; Park’s technical virtuosity was only there to heighten the brutality. The new hallway fight is about topping the old hallway fight. Technically, it’s amazing, with incredible choreography by both the camera team and the onscreen performers. But it’s so excessively long, and so rigorously composed, that it becomes less about Joe’s drive to find his target, and more about Lee’s drive to outdo Park. Emotionally, it stops the story cold. Visually, it looks like something from a different movie. That movie, of course, is Park Chan-wook’s Oldboy.