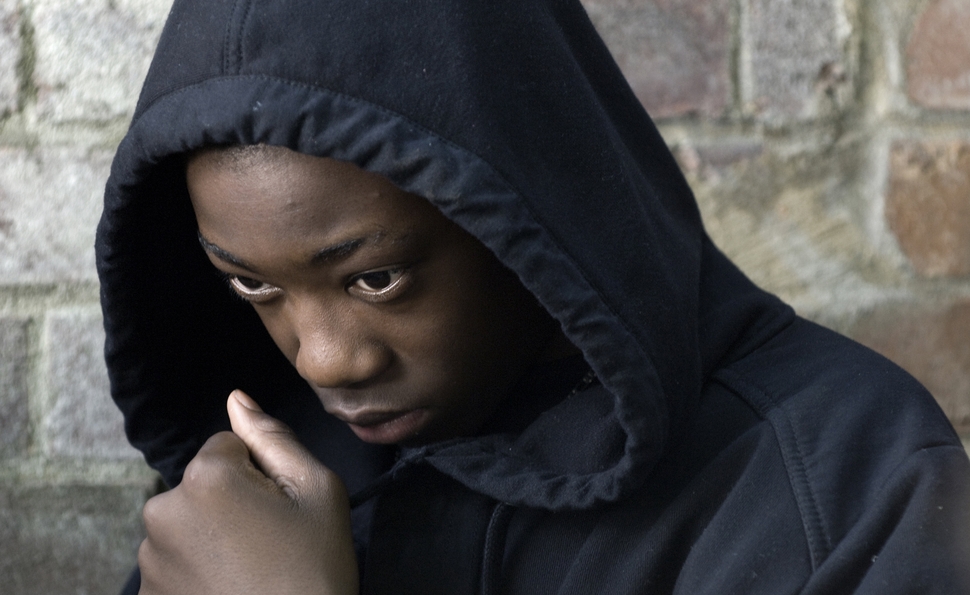 Peddling one-note social commentary via a storytelling mode that gets stuck midway between conventional and unique, Ill Manors mires itself in the familiar grime and muck of the urban inner city, where drug dealers deal, hookers hook, and users use to their vein-tapped delight. Writer-director Ben Drew opens his film with London dealer Aaron (Riz Ahmed) watching TV interviews with citizens who cite bad parenting and cruel foster homes as the reason for the city’s criminal scourge. That, it turns out, is all the film has to say about the cause of the illicit behavior it proceeds to depict in graphic detail. What ensues is yet another intertwined tale involving numerous cretins who all, at some point, cross paths in ugly, often fatal ways—though everything in Drew’s narrative can ultimately be traced back to (and blamed on) child abandonment and abuse.

That recurring theme manifests not only in Aaron’s sympathy for kids and the forced-into-murder situation of a young hustler, but also in the backstories Drew dramatizes via music-video-esque montages scored to hip-hop verses that narrate how each of the characters—including dealer Chris (Lee Allen), crack-whore Michelle (Anouska Mond), pregnant prostitute Katya (Natalie Press), and crack-slinger Kirby (Keef Coggins)—wound up in their current, lousy circumstances. It’s a strikingly fluid, propulsive means of conveying narration, not to mention one that’s in tune with the material’s gritty street-corner milieu. Yet despite being buoyed by this clever formal device, Ill Manors squanders it on underworld mini-dramas that are rote and, despite their wannabe-grim tone, more than a bit second-rate Quentin Tarantino in nature.

While Drew is interested in presenting a realistically ragged vision of 21st-century thug life, his stew of multimedia aesthetic gimmicks (cell-phone video, security-camera footage, time-lapse photography) proves uninspired. Moreover, he repeatedly fixates on stock scenarios—this foul-mouthed man owes that one money; that oppressed woman is trying to escape this maniac—that he ties together in a standard 1990s-crime-fiction way, undercutting any sense of realism. Convenient twists of fate and unbelievable behavior also play a part in the proceedings, culminating with a baby being tossed out a window to escape a raging fire. That just furthers the film’s bipolarity. Drew is caught between crafting a vivid, vérité portrait of social ills, and striving to deliver the colorfully profane, banter-heavy shenanigans of a Pulp Fiction or Lock, Stock And Two Smoking Barrels.

As befitting such subject matter, the cast’s performances are all crude bluster and mascara-streaked wailing. Ill Manors flip-flops between its various threads so swiftly that no in-depth characterizations emerge; rather, the film offers only the same old indistinguishable hoods and hookers. Drew’s all-things-come-together climax uneasily straddles the line between hope and cycle-of-violence pessimism, which mostly leaves the action feeling not ambiguous, but indecisive. That shortcoming, however, isn’t quite as grating as the penultimate scene’s bid for bathos via Aaron reading a letter from his birth mother—a weepy moment that, on the heels of so much tonally schizophrenic craziness, feels like an unearned, contrived, final bid for preachy profundity.