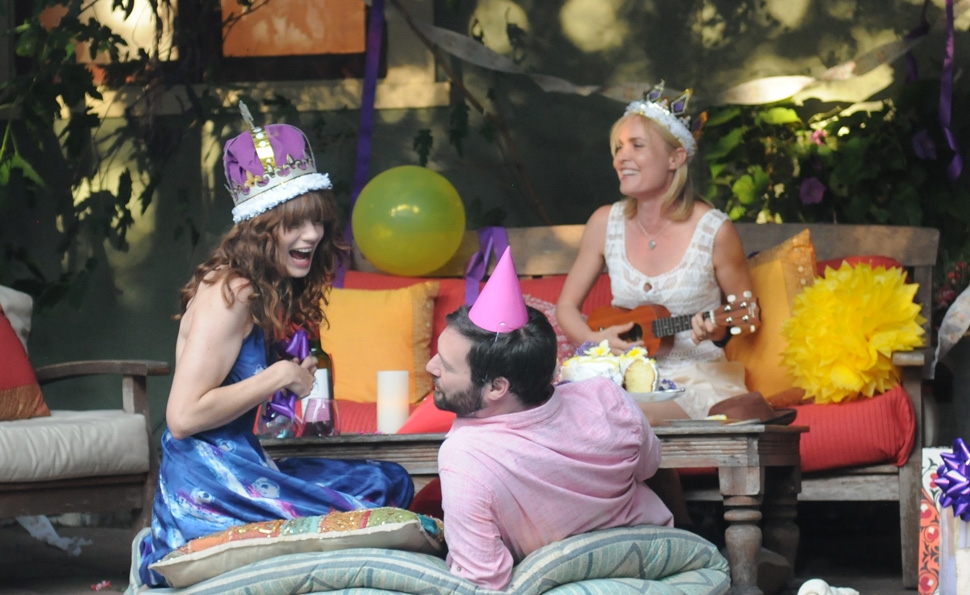 It’s hard not to feel a bit of cognitive dissonance watching Expecting, the feature debut of writer-director Jessie McCormack. As Andie and Lizzie, respectively, Michelle Monaghan and Radha Mitchell play longtime best friends. That would be evident from their body language, even if the film had no dialogue. They’re easy and affectionate with one another in the way only people who know each other well are. The film is ostensibly about the challenges their friendship faces when Andie, after the latest in a series of reckless hook-ups, discovers she’s pregnant. Meanwhile, Lizzie struggles to conceive a child with her husband Peter (Jon Dore). Further complications set in when Andie offers to let Lizzie and Peter adopt her unborn child, and they take her up on it. Yet everything in the film—every plot development, every line of dialogue—suggests Lizzie should run screaming whenever Andie, a walking disaster with a Sophia Petrillo-like inability to censor herself, enters the room.

The movie never really covers that problem. Though Monaghan is a gifted, underutilized actor, she never takes the character beyond obnoxious to endearing. Her performance in Expecting essentially has two modes: insulting and apologetic. In either mode, Andie seems like the sort of arrested-development case a couple of Peter and Lizzie’s age would have sidelined years ago. Then again, Andie isn’t the only high-maintenance person in their lives. After Andie moves in to wait out the end of her pregnancy, Peter’s adopted brother Casey (Michael Weston) re-enters their lives after leaving rehab, adding another combustible element to the already-volatile chemistry of Peter and Lizzie’s home.

There’s likely a funny movie to be made from that premise—or, failing that, a sensitive one that matches Mark Kilian’s score, a heart-tugging collection of strumming guitars and and plinking pianos. Expecting is neither. In fact, McCormack doesn’t seem to know what kind of movie she wants it to be. Her script fills some scenes with quips and and one-liners, particularly those with Mimi Kennedy as a sitcom-ready therapist, and lets others play as straight drama. It’s a queasy mix of tones and approaches that makes the film feel divided against itself.

At one point, Andie mocks Casey’s heroin habit during a ping-pong game. (Casey: “You talk a lot of smack.” Andie: “At least I don’t do a lot of smack.”) This is played as flirtatious banter, and a better film might have pulled it off. Here, it lands like a brick. It isn’t the film’s only rough-around-the-edges moment, either. One scene has Lizzie learning that Andie’s baby is now the size of a kiwi fruit, then refusing to eat a kiwi when offered one moments later. Elsewhere, McCormack’s script repeatedly stresses that Peter and Lizzie live in a house with a front gate that needs repairing and own a dog that doesn’t get walked enough, almost as if to warn those who might want to leave early that they’ll miss an exciting lost-dog sequence later in the movie. McCormack admirably tries to squeeze a lot of real-world messiness into Expecting, but her film’s essential phoniness refuses to make room for it.