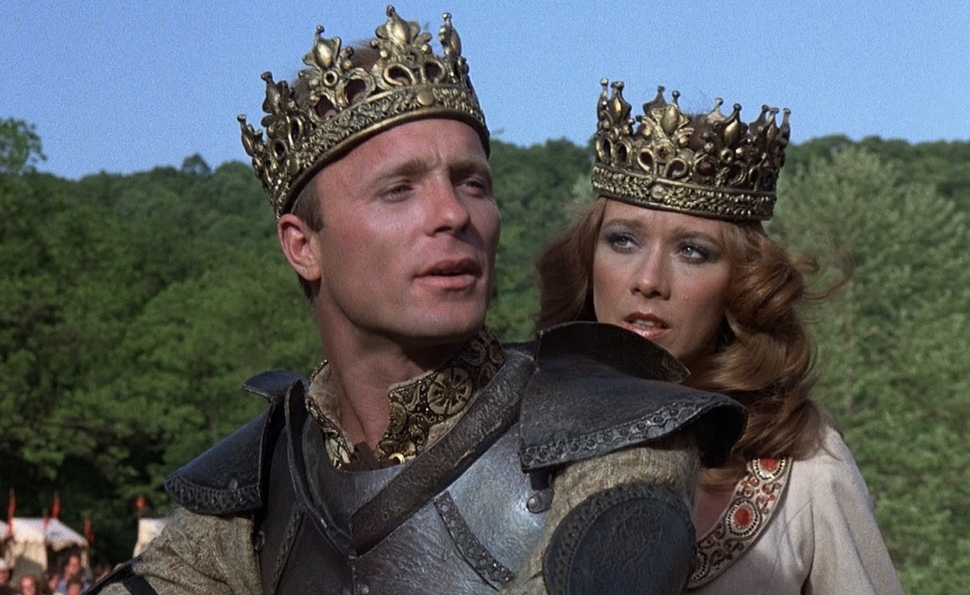 In the bonus features for the recent The Right Stuff Blu-ray, some of the movie’s cast members mention that they’d never met or even really heard of Ed Harris until he walked onto the set as John Glenn, and blew everyone away with his charisma, intensity, and integrity. Apparently none of those people had seen George Romero’s Knightriders, or they would’ve been well aware of what Harris could do in front of a camera. Harris was already 30 when he starred in Knightriders, but he only had one significant movie role under his belt (as the bad guy in the long-forgotten Charles Bronson film Borderline), along with a handful of guest shots in TV series. Then in summer 1980, he took the lead in Romero’s most curious and beautiful film, playing Billy “King William” Davis, the owner and operator of a traveling renaissance festival that wows yokels with its main event: a jousting tournament, using motorcycles instead of horses. From Harris’ first appearance in Knightriders, self-flagellating in a misty country lake, he’s a powerful presence. His King William has a vision of a more chivalrous world, where the like-minded gather and live cooperatively and honorably, under a courtly hierarchy. He’s fanatical about his dream to the point of being humorless and unreasonable—and few actors can play that kind of tenacious idealism like Harris.

The brilliance of Knightriders—and it is a brilliant film, even though no one paid it much attention when it was released in 1981—is that Romero clearly identifies with King William, yet doesn’t lionize him. Like Romero’s better-known horror movies, Knightriders admires human industriousness while remaining sour about humanity. Like the wannabe vampire in Martin, King William is dangerously indifferent to how the straight world regards him. And like the little fortresses that the zombie-fighters construct in Night Of The Living Dead, Dawn Of The Dead, and the other Dead films, the pseudo-medieval society of Knightriders is inevitably undone by louts and opportunists. Unlike Romero’s other films, Knightriders sounds notes of optimism, but Romero still acknowledges throughout—with no small amount of self-criticism—that King William’s prickliness may be preventing him from achieving something truly noble.

Knightriders can be interpreted as a metaphor, standing for Romero’s attempt to keep his circle of non-Hollywood mavericks intact in the wilds of Pennsylvania, at a time when men with fat wallets and small minds were flocking around them, distracting them with offers of big paychecks in exchange for big compromises. Knightriders’ plot has King William’s band of true believers splintering, because their show is becoming more popular, which is bringing new problems. The crowds are getting rowdier, especially during a closing event that allows locals with motorcycles to zoom freely around the arena. The media is starting to take an interest in Billy, seeing him as another Evel Knievel. And a promoter from the aptly named, potentially magic-killing Silver Bullet Enterprises wants to move the whole merry band away from small-town fairgrounds and into larger, better-paying venues, which tempts the court’s “black knight,” Morgan (played by Tom Savini), who freely admits he likes this gig because of the bikes, not “that King Arthur crap.”

Knightriders is about 50 percent scenes of kick-ass moto-jousting, 40 percent philosophizing around the campfire, and 10 percent lyrical shots of King William trying to exist in the same landscape as fast-food restaurants. The story is slight because Romero is really more interested in defining this community, and what’s special about it. “We’re not an ‘act,’” Billy complains at one point to his lawyer/manager, by which he means that the crafts fair, the concessions, and even the tournament are all means to an end, letting him and his followers—gay and straight, black and white, male and female—live in their own reality. By establishing that reality so well, Romero is able to express how tragic it is when it all starts to fall apart, and he’s able to show what it means to the king at the climax of Knightriders when his subjects gather for one last big battle, in the spirit of brotherhood and sisterhood, with no spectators to muddy the meaning.

Romero takes his time with Knightriders, and yet it’s paced surprisingly briskly for a 145-minute movie with very little plot and a whole lot of motorcycle fights. Romero uses all kinds of nifty storytelling tricks: having a public-address announcer explain what’s happening to the crowd (both those in the film and those watching the film); using popular music and insert shots of local bumpkins (including Stephen and Tabitha King) to emphasize the vulgarity all around the armored cyclists; letting Billy’s colleagues react with open exasperation every time he takes the moral high ground at the whole troupe’s expense. But mostly, Romero leans on Harris, who is so deeply present in every frame of this picture that it’s easy to see why so many amazing people would gather around his King William, even when he’s spitting fire about a culture that lets “some pimpy psychiatrist’s paperback” give them excuses to sell out.

It’s telling that on the back of the Knightriders Blu-ray, the cast is identified by other Romero films they’ve been in, which means the movie’s star is listed as “Ed Harris (Creepshow).” Forget The Right Stuff, Glengarry Glen Ross, Apollo 13, and The Truman Show. As Knightriders’ tale of friendly fanatics proves, working with George Romero means being in his company for life.

A jovial, occasionally sentimental Romero/Savini commentary track (with contributions from Martin star John Amplas, who has a small role in the film) is transferred over from the old Anchor Bay DVD edition of Knightriders. New to Shout! Factory’s Blu-ray—besides a much crisper, less fuzzy transfer—is some home-video footage of the stunt rehearsals, and a trio of interviews, running a little more than 10 minutes each. Tom Savini talks about how the summer they made the movie was like three months of camp, Harris describes what taking his first big leading role did for his confidence as an actor, and Romero talks about how the independent-film business let him down when it was time to market and distribute Knightriders, although it did give him the artistic freedom to make what he still considers his second-favorite picture, after Martin.