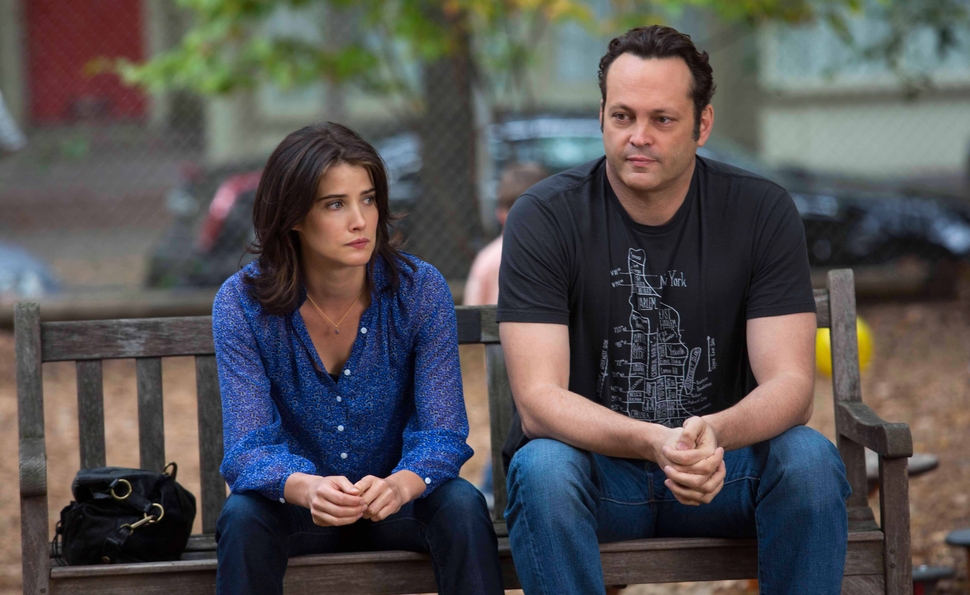 Although Vince Vaughn is the physical embodiment of the everyman, his odd blend of smugness and sadness has routinely made him an uncomfortable fit as a sympathetic leading man. He’s a little too self-satisfied to be the guy viewers root for, but a little too hangdog to be the guy they root against, so they mostly end up just tolerating him, for lack of any stronger reaction. Vaughn can work well as a comedic accompaniment, particularly when playing up his jerkier side, as in Swingers or Wedding Crashers. But thus far, he’s struggled with characters who behave like real human beings in the face of the high-concept situations he seems to gravitate toward.

Delivery Man is another such high-concept story, one lifted verbatim from the well-received 2011 Quebeçois film Starbuck, also directed by Ken Scott from a script he co-wrote with Martin Petit. Scott takes a plug-and-play approach to the Hollywood adaptation of his original French-language film, swapping out a few Canada-specific cultural references and swapping in a few recognizable American names in an otherwise beat-for-beat replica. (The repurposing also extends to large swaths of dialogue, including some lines that don’t make the leap from Canadian to U.S. sensibilities, such as a reference to legally required parental leave.) On the surface, Vaughn seems like a good English-language substitute in the role of David Wozniak, a schlubby, debt-riddled loser who finds out that the year and a half he spent donating sperm when he was younger has, due to an ill-defined clerical mixup, resulted in him unknowingly fathering 533 children—142 of whom have filed a class-action lawsuit against the sperm bank, demanding it reveal their father’s identity.

David is a perpetual screw-up who can’t even handle the demands of his job as a delivery driver for the family meat business, the sort of careless, self-centered man-child suited to Vaughn’s particular skills. But Vaughn backs up against his own limitations when the script requires David to grow up—not because he has to, which is a common trial of the cinematic man-child, but because he wants to. Learning that he’s a parent 533 times over (about to be 534, as he’s recently knocked up his girlfriend Emma, played by Cobie Smulders) inspires David to try becoming a good person; as he puts it, “I have officially decided to have a life.” For him, that means insinuating himself into the lives of his biological children without telling them who he is, much to the frustration of his lawyer Brett, played with characteristically goofy charm by Chris Pratt. David’s quest to get to know the kids one by one is an act of ego wrapped in idiocy, but Delivery Man frames it as an act of personal growth, of learning to be selfless and seeing the good in other people. Patrick Huard, who originated the role in Starbuck, just barely pulled this off through a combination of wide-eyed wonder and low-key jocularity, but Vaughn’s David seems to constantly vacillate between reluctance and borderline mental instability as he drags himself through his project.

Vaughn’s performance isn’t dire—he believably captures the combination of fear and curiosity inherent in the situation—but it definitely hurts Delivery Man, which requires its leading man to project a certain lovability to sell David’s questionable behavior. If he were old enough to have believably fathered hundreds of adult children, the ever-endearing Pratt might have been a better fit as David, with Vaughn swapping into the role as David’s frustrated, put-upon lawyer, whose four kids have instilled in him a deep cynicism about children and life in general.

David’s kids all seem desperate to know him and become deeply attached to him once they do, but the script spends more time explaining how great David is than Vaughn spends exhibiting that in his portrayal, making his offspring’s magnetic attraction to him puzzling. (Also puzzling, and a little infuriating: Delivery Man’s suggestion that David’s children finding him, and each other, has instilled in them a sense of family and belonging that they heretofore hadn’t experienced, though they were all presumably birthed by mothers who wanted them badly enough to patronize a sperm bank.) Further complicating this perception is the lawsuit aspect of the story, which spins out into a money-grabbing countersuit prompted by David’s debt to a shady unnamed organization, all of which combines into a muddle of questionable motivations painted over with loudly proclaimed emotion.

Delivery Man has sentiment and affability embedded in its DNA, but Scott and Vaughn don’t do enough to nurture the film to its full potential. A more committed performance from Vaughn and a willingness to self-edit from Scott might have drawn out some of the interesting ideas about family, biology, and narcissism broached by its outlandish plot. Instead, it’s little more than tabloid fodder, a goopy human-interest story stretched to feature length.