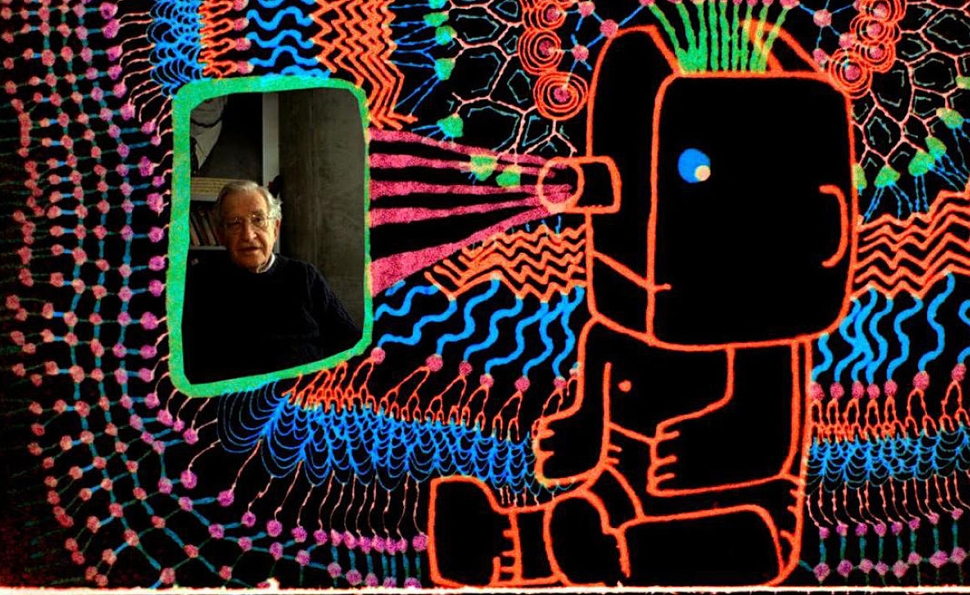 Is The Man Who Is Tall Happy?: An Animated Conversation With Noam Chomsky

Because so much of the important work by linguist Noam Chomsky involves the processes of human cognition, watching Michel Gondry’s documentary Is The Man Who Is Tall Happy?: An Animated Conversation With Noam Chomsky can’t help but become an exercise in questioning Gondry’s choices as a communicator. As the title implies, this is an animated feature, taking several conversations that Gondry had with Chomsky over the course of many months and illustrating them with little cartoons. Sometimes Gondry uses pen-and-ink drawings to show scenes from Chomsky’s life, or to literalize some of his more abstract examples. Sometimes he does this with stop-motion, or xerography, or by juxtaposing live-action footage and old photos. His reasons are twofold. Gondry has said that drawing these pictures helped him understand what Chomsky was saying to him, which was important, since English isn’t his first language; he also means to spare the audience the tedium of just watching two men talk for an hour and a half. But is the animation actually useful, or is it just diverting, like doodling through a college lecture?

Mostly, it’s one big doodle. When Chomsky talks about how teaching should be thought of as the act of moving students down a stream of knowledge, rather than pouring that knowledge into otherwise empty vessels, it doesn’t add much to see an animated drawing of a pitcher, or a river. More often than not, Gondry’s artwork sticks with the obvious. It’s also a drag that Gondry doesn’t seem to have approached this project with any kind of grand design beyond having a few chats with Chomsky, then animating them. The film is largely structureless: Some of it’s tantamount to a biopic, and some of it’s more like an essay. Gondry does his best to steer his sessions with Chomsky such that the professor’s past connects to his theories of language, but Gondry’s own difficulties with English and Chomsky’s occasional impatience with the line of questioning mean that Gondry just gets what he gets: a hodgepodge of philosophical analogies and personal reminiscences.

Yet even though Gondry and Chomsky’s very different sensibilities don’t mesh in such a way that either man’s work gains substantially from the alliance, they’re each such good company individually that Is The Man Who Is Tall Happy? is still entertaining. Gondry’s animation isn’t as inspired as it might’ve been, but it’s colorful and often beautiful—much more so than a mere talking head would be, to be sure—and at moments, Gondry’s approach has an unexpectedly moving effect, such as when Chomsky talks about his bond with his late wife, and Gondry cuts the chatter for a minute or so while he draws a happy couple living their lives. Meanwhile Chomsky, well-practiced at imparting lessons, makes a strong case for the necessity of disregarding assumptions when it comes to working as a scientist, presenting as examples both the historical revolutions of Galileo and Newton and his own unwillingness as a student to prove that he understood things that were already well-known.

Gondry’s wisest choice with Is The Man Who Is Tall Happy? is that he embraces his movie’s unwieldiness. He admits to his frustration with the arduousness of animation, and openly points out to viewers the times when he failed to get his question answered because he framed it improperly. Gondry even notes that he almost cut an exchange with Chomsky about the origins of inspiration because the professor seemed to endorse pot-smoking, which Gondry says he’d rather not promote. In short: Gondry cops to being overmatched, as a dilettante scholar in the presence of one the most famous intellectuals of the past 50 years. So the film becomes a document of his experience as a wide-eyed wonderer, trying to make sense of the concept of “psychic continuity,” and probing for an explanation as to how the very young distinguish language from other noises, and getting a crash-course on the history of science as it moved past an era where everyone expected nature to be easily explicable. Is The Man Who Is Tall Happy?, like Gondry himself, captures the spirit of Chomsky’s own maxim: “If you’re willing to be puzzled, you can learn.”

GoWatchIt: Buy. Rent. Stream Is The Man Who Is Tall Happy?: An Animated Conversation With Noam Chomsky