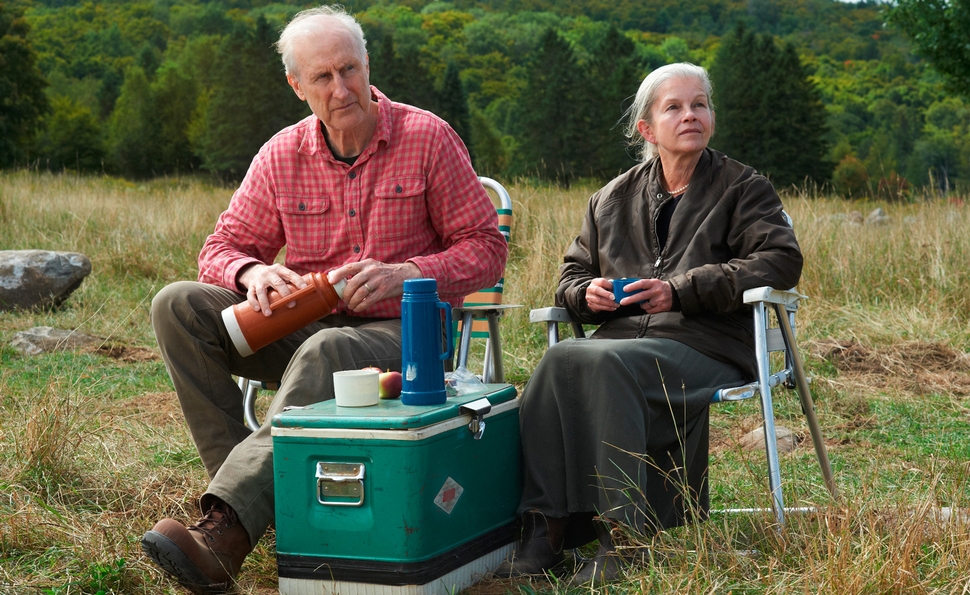 Once upon a time, owning a piece of land meant you could do whatever you wanted with it. Those days are long over in most industrialized nations, however, as a Canadian octogenarian named Craig Morrison found out the hard way a few years ago, when he attempted to build a new house on his property without first consulting the building code. Inspired by Morrison’s true story, Still Mine will appeal to those for whom no four-letter word can match the four-syllable ugliness of “bureaucracy”; it’s a tried-and-true tale of sturdy self-reliance triumphing over government interference. But the film is less effective as an inspirational saga than as a simple portrait of a marriage in its twilight years, with the house-in-progress serving as a metaphor for love that endures by being constantly renewed. Yes, it’s Life As A House again! But considerably less stupid this time, thankfully.

Morrison was 88 years old when he started construction. Writer-director Michael McGowan has fudged a little by casting 73-year-old James Cromwell, but it’s a worthwhile compromise. Cromwell is allergic to showboating, shrewdly playing Morrison not as a self-righteous iconoclast, but as a frustrated guy who does his best to comply with regulations until they cross the line into sheer uselessness. One of his cited violations, for example, is using wood that hasn’t been “stamped”—that is, officially approved for use in construction. A report from a qualified investigator asserting that Morrison’s old-growth spruce not only meets but exceeds the requisite standards, however, impresses nobody. The rules weren’t followed, and that’s all that matters. Problem is, Morrison can abide by a stop-work order for only so long, as he’s building this one-story house to make life more manageable for his wife, Irene (Geneviève Bujold), who suffers from Alzheimer’s and can no longer cope with the stairs in their current dwelling.

While the legal battle is the obvious hook—and the movie begins and ends with an impassioned, folksy courtroom speech by Morrison, more or less daring the judge to throw him in jail—McGowan ultimately seems more interested in the tender relationship between two elderly people who still share a real connection (and a healthy sex life) after more than 60 years together. Cromwell and Bujold have an easy, convincing rapport, creating a detailed emotional history for this couple that makes them seem devoted, and not mere twinkly geriatric clichés. The characters treat Irene’s progressive memory loss as a series of roadblocks to be navigated; many of the film’s best scenes feature them lying beside each other in bed, reminiscing about a tryst they had in a moving car, or joking about potential affairs from decades earlier. Morrison’s interactions with his adult children, who keep stopping by to offer help and (usually unwanted) advice, feel equally lived-in.

After a while, those pesky government watchdogs become as much a nuisance to the movie as they are to its protagonist, even though they’re the reason the movie exists in the first place. Still Mine is based on a true story, but the parts that McGowan largely made up feel most true.