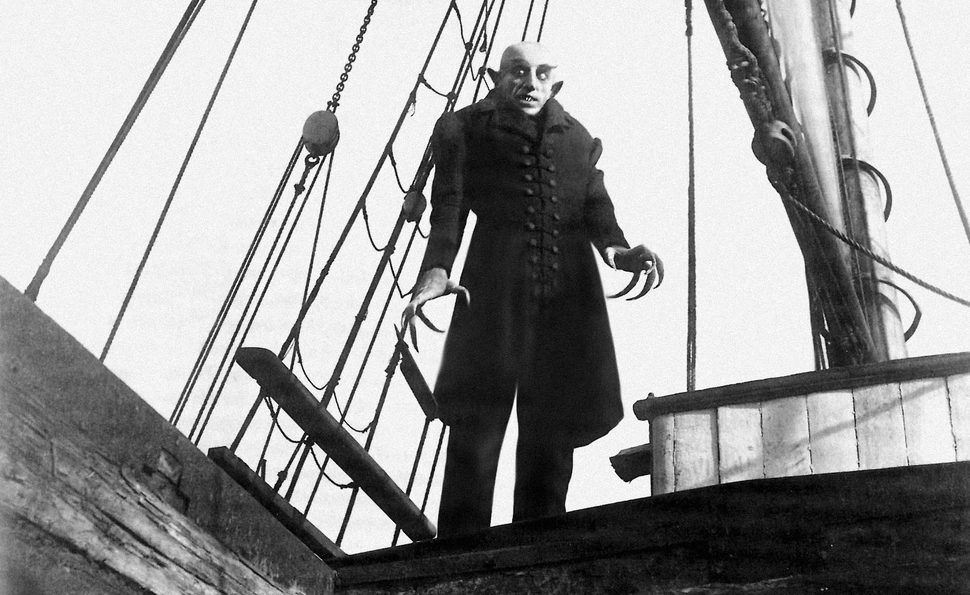 Max Schreck was one creepy-looking son of a bitch. F.W. Murnau’s 1922 silent vampire classic Nosferatu doesn’t lack for special effects—an animated shadow stretching across a wall, a stop-motion sequence to simulate speed, a spectral superimposition—but the movie’s best effect is its star. With his long face and sunken eyes, Schreck fit right into his makeup and prosthesis while playing the aristocratic bloodsucker Count Orlock for Murnau. He looks every bit like an actual demonic wild-thing, retrieved from deep within the German wilderness and trotted out to perform for Murnau’s camera. And it looks like at any moment, he could snap his chains and savage the cast and crew.

Nosferatu was almost lost to the ages, not for the usual reasons that so many silent films are long gone—damage, neglect, fly-by-night distribution—but because the courts ordered that it be destroyed. Murnau’s patrons, the fledgling company Prana Film, hired him and screenwriter Henrik Galeen to adapt Bram Stoker’s gothic horror novel Dracula, but didn’t bother to secure the rights, and were successfully sued by Stoker’s heirs. The Stoker estate had a convincing case: Nosferatu strips the Dracula plot down, but it is the Dracula plot: a businessman (played by Gustav von Wangenheim) travels to a remote castle to make a deal with a mysterious Count. Then the Count reveals himself to be a vampire, incapacitates his visitor, hops a ship, and heads to the city, where he spreads death.

But there are essential differences between Nosferatu and Dracula, which explain why the film survived a court order, remaining popular enough to stay in circulation, albeit clandestinely. For one thing, Nosferatu is deeply steeped in European folklore: not just vampires, but werewolves and phantoms. Early in the film, von Wangenheim’s character, Thomas Hutter, stays at a country inn near Count Orlock’s castle, where his room contains a book about the area’s various creatures of the night. At bedtime, the text spooks him; by day, he laughs and flings it to the floor. Murnau’s approach to Nosferatu was to treat the material as real, not laughable. Much of the movie was shot on location in Old World villages and towns, and though Murnau can’t avoid the odd theatrical flourish—in keeping with both his personal style and the era’s expressionistic bent—Nosferatu has the ring of truth.

Much of that is due to Schreck. Nosferatu, like nearly every vampire movie ever made, has its metaphorical qualities, suggesting that an ancient malevolence was due to sweep across Europe like a plague—which was prophetic, given what happened in Germany over the subsequent two decades. But Count Orlock himself is such a singularly freaky creation that he mostly just represents himself. Shreck and Murnau don’t make Orlock seductive, the way Bela Lugosi and so many others later did with Count Dracula. Even when he’s sucking the blood from Hutter’s pricked finger and asking, “Can we not stay together a little longer, my lovely man?” it doesn’t feel like a come-on. Orlock looks diseased, and if he doesn’t try especially hard to sell his charms to Hutter, it’s only because he’s aware of his own sickly inevitability. No matter what, he’s bound to rise up out his box and take his due.

The set comes with two Blu-ray discs, offering a choice of English or German intertitles. The English disc adds a selection of excerpts from eight of Murnau’s surviving films, from both before and after Nosferatu. The excerpts show Murnau fusing elements of expressionism and social realism, in service of stories steeped in both the trials of everyday life and the fantastical. But the big extra here—also on the English disc—is an hourlong portion of Luciano Barruiatúa’s documentary The Language Of Shadows, covering Murnau’s early life and the making of Nosferatu. The Language Of Shadows provides even more context for what influenced Murnau, describing his social circle of leftists, artists, and occultists, explaining why he saw no real difference between tales of the supernatural and tales of proletariat struggle.