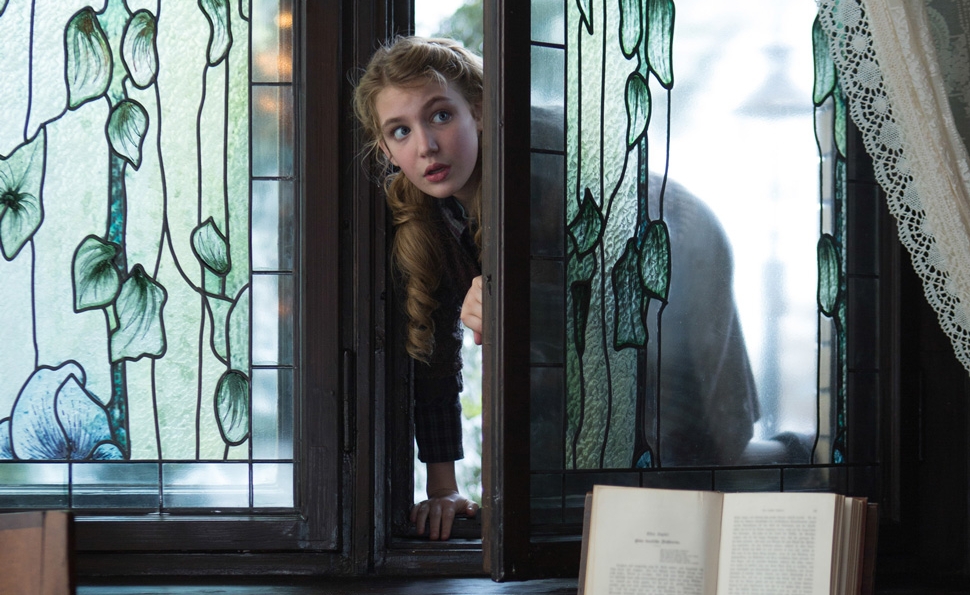 There’s never just one thing going on in The Book Thief, a glossy, wide-eyed Holocaust story adapted from Markus Zusak’s bestselling 2005 novel. The protagonist, 9-year-old Liesel (Sophie Nélisse), isn’t just watching the Nazi party assert its power as Germany descends into fascism: She’s also dealing with her illiteracy, coming to terms with her difficult foster mother and gentle foster father, and navigating an early romance with the boy next door. And also learning to be a writer, and learning how art helps people survive calamity. And also mourning the death of her 6-year-old brother. And dealing with a vicious bully. And assuaging the loneliness of an upper-class woman whose son seemingly died in World War I. And helping shelter a Jewish refugee in the basement. The threads are woven tight through this novelistic tapestry, but there’s a sense that any one of them might have been plucked out and isolated, then turned into a more resonant, personal, and keenly felt film.

Instead, The Book Thief crams story after story into such a small space that it can’t realize any of them in depth. So rather than develop its ideas, screenwriter Michael Petroni and director Brian Percival focus on selling individual moments through wide-eyed, forceful acting and a pushy John Williams score. The dialogue overemphasizes each emotion, while the narrative glides along on the addictive power of sentiment. There’s never any risk that the audience will spend a moment or two not knowing exactly what to feel. There’s no sense of risk to the film at all.

Nélisse is a polished, assured, entirely artificial presence as Liesel, a blonde porcelain doll-girl who stands in for innocence and humanity in a standard story about how people struggle to maintain either in wartime. The film opens with a purring, lugubrious voiceover from a personified Death (Roger Allam), who expresses a personal fascination with her and decides—while claiming her brother—to keep an eye on her. The Death-as-interested-observer conceit is strange, and Death’s adoration of Liesel is even odder, and never particularly explained. But like so many other threads, this one exists largely to justify a single later scene, rather than to define anything unique or daring about the story.

Liesel’s mother, a communist sympathizer fleeing the Nazis, parks Liesel with hateful Rosa (Emily Watson) and kind Hans (Geoffrey Rush) then disappears, leaving Liesel to begin a new life that feels as brightly artificial as The Sound Of Music, particularly where the Nazis are concerned. Swastika banners spring up everywhere, Jews are rounded up, books are burned, and the war drums start, each prompting a single moment where Liesel looks sad and doubtful while viewers check off boxes on a mental timeline, knowing what’s coming next. Meanwhile, Liesel hones her literacy, hangs out with cherubic boy-next-door Rudy (Nico Liersch), and talks with Max (Ben Schnetzer), the saintly Jewish teenager Rosa and Hans are hiding in the basement, out of obligation to his long-dead father. There’s the ghost of a strong narrative idea in the concept that Max isn’t the center of Liesel’s wartime childhood, so much as just one more element to balance during a busy, difficult period—at its best, The Book Thief does capture that sense that children can adapt to anything as normal, given the right cues from the adults around them. But the treatment does Max no favors; he isn’t a character so much as a doe-eyed household fixture who spouts helpful advice and never discomfits anyone with his own personality, or with any needs past his constantly failing health.

Films that put a shiny prestige-picture lacquer on the Holocaust virtually always divide audiences. Roberto Benigni’s Life Is Beautiful was nominated for seven Oscars and won three, but still has a reputation as a toxically twee look at a grim subject. More recently, films like The Reader, The Boy In The Striped Pajamas, and Sarah’s Key brought different strains of swooning melodrama to the era, each by filtering events through the perspectives of young people caught up in events they can’t understand. The risk is always laying on the protagonists’ naïveté too thickly. To an audience well-versed in history, a wide-eyed child asking, “But where did all the Jewish people go, mamma?” can either seem tragic, or offensively disingenuous. The Book Thief leans further toward the wide-eyed schmaltz side of the line, with its seemingly endless big, dramatic, emotional moments, and its failure to earn them. Visually, the film is beautiful, but there’s something uncomfortably ugly about the way it attempts to manipulate viewers with every element, and its willingness, when all else fails, to fall back on the emotional power of cute kids being physically or emotionally wounded. It pours syrupy softness over every aspect of the production, from the golden light of the cinematography to the cast’s buttery German/English hybrid dialect and accents. (There’s a lot of “Nein, mein liebling, und ze rest of zis sentence vill be in English.”) It even, most astonishingly, finds a way to soft-pedal and romanticize mass death. It’s the Holocaust with training wheels, sketched in treacle.