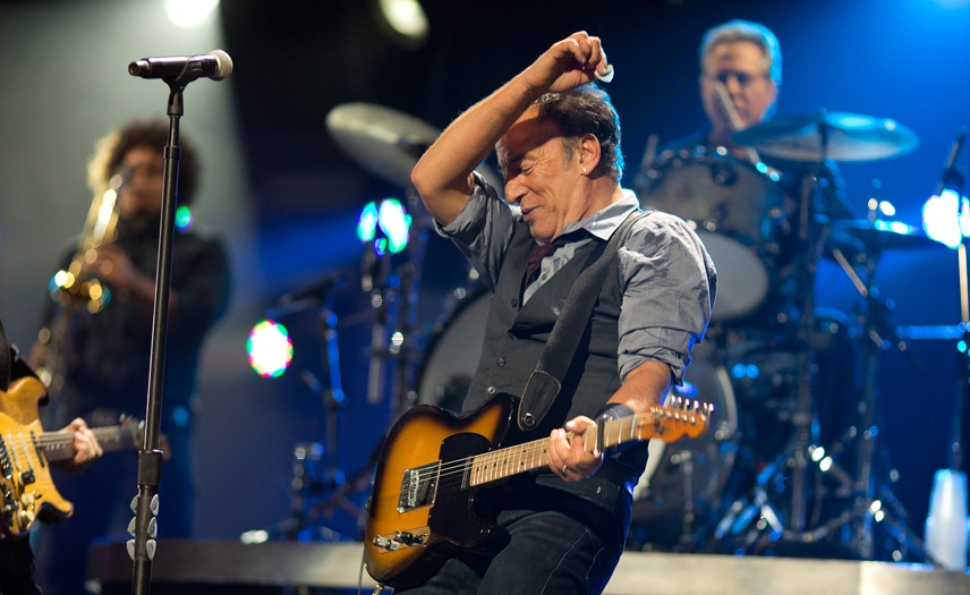 “Music,” says Cablevision CEO James Dolan in an early scene from 12-12-12, “is the language of the soul. There’s no better language to express this.” “This” is the New York area’s anguish in the wake of last year’s devastating Hurricane Sandy, as voiced, comforted, and aided by the enormous benefit concert that gives this documentary both its title and subject. But if music is the best language to express this, Why make the movie? There’s already a CD and a DVD of the 12-12-12 concert. What can this doc provide that they don’t?

Context, for one thing. Filmmakers Amir Bar-Lev and Charlie Lightening are able to cut away from performances by Bruce Springsteen, The Who, and others to show Sandy’s devastation, and to hear stories from survivors and first responders. (Billy Joel calls himself and his fellow performers “second responders.”) With seemingly unlimited access to the show, they can also peek behind the proverbial curtain to glimpse the work that goes into pulling off a massive undertaking like this benefit, from early planning to rehearsals to the madness of directing a live television broadcast.

In its best moments, that approach works to connect everything: the fans, the bands, and the important reason they all came together last December in Madison Square Garden. In its worst moments, it’s half as fun as a concert movie and half as informative as a documentary about the storm. It’s full of jarring, not particularly pleasant transitions, like a Roger Waters song punctuated by repeated scenes of Dolan browbeating his underlings while they try to fix an outage on the concert’s website. (If his employees weren’t comfortably numb before, they sure are now.)

The original 12-12-12 concert was about six hours long; 12-12-12 is about 100 minutes, so a lot is cut out, and what’s left in is often shortened or broken up by interviews. There’s a lot more of executive producer Paul McCartney offstage—getting a manicure, rehearsing with Alicia Keys, singing the theme song to The Monkees—than there is of him onstage; his eight-song set is condensed to a little of “Cut Me Some Slack” with the surviving former members of Nirvana, and a little of “Live And Let Die.” Improbably, one of the few acts that doesn’t get montaged is Adam Sandler, singing a funny, surprisingly moving tribute to New York City, to the tune of Leonard Cohen’s “Hallelujah.” It’s odd that Bruce Springsteen And The E Street Band don’t get an uninterrupted song and The Wedding Singer does, though on the basis of his one scene, it might be Sandler’s best movie in five years.

12-12-12’s photography is respectable but unremarkable, better in intimate scenes than larger ones. Bar-Lev and Lightening are flies on the wall for some amusingly candid moments between the performers: Fred Armisen cracking jokes in Macca’s dressing room; Stephen Colbert gently teasing Brian Williams over his firefighter helmet. They also witness the rare, appealing sight of celebrities geeking out over celebrities: Chris Rock cheers on The Rolling Stones, while Quentin Tarantino tells Reverend Jesse Jackson he always loved him in Wattstax.

These snapshots do suggest a community of artists that mirrors the communities affected by the hurricane, but mostly, they just seem shoehorned in as a way to differentiate this film from the existing 12-12-12 ancillary materials, and to lighten the mood between brutal clips of Sandy’s wrath and Governor Andrew Cuomo declaring, with unsettling prescience, that storms like this will happen again. Occasionally entertaining but rarely memorable, 12-12-12 never goes beyond the level of a really good bonus feature on a special-edition concert CD. If it raises more money for Hurricane Sandy’s victims, that’s great. But had it used the language of film in a really specific and engaging way, that would have been even better.