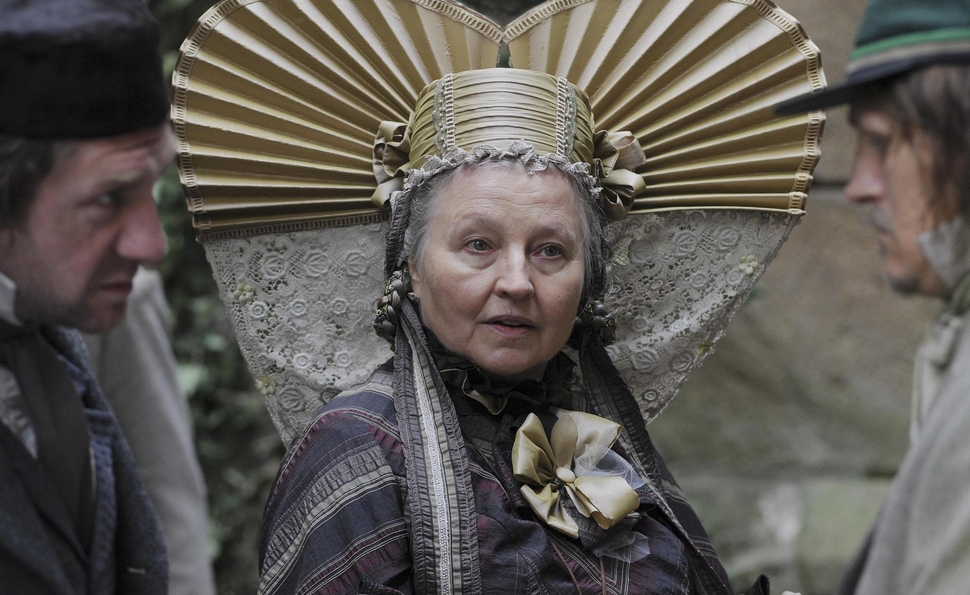 Since 1999’s Moloch, about Adolf Hitler’s retreat to Bavaria with Eva Braun, Joseph Goebbels, and Martin Bormann, Russian director Alexander Sokurov has been working intermittently on a series of films about the corruptions of power, each with a distinct tone and visual texture. He followed up Moloch with 2001’s Taurus, a mournful chamber piece about the last days of Vladimir Lenin, and 2005’s The Sun, an uncharacteristically funny portrait of Emperor Hirohito in the waning days of World War II, including his encounter with General Douglas MacArthur. Now Sokurov has completed the tetralogy with Faust, based on the classic German legend about a deal with the Devil—a fitting postscript to three stories about 20th-century historical figures who struck catastrophic bargains of their own.

Freely adapted from Goethe’s two-part play, Sokurov’s Faust is a work of crushing tedium, relieved only by the spare moments of beauty that pop out like dandelions in a washed-out landscape of oppression and grotesquerie. Some of that seems by design: not the tedium, perhaps, but the fleeting moments of wonder and transcendence that carry a near-constant cost of suffering against a 19th-century backdrop that roils in physical and spiritual ugliness. The devil always gets the better of the Faustian bargain—knowledge and worldly pleasures are never worth a soul—but in Sokurov’s version, the payment comes due almost instantly. Faust’s soul is rotting long before he signs it away.

After a wonderful, CGI-assisted establishing shot of a storybook village nestled between the mountains and the sea, Sokurov cuts to a close-up of a corpse’s rotting penis, a better indicator of the film’s agenda. Though falling into the same poverty that grips the rest of the village, Dr. Faust (Johannes Zeiler) has convinced gravediggers to give him this body on credit. But after fiddling with the dead man’s organs and intestines, he decides he’s no closer to learning the location of the soul. He unsuccessfully tries to pawn his wares off on the Moneylender (Anton Adasinsky), a.k.a. Mephistopheles. He’s a man of repulsive shape and smell, but the two strike up a conversation that carries through the rest of the story. Faust longs for enlightenment, but his eyes are drawn to the luscious but inaccessible Margarete (Isolda Dychauk), whose brother he inadvertently kills in a tavern. Torn by lust and shame, Faust offers his eternal soul to the Moneylender for just one night with Margarete, and signs the pact in blood.

The signing doesn’t happen until 105 minutes into Sokurov’s 134-minute movie, and the oblong structure gives Faust and his new friend plenty of time to philosophize obliquely in an earthly hell. Sokurov and cinematographer Bruno Delbonnel, who lends a similarly burnished beauty to the new Coen brothers film Inside Llewyn Davis, luxuriate in this vividly diseased village, which is often contorted as if they were shooting through an empty liquor bottle. But the foreground is full of talk, talk, talk—much of it obscure or indecipherable, nearly all of it a subtraction from the urgency and moral peril of Faust’s quest. When Faust finally puts blood to paper, Sokoruv summons a few spectacular images to match the F.W. Murnau standard, but getting there is the bad end of the deal.