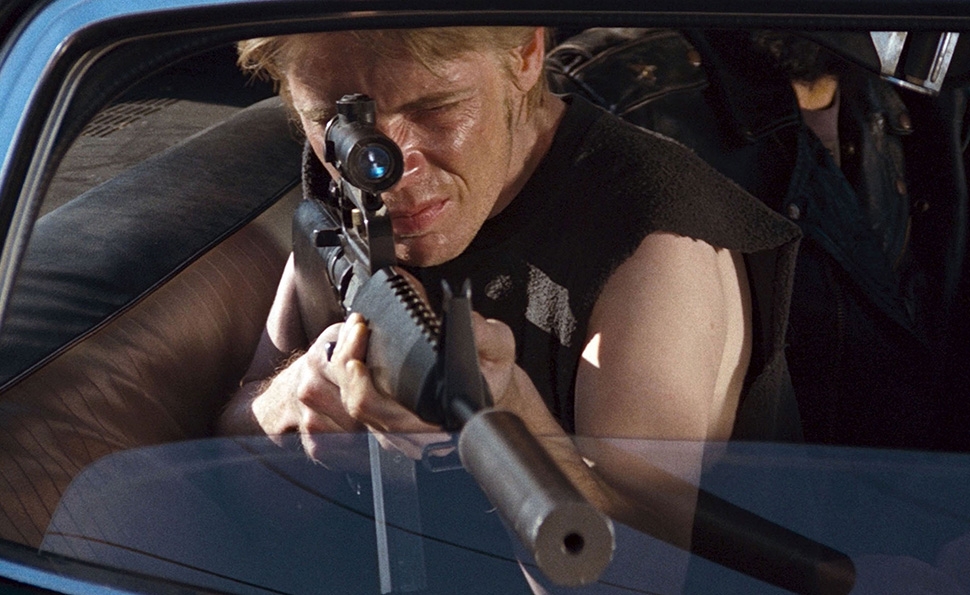 Early in the lurid 1976 thriller Assault On Precinct 13, writer-director-composer-editor John Carpenter throws down the gauntlet in a harrowing sequence where a little girl (played by future Real Housewives Of Beverly Hills star Kim Richards) returns to an ice-cream truck after receiving the wrong flavor of cone, and is murdered by gang members for her efforts. The film doesn’t linger on the murder or its aftermath, but the effect is chilling. Carpenter was sending out a warning that no one was safe in his world, that everyone was a potential target, including adorable little girls who just want to eat a cone of vanilla-twist ice cream in peace. According to a Q&A included in the new Assault On Precinct 13 Blu-ray, the MPAA threatened Assault with an X rating if Carpenter didn’t remove the shooting, but Carpenter was unfazed, and Assault made it onto the screen with the infamous scene intact—and an R rating.

In Assault On Precinct 13, Carpenter, who made his directorial debut in 1974 with the anarchic science-fiction comedy Dark Star, created an action thriller with the atmospheric dread and underlying bleakness of a horror movie. The film takes place in a run-down ghetto in Los Angeles, so remote and cut off from the rest of the city that it might as well reside in an alternate universe. It occupies a world devoid of safety and security, where the bad guys perpetually have the good guys outnumbered and outgunned.

Borrowing liberally from the plot of Rio Bravo, the overt inspiration, Assault On Precinct 13 casts a terrific Austin Stoker as Ethan Bishop, a smart, efficient police officer assigned to work in a run-down police precinct. On its final day, it ends up temporarily housing death-row inmate Napoleon Wilson (Darwin Joston) after one of his fellow prisoners on a bus gets sick. The black cop and the dry-witted white super-criminal form an unlikely but successful partnership of convenience when the police station is attacked by a shadowy, multiracial contingent of gang members out for revenge after an LAPD raid kills six of their members.

The gang in The Assault On Precinct 13 is a lot like masked murderer Michael Myers, the star of Carpenter’s slasher-film follow-up, 1978’s Halloween. They are a force of overwhelming and conscienceless evil. Carpenter doesn’t psychoanalyze his heavies. Like everyone else in Carpenter’s existential universe, the bad guys are defined not by their words or emotions, but by their actions and their unrelenting, uncompromising aggression.

From the very beginning, Carpenter was a genius at making a little go a long way, both in terms of resources and dialogue. Napoleon doesn’t say much beyond asking for a smoke with such dogged frequency, it quickly becomes his catchphrase. He doesn’t have to. Joston can do more with a wry look than most actors can do with lengthy monologues. Like Kurt Russell, who became Carpenter’s favorite actor, Joston understood that less is more, and that coolness requires an effortlessness that cannot be faked. Yet as impressive as Stoker and Joston are, they’re upstaged throughout by Laurie Zimmer as Leigh, a police secretary who evolves into a sexy badass in a time of crisis.

Carpenter intermittently cuts to shots of police officers in patrol cars in the area, trying to figure out what’s happened to the police station and why its phone lines have gone dead, but otherwise, the film boasts an claustrophobic intensity that puts audiences in the besieged police station alongside its overmatched but determined protagonists. In Assault On Precinct 13, hell is an abandoned police station in Los Angeles and the only means of survival is cooperation across racial, class, and legal lines. In combining the dread and survival politics of George Romero and The Night Of The Living Dead with the macho heroics and succinct wit of Howard Hawks, Carpenter found his own voice and changed the course of genre filmmaking. 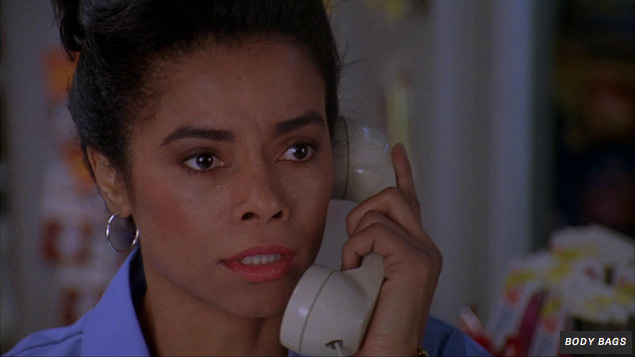 The ensuing years would be filled with triumphs and failures, disappointments and comebacks, but Carpenter was undeniably on a downward slope, creatively speaking, when he lent his talent and face to Body Bags, a 1993 Showtime television movie. Body Bags follows very closely in the ghoulish, cobwebbed footsteps of omnibus franchises like Tales From The Crypt (the comic book, HBO series, and later film series), Tales From The Darkside, and George Romero and Stephen King’s Creepshow.

The surprise this time around is that Carpenter is in front of the camera as well as behind it for two of the anthology’s three tales of terror (the third segment, “Eye,” is directed by Tobe Hooper, who also pops up in a rare acting cameo). A bad actor by his own estimation, Carpenter is a whole lot of fun here as “The Coroner,” an undead mirth-maker in the Cryptkeeper mold who narrates the proceedings with morbid humor and a weakness for ghoulish wordplay. Stealing shamelessly from Michael Keaton as Beetlejuice, his admitted inspiration, Carpenter makes The Coroner a goofy delight.

Carpenter and Hooper are far from the only icons of horror onscreen: stunt casting represents half the fun. Fellow horror director Wes Craven pops up by for a memorably creepy early cameo, as do Sam Raimi and Roger Corman, while supporting roles are filled by the likes of Twiggy, David Warner, Deborah Harry, Charles Napier, Robert Carradine, Tom Arnold, Sheena Easton, and David Naughton, who earned some measure of cult fame as the star of An American Werewolf In London, as well as the voice of Dr. Pepper’s “Be A Pepper” campaign.

Carpenter’s kitschy intros establish an appropriately campy tone for three tales of low-budget horror. “The Gas Station,” the first segment, hearkens back to the atmospheric minimalism of Assault On Precinct 13 in its tale of a plucky gas station attendant Anne (Alex Datcher) who tangles with a serial killer and a series of red herrings one spooky night on an isolated stretch of highway. Directed with trademark precision by Carpenter, “The Gas Station” makes a little go a very long way, garnering laughs and tension out of Carpenter’s icy electronic score, a memorable central location, and creepy turns from Craven and Carradine as a sketchy customer and a gas station jockey, respectively.

Fans of The Twilight Zone tended to tolerate, rather than treasure, the comic episodes of the venerable and deathless anthology series, which tended to be cutesy and whimsical rather than genuinely funny. Though Rod Serling and his co-conspirators regularly went for chuckles, humor simply wasn’t the show’s forte, but Body Bags fares well with “Hair,” which is exactly the kind of quirky comic fodder The Twilight Zone, in its myriad different incarnations, loved but so seldom pulled off. “Hair” succeeds primarily due to a wonderfully unhinged lead performance by the great Stacy Keach, who delivers a boldly unselfconscious turn as Richard, a pathetic boob pathologically obsessed with restoring his thinning hair. When comb-overs merely highlight the problem they’re meant to obscure, Richard takes dramatic action and signs on with a hair recovery company—in one of the many 1993 moments throughout the film, the company’s infomercial spoofs Sy Sperling and his Hair Club For Men—that promises a Fabio-like mane overnight, albeit with deadly and devastating side effects.

Tobe Hooper takes over the directorial reins for “Eye,” the third and weakest entry in the trilogy, an old-school shocker about Brent, an ambitious minor league baseball player (Mark Hamill) on the cusp of making it to the majors until a car accident costs him an eye. The doctors give him a replacement eye that seems to work wonders, but like all replacement body parts in the history of horror movies, this one previously belonged to a deranged murderer who wastes no time corrupting the pure soul of its new owner. “Eye” follows a predictable path as Brent devolves steadily from Godly family man to deranged killer, hitting all the expected notes with a dispiriting grimness far removed from the goofy good humor of “Hair” and Carpenter’s kitschy wraparound segments.

Oh well. For a horror anthology series like this, unevenness is to be expected, so two out of three solid segments isn’t bad. In the commentary for the television movie included on the Blu-ray/DVD, Carpenter says Showtime wanted to bring Body Bags back as a proper series, only on the cheap and shot in Canada. A Body Bags series might have been fun, but Carpenter and his colleagues seem to have made the right decision in passing on it. Even with the impressive talent assembled in front of and behind the camera, and a healthy budget for a television movie, Body Bags is still little more than an agreeable lark, and its breezy charm might not have survived a drastic cut in budget and shift in shooting locales.

Assault On Precinct 13 contains new interviews with art director Tommy Lee Wallace and actress Nancy Loomis, and a fun, informative Q&A with Carpenter and Austin Stoker. It also has a predictably entertaining audio commentary from Carpenter, one of the masters of the form. Body Bags also includes a chummy, entertaining commentary track where Carpenter and first Robert Carradine and then Stacy Keach reminisce aabout a production nobody involves seems to remember too vividly, in part because production of the film was sandwiched in between the making of Carpenter’s Memoirs Of An Invisible Man and In The Mouth Of Madness. Ever the cinephile, Carpenter pumps Carradine for anecdotes about making The Cowboys with John Wayne and discusses Shakespeare with the amiable Keach, who says he took the role in part to make peace with his own early descent into baldness and his mother’s contention that he’d never make it in the business without a full head of hair, or at least a simulacrum thereof. Hooper couldn’t record a commentary himself so for the final segment, producer Sandy King talks to author and Carpenter expert Justin Beahm about “Eye” in a segment that will be of interest primarily to Carpenter obsessives/completists. The special features make the most of this modest but enjoyable footnote to Carpenter’s remarkable career.