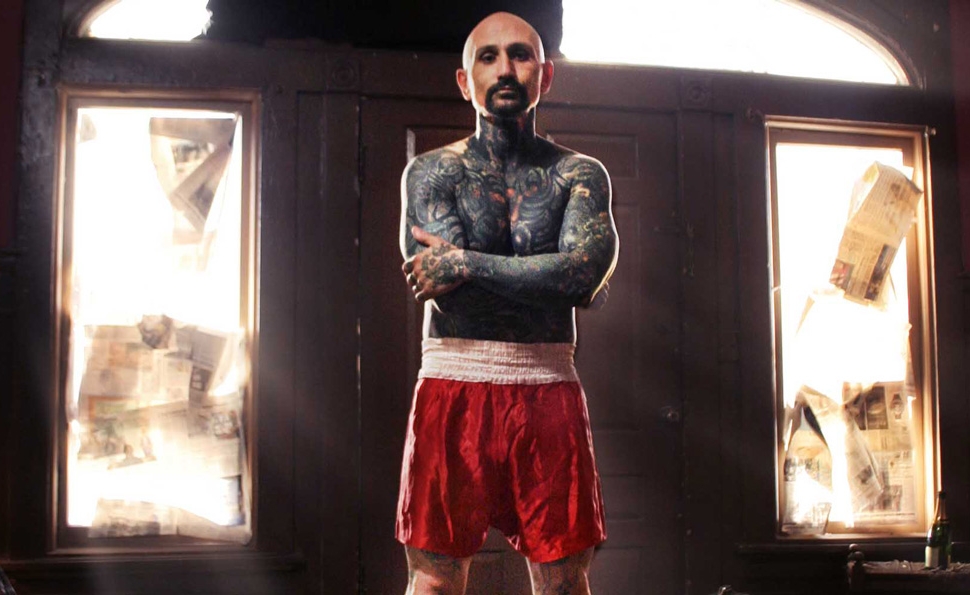 A third-rate throwback to the awful likes of Spun, Junkie revels in the self-destructive scuzziness of drug addiction without positing any compelling reason to care about either its protagonists or their insane circumstances. Set almost exclusively in a filthy, ramshackle house modeled after Ed Norton’s flophouse home in Fight Club, Adam Mason’s film commences with Danny (Daniel Louis Rivas) trying to go clean, but finding it difficult to resist his housemate Nicky (Robert LaSardo)—a bald, goateed, motormouthed psycho covered in tattoos—who keeps telling Danny to order up more narcotics. Giving in, Danny calls dealer Otto (Tomas Boykin), but things go awry when Danny accidentally calls Otto a Nazi, Otto tries to rape Danny at gunpoint, and Nicky saves Danny by killing Otto with a meat cleaver to the head.

All this initial madness is dramatized at a hysterical pitch in which rapid-fire blabbering and nails-on-blackboard screeching generate a mood of frazzled chaos. That’s amplified by the readily apparent fact that Nicky isn’t real, he’s a figment of Danny’s imagination. Or, more precisely, he’s a manifestation of Danny’s drug dependence, a revelation that furthers Junkie’s connection to Fight Club, and makes most of its ensuing action a tedious descent into gimmicky craziness. Having killed Otto, Nicky begins draining his blood because it provides a “primo deluxe” high, though that process is complicated by the arrival of Danny’s ex-girlfriend Sonja (Tess Panzer) and Danny’s dad (Andrew Howard), who shows up with a whorish new Vegas bride (Caroline Guivarch) in tow, and promptly begins asking for money and ridiculing his son with gleeful abandon.

Working from a script co-written with Simon Boyes, Mason shoots his material with a spasticity that mirrors Danny’s bonkers condition, but to no appreciable end. Junkie has nothing to say about addiction, except that it can lead to hallucinations about playing Russian roulette with a zombie drug dealer and Charles Manson (Ian Duncan)—nuggets of wisdom that are useless both to those with no interest in imbibing enormous amounts of narcotics, and those already firmly ensconced in a chemical haze. It’s apparent that the film aspires to comedy, considering its frenzied pace and endless wannabe-creative profanity. But there’s nothing funny about this closed-quarters scenario, just a depressing sense of being forced to spend time with people who don’t warrant any attention.

It doesn’t help matters that Rivas is a dull, whiny center of attention, or that Mason eventually resorts to shock tactics, culminating with a scene involving Nicky screwing Sonja on a floor mattress while Dad graphically pleasures himself (with his new bride’s help) in the corner. It’s all so much juvenile scandalous nonsense, made temporarily tolerable by the hyper lunacy of LaSardo—whose physical appearance alone is more unsettling than the plot’s various incidents—but ultimately turned unbearable by a finale awash in home-movie flashbacks that have the gall to steer the sensationalistic material into tender bathos.