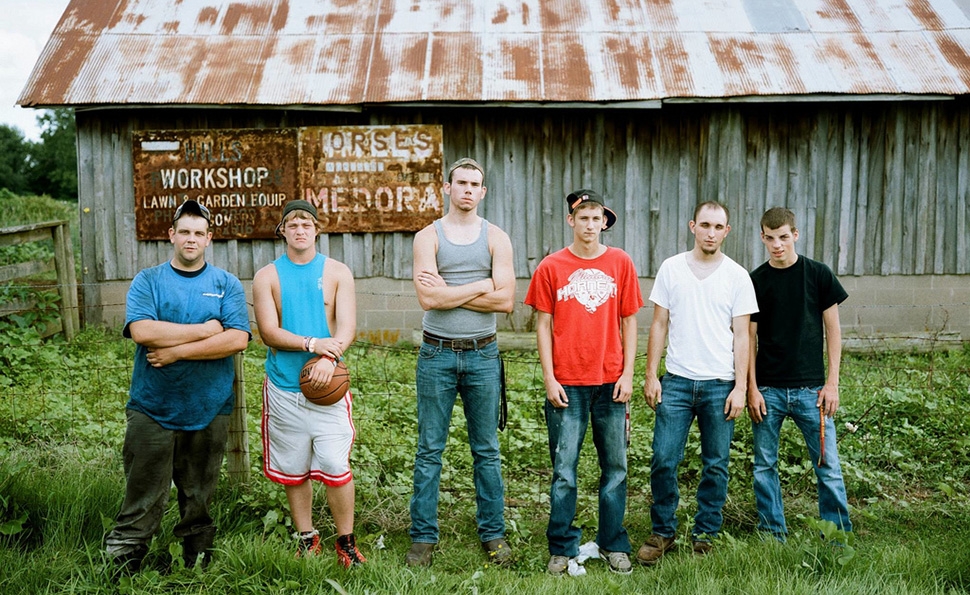 When factories shutter in small towns like Medora, Indiana, a rural burg in the southern part of the state, the population doesn’t necessarily leave, even though there are no good jobs left, and no possibility that they’re ever coming back. When the makers of the documentary Medora ask a convenience-store clerk to describe the town in one word, she replies, “Closed.” Some residents drive a great distance for work, while others are unemployed, but the overall impression is of a zombie town, with its 500 or so residents shuffling forward on a diminished sense of pride and community. Many of them have lived in Medora their entire lives, born to parents and grandparents who knew more prosperous times, when a thriving working class could clock in at the automotive-parts factory or a brick-making plant.

Now the only bricks produced in Medora are the ones tossed up by the high-school basketball team, which is entering the 2011 season on the state’s longest losing streak, carried over from 0-22 ignominy. Directors Andrew Cohn and Davy Rothbart—the latter a journalist who co-created Found magazine—have provided a great hook: In the basketball-crazy state of Indiana, the land of Hoosiers and Bobby Knight, what does the worst team look like? What’s the underdog among underdogs? And what they find in the Medora Hornets is a sad-but-scrappy avatar for the town itself, a group of troubled kids who carry a losing mentality around like Pig-Pen’s cloud of dirt. Even when they aren’t completely overmatched, the expectation of failure becomes a self-fulfilling prophecy.

Many of the Hornets’ problems are unique to their situation: While other small-town high schools have been folded into larger, consolidated schools, Medora has held out, despite devastating budget shortfalls, and it draws its basketball team from a pool of about 75 boys. Contrast that with the 350 to 400 boys eligible for the competing schools, and the disadvantage is immense, especially without one or two elite players to carry the team. There are holes in every position: a lumbering, undersized 6-foot-5 center, a backcourt that can’t break a full-court press, and jump-shooters who provide more clangs than the school’s underfunded music program. And every single player on the floor has more issues off the court than they do on it.

In Medora’s most affecting passages, Cohn and Rothbart tour the wreckage of the players’ private lives, characterized by broken homes, crippling poverty, drug and alcohol abuse, and dim prospects for higher education. (One player with learning disabilities talks about his hope of becoming the first in his family to graduate high school.) Among the most stable and centered of the group, Dylan, one of several children born to different fathers, has fervently embraced Jesus in lieu of a male role model. He’s never met his real father, who doesn’t live that far away; when the man brazenly sends him a “friend” request on Facebook, Dylan is torn over whether to accept it. Elsewhere, the team’s center may or may not finish the season, depending on whether his alcoholic mother can stay sober enough to keep him at home (and in school), and a hot-headed freshman haplessly tries to stay out of trouble to keep his spot in the lineup. And when the kids get together after hours, they drink with a lustiness that seems like the fulfillment of some grim future prophecy.

As in Hoop Dreams, troubles at home raise the stakes hugely on the court, though the dream here is far more modest: to slake their thirst for just one victory, and to know, for once, what winning feels like. Their pursuit of this elusive goal gives Medora a strong narrative through-line, but Cohn and Rothbart cling to it too fervently. One win isn’t a salve to Medora’s wounds any more than 22 losses defines its character, but the film leaves the strong impression of real life conforming to script, affirming some pre-cooked story about the resilience of small-town America. It’s a show of great empathy and hopefulness on Cohn and Rothbart’s part, embracing the possibility of the younger generation breaking from devastating cycles of poverty and addiction. But it’s also a formula finish for a story that’s still ongoing.