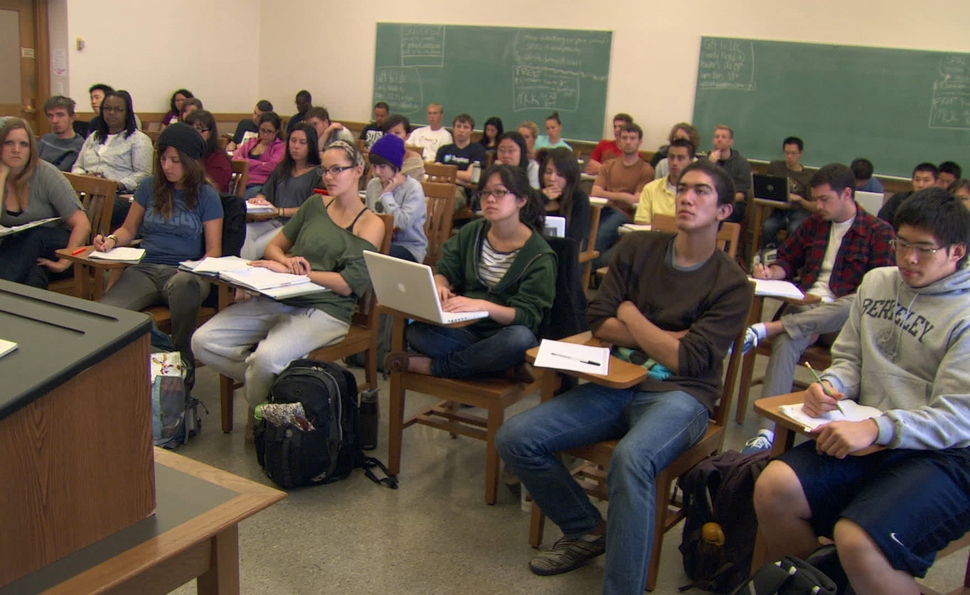 After 46 years of making documentaries, Frederick Wiseman has a pretty good handle on what he’s doing. His modus operandi is simple: 1) Choose a subject. Generally, it’ll be an institution of some kind—a hospital (Hospital), a welfare office (Welfare), a zoo (Zoo), a ballet company (Ballet), etc. 2) Hunker down with a camera, usually for weeks, if not months, always eschewing interviews, and shooting strictly cinéma vérité style. 3) Assemble the footage, minus narration or any other overt editorializing, in a way that’s nonetheless carefully crafted to form a thesis of some kind, however implicit. Not that Wiseman could circumvent the last step even if he wanted to, except by editing the film completely at random; to his credit, he’s never claimed objectivity for his work, freely admitting that he shapes his apparently uninflected material in a way that reflects his thinking.

At Berkeley, Wiseman’s latest effort, makes its case as subtly as ever, to the point where the film could conceivably function as a Rorschach test. Academia is by no means a new subject for the director—his second feature was called High School, and he even made a sequel decades later, High School II. But there’s a reason he didn’t simply call this one College or University. U.C. Berkeley has a long history as a hotbed of student activism, dating back to Mario Savio’s famous “bodies upon the gears” speech at Sproul Hall in 1964, and it’s also perhaps the most prestigious publicly funded university in America. Over the course of four sprawling hours, At Berkeley examines both what the school does (via sitting in on classes) and how it operates (via sitting in on meetings), slowly building to a low-key confrontation over tuition hikes between students and the administration, at the time led by chancellor Robert J. Birgeneau, who has since retired.

There’s an imbalance at play here: Few audience members will have attended, say, a university budget meeting, but a lot of them will have attended a university. Consequently, the many scenes that do little more than observe a class in progress for up to 10 minutes at a time can be wearisome. In particular, those that focus on a professor giving a lecture to a sizable, impassive audience (as opposed to those involving class discussion, which is more lively) make At Berkeley feel a bit like TED Talks: The Movie. Wiseman is much more at home in Berkeley’s administrative offices, where Birgeneau and his colleagues candidly discuss everything from shaping the diversity of the student body to how frequently the campus lawns get mowed. Wiseman’s documentaries, at their best, have always been frank depictions of how the sausage gets made (quite literally, in 1976’s Meat), and there’s a real fascination in watching the gears of this massive machine grind.

Once the student protest comes to dominate the film’s second half, however, things get dicier. As usual, Wiseman never overtly takes sides, and the fact that he’s simply documenting what happened gives him plausible deniability. All the same, At Berkeley has been shaped in a way that makes the protesters come across as clueless, entitled wannabes who lack the genuine political convictions of their 1960s forebears. That may well be accurate, but it’s hard to feel confident about it, given the disparity between time spent with the students, about whose demands Wiseman reveals almost nothing (except that Birgeneau finds them incoherent), and time spent with the suits, some of whom even get to discuss their own radical pasts. Later, when the dispute has been resolved (at least temporarily), a group of kids talk in class about how useless they consider their fellow students’ actions to have been. Because this is all still mixed in with tours of robotics workshops and veterans’ support groups and other scenes of campus life, it doesn’t come across as didactic, but Wiseman’s sympathies seem clear, and unexpectedly grumpy. In effect, he’s chastising the kids for not yet having seen At Berkeley, and its portrait of academic realpolitik. Not quite fair.