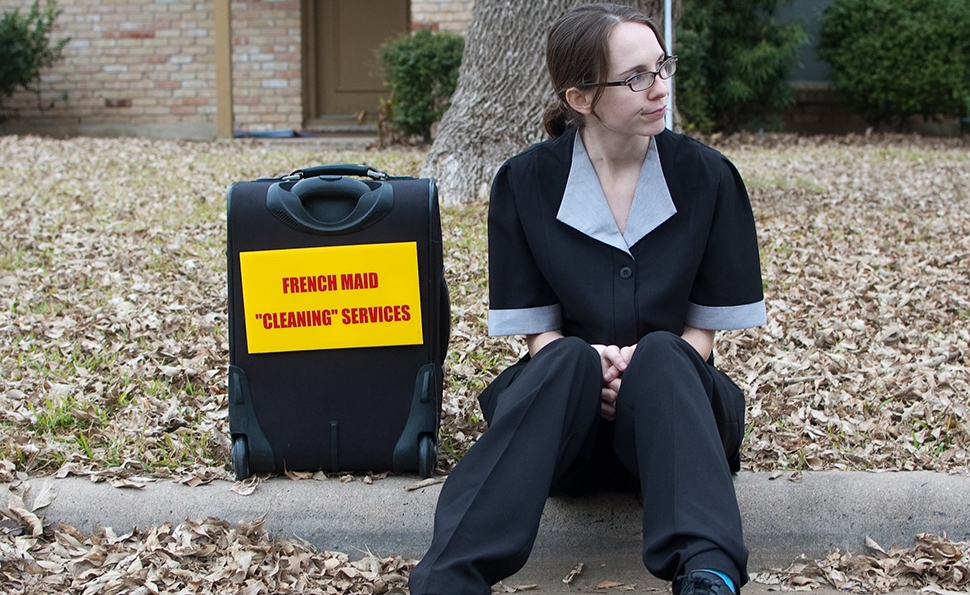 A cinematic doodle whose lack of ambition is both its most charming characteristic and its most limiting one, Pictures Of Superheroes operates in an absurdist universe where everything is abstracted in the silliest ways possible. Don Swaynos’ film opens with Marie (Kerri Lendo) being fired from her housecleaning job, after learning from her boss Gil (Chris Doubek) that part of the reason for her dismissal is that the business is actually a front for prostitution (a “hump clinic,” according to Gil), so her not having sex with clients made her “not one of our better employees.” Her boyfriend Phil (Byron Brown) sees this development as positive, because Marie can now spend more time grocery-shopping, reading, and scheduling her days—including having dinner with him the following night, when he lets her know he’s breaking up with her.

Jobless, penniless, and alone, Marie finds a new path when, on the street, she’s confronted by bald-headed Eric (Shannon McCormick), who immediately gives her a gig cleaning his house. Eric can’t do it himself because he’s way too busy running a company that he can’t and/or won’t explain—a vagueness that’s part of the humor peddled by Pictures Of Superheroes. Things become even more baffling when it turns out Eric’s place is a sty because of Joe (John Merriman), a bearded slob who pours soda on Eric’s rug for no reason. Eric doesn’t even realize Joe lives with him (or is his longtime friend), though they’re often in close proximity. Unlike workaholic weirdo Eric, Joe is a layabout slob who tells his restaurant boss that he no longer comes to work because he doesn’t like doing stuff that’s not fun, so instead, he chooses to either do stuff that is fun, or to do “no stuff at all.”

Eric and Joe are polar-opposite caricatures of masculinity, the former a careerist lunatic without time for grocery shopping or dating—so he hires Marie to pose as his wife at business functions—and the latter a knuckleheaded man-child who eats candy for breakfast and believes growing up involves re-enlisting in boarding school at age 35. That’s just about the only real thread running through Pictures Of Superheroes, however, and it’s as loosely conceived as the rest of the material, which takes great pleasure in reducing things to their ludicrously abstract basics. For example, there’s a scene where Eric scribbles lines all over a dry-erase board during a meeting, then concludes by asking if his potential partners want to “do the thing where we write our names on a bunch of stuff.”

Pictures Of Superheroes never generates any sort of comedic momentum, but it nonetheless features a reasonable amount of amiable absurdity, all of it revolving around the deadpan confusion and go-with-it resignation of Marie, whose dark glasses and perpetually slumped shoulders make her resemble an older, more beaten-down version of MTV cartoon teen Daria. It’s a film that plays like a lark, acted out by a cast of performers who all seem to exist in their own personal nonsensical bubbles.