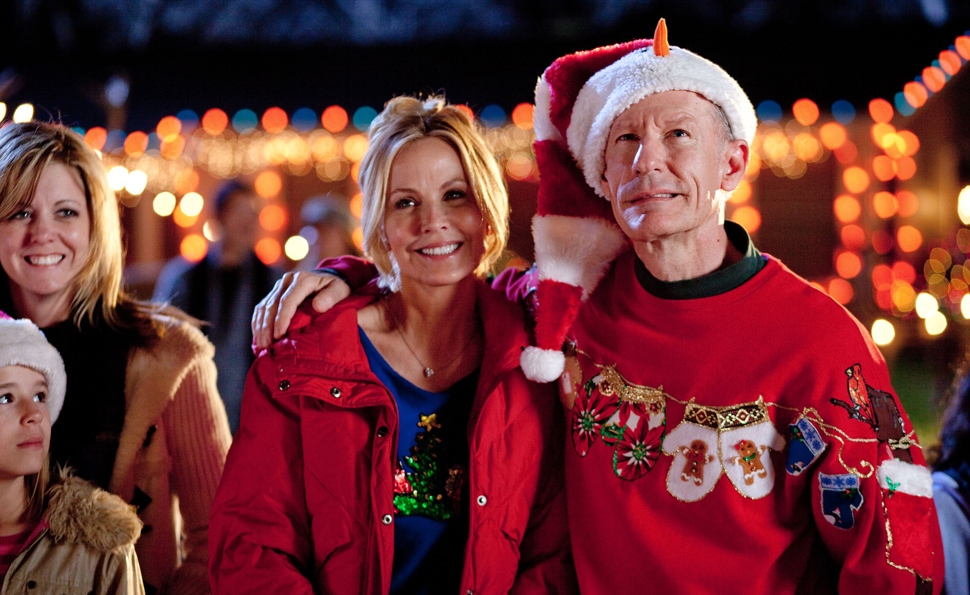 There’s a reason why most people trot out the same holiday films every December. Some of it has to do with tradition, the seasonal tug that makes it necessary to see Jimmy Stewart go on a jolly tear through the streets of Bedford Falls, or Peter Billingsley rip the wrapping paper off a Red Ryder carbine-action 200-shot Range model air rifle. But some of it also comes down to a simple fact: most contemporary Christmas movies aren’t very good. Too often, they’re either crass comedies that exploit consumers just as much as the yuletide commercialism they supposedly decry, or they’re forgettably sappy Lifetime-esque features pulled from the back of the Hallmark cinema vault.

It’s natural, then, to approach a movie like Angels Sing—which announces itself as the family-friendly story of a man (Harry Connick Jr.) attempting to find the Christmas joy he lost—with a certain amount of trepidation. Indeed, Angels Sing is a heartfelt but less-than-polished piece of work that isn’t for everyone, particularly those who can’t suspend the disbelief required to accept preposterous plot developments, or the sight of Lyle Lovett wearing a variety of snowman sweatshirts. But graded on a Christmas-movie curve, it actually isn’t bad, for a few key reasons. It doesn’t feel like it was rolled off a Hollywood assembly line. It’s clearly an indie effort made by people with actual souls. It was shot in Austin, Texas, and has a real Austin sensibility about it, from the musicians sprinkled throughout its cast to the shots of sizzling barbecued meat at The Salt Lick restaurant. Plus, it features Willie Nelson singing “Silent Night” and “Amazing Grace.” Moments like that can renew the spirit, and—at least a teensy bit—redeem a modest little Christmas movie that teeters toward the predictably sentimental.

Director Tim McCanlies and screenwriter Lou Berney, who adapted the script from the novel by Turk Pipkin, purposely borrow elements from beloved holiday films and bend them to create their own version. Angels Sing asks: what would have happened to a Texas version of George Bailey if he hadn’t saved his brother from falling through the ice in It’s A Wonderful Life? What must it feel like to actually live in the dream house Kris Kringle gives to a young Natalie Wood in Miracle On 34th Street? What if Clark Griswold wrapped his house in a zillion twinkling lights, à la National Lampoon’s Christmas Vacation, and didn’t cause a city-wide power failure?

Hence, Connick Jr. plays University of Texas professor Michael Walker, who has rejected all seasonal cheer because he’s still consumed with guilt over watching his brother die on a long-ago Christmas Day, after falling through the ice of a precariously frozen pond. When Michael’s family—including wife Susan (Connie Britton, sharing the name of Wood’s Miracle On 34th Street character) and son David (Chandler Canterbury)—is suddenly forced to move out of their rental property, they stumble upon a stunning, renovated home that a man named Nick (Nelson) sells to them for half of its worth, and without any real-estate agents or mortgage-loan companies involved. (Remember: disbelief really needs to be suspended.) Then it turns out that the house happens to be located on the Live Oak Lane “Trail Of Lights,” a street where the neighbors demand that Michael unleash his bottled-up holiday cheer in order to fit in with the seizure-inducing light displays, incessant door-to-door carolers, and nativity scenes (complete with live camels!) that dominate their corner of suburban Austin. It’s a holiday movie created from recycled parts, and it doesn’t take a sign from Clarence the guardian angel to figure out where it’s headed.

Yet just when Angels Sing starts to sag from the weight of all that familiar Christmas-cookie sugar, it delivers something truly lovely, like Kris Kristofferson’s authentically warm performance as Michael’s father, or the sweet acoustic duet of “Christmastime Is Here” performed by Kat Edmonson and Lyle Lovett, or the heartbreaker of a reaction shot from Britton when the family receives some surprising sad news. (Fans of NBC’s Friday Night Lights will particularly enjoy seeing Britton back in Texas-mama mode, especially when they realize her sister-in-law is played by Dana Wheeler-Nicholson, who played Tyra Collette’s mother on the series.)

It’s possible this is all a bit too charitable toward Angels Sing. But the holidays are about charity and generosity. They’re also about watching Christmas movies. And for people who love their eggnog spiked with the tears brought on by watching overly sentimental holiday fare, Angels Sing might be exactly the kind of twangy treacle they need.