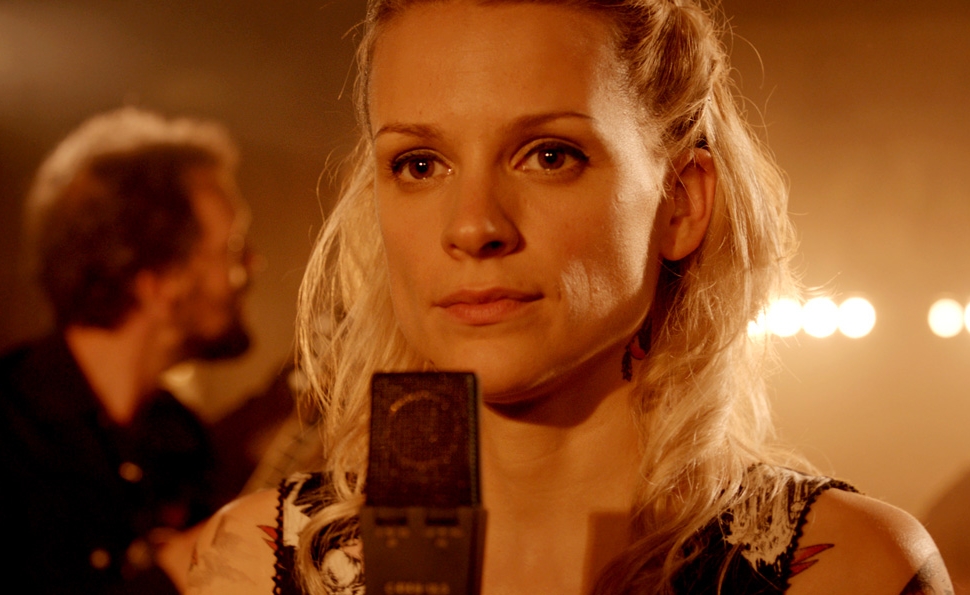 Sometimes a shot early in a film doubles as a signpost, announcing what kind of movie it is, and where it will go. The Broken Circle Breakdown, Belgium’s submission for Academy Award consideration this year, contains one such shot—a young girl’s arm as she receives an injection in a hospital—that seems to reveal the path ahead. But while it isn’t entirely inaccurate, it’s a blurry signpost in a movie that knows exactly where it’s going, but doesn’t want to share the destination too soon. The movie is a heartbreaker, but not the sort of heartbreaker the image suggests. Or at least not just that.

The film began as the play The Broken Circle Breakdown Featuring The Cover-Ups Of Alabama, written and originally performed by Johan Heldenbergh and Mieke Dobbels. Here, Heldenbergh reprises his role as Didier, half its central couple alongside Elise (Veerle Baetens). After an opening musical number, director Felix Van Groeningen first shows them caring for their daughter Maybelle (Nell Cattrysse) in 2006, when they learn she needs chemotherapy. From there, the film takes its first narrative leap, flashing back to 1999. Didier lives alone in a caravan outside Ghent, near a beautiful farmhouse that’s fallen into disrepair. He’s a former punk who’s fallen in love with country music, as former punks did for a while in the ’90s, but he’s fallen just as hard for Elise, a tattoo artist with delicate features and a body that doubles as an advertisement for her craft.

From there, the film flits across the timeline of their relationship, showing their marriage, their united front as they support Maybelle during chemo, their initial apprehensiveness at learning they’ll be parents, and later, their fracturing lives at the other end of Maybelle’s illness. Van Groeningen brings a graceful touch to the editing, letting one moment comment on another without overdoing the connections. At its best, The Broken Circle Breakdown has the feel of life as it’s remembered—moments out of time tethered together by the feelings of those living them.

The performances capture that feeling, too. Heldenbergh and Baetens play Didier and Elise’s story as that of lives meshing together, initially thanks to Didier’s infectious enthusiasm for music and Elise’s infectious enthusiasm for life itself, and then through their love for their daughter. Underscoring it all: the music, an alternately rollicking and heartbreaking selection of bluegrass songs performed by Heldenbergh, Baetens, and the actor/musicians playing the members of their band, which finds a growing following as the film’s timeline progresses.

The film expertly weaves all those disparate elements together until, unfortunately, it seems to forget how. Grief flattens the characters. Didier becomes increasingly defined by his atheism, and Elise by her desire to believe. The back half of the film becomes dominated by heated exchanges that feel more written than lived, and moments that only underscore how many themes the film suggests without fully engaging. Beyond that conflict between belief and reason, The Broken Circle Breakdown touches on what it means for Europeans infatuated with American culture to live through the last decade, and for a man with no faith to sing songs of devotion.

Still, though it’s filled with missed opportunities, it isn’t defined by them. Van Groeningen brings a filmmaker’s eye to material that began onstage, making scenes set in the sun-drenched Flemish countryside and in cramped interiors feel equally cinematic. The cast matches his work, with Baetens and Heldenbergh creating a shared sense of history that elevates even some awkward later scenes, and everyone’s efforts feeding into an atmosphere of heightened emotion that starts with the film’s first scene and never really recedes, as Van Groeningen rides the crests and troughs of a love that may not survive the battering life hands it. Like one of the songs its characters perform, The Broken Circle Breakdown recycles some familiar material—young lovers, sick kid—but earns its heartbreak honestly.