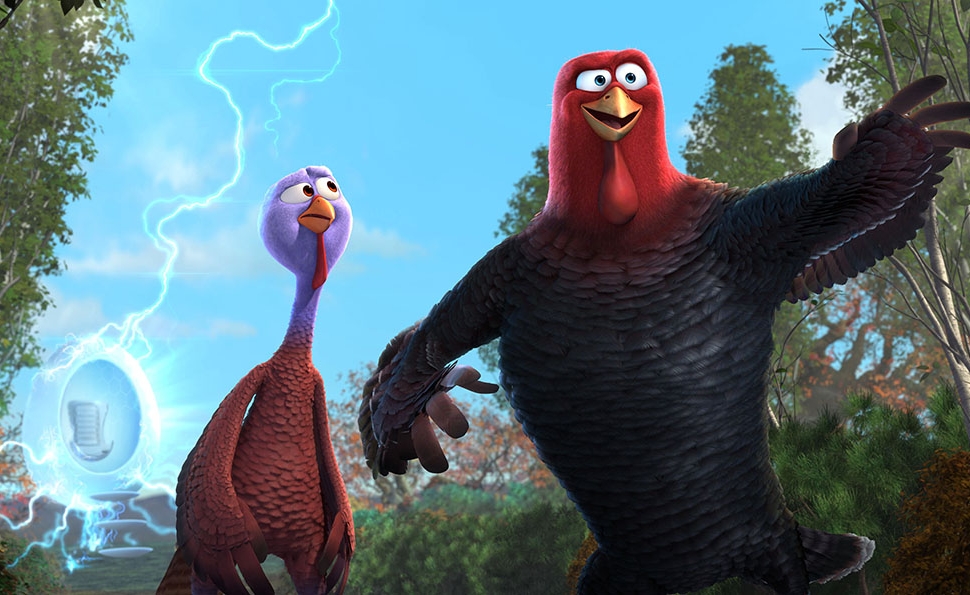 The animated comedy Free Birds is about turkeys who do not want to be eaten. It’s basically Chicken Run, but with turkeys. And a time machine. And the president of the United States. And the Plymouth colony. It’s also another in a disposable line of bright, busy computer-animated adventures in which recognizable Hollywood voices toss around riffs that sound like the work of bored-to-suicidal comedy writers gathered for an afternoon brainstorming session. More than anything, though, Free Birds feels like Hollywood brining small children for the blockbusters they’ll pay to see when they’re older. It’s littered with quips, but the film puts a premium on loud, effects-driven action that mistakes nonstop intensity for cartoony entertainment. Without the anthropomorphic turkeys, there’s no substantial tonal difference between Free Birds and another G.I. Joe sequel.

With that melancholic lilt in his voice, Owen Wilson adds an unintended layer of pathos to Reggie, a scrawny turkey who refuses to fatten himself up for the slaughter like his corn-pecking conformist chums. As Thanksgiving approaches, Reggie tries to warn the other turkeys, but he gets a stay of execution himself when the president chooses him for the ceremonial pardoning, and lets his daughter keep Reggie as a pet at Camp David. Reggie enjoys the sweet life of pizza and telenovelas until Jake (Woody Harrelson), the leader of the Turkeys’ Liberation Front, kidnaps/recruits him for a dangerous mission. Using a time machine in a government lab—via a high-tech secret barnyard passageway, the genesis of which would make a far more entertaining movie than Free Birds—Reggie and Jake travel back to the first Thanksgiving with the intention of stopping it. That means banding together with early 17th-century turkeys, including plucky love interest Jenny (Amy Poehler), to elude the pilgrims hunting them with savage dogs and heavy artillery.

Free Birds takes a surprisingly grim view of the settlers, remarkably close to the starving, venal, “civilized” aggressors walled up in a muddy fortress in Terrence Malick’s The New World. But it’s probably necessary to set up the Roadrunner/Wile E. Coyote dynamic between the hunters, with their Acme-style traps and powder kegs, and the turkeys who “meep-meep” (or “gobble-gobble,” anyway) their way around them at every turn. This should be a good time—similar movies like Chicken Run and Fantastic Mr. Fox proved as much—but the action scenes are curiously focused on turkeys in peril rather than playing their great escapes for laughs. Add to that the distraction of a time-traveling, talking space egg named S.T.E.V.E. (George Takei), and the film has trouble finding a beat that doesn’t just add to the noise.

What laughs do trickle out from Free Birds come mainly from Harrelson’s unabashed gung-ho spirit, but even then, the filmmakers overplay his machismo by half; there are at least two or three jokes devoted to Jake flexing his butt muscles. Giving a brilliant comedian and improviser like Poehler nothing to do is the bigger crime, though, as if she was asked to play Leslie Knope strictly at her most earnest and competent. In the end, they all have to yield to the relentless, enervating action sequences that take over the second half, when humans and turkeys escalate a battle to Braveheart proportions (to name one of the movies referenced). It’s as bruising an experience as, well, the average American Thanksgiving.