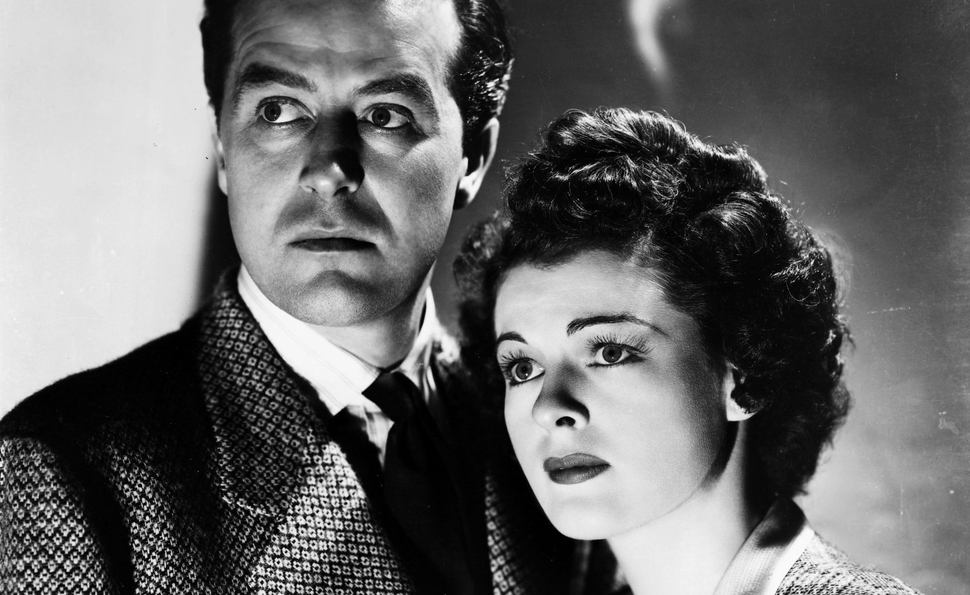 The Uninvited, a hit supernatural mystery film from 1944, never gets around to explaining its title. Sure, it has a pair of obvious candidates in the form of the two ghosts that haunt Windward House, a stunning Victorian home perched cliffside on one of Cornwall’s more forbidding, yet gorgeous, stretches of coast. (Actually Northern California, but cinematographer Charles Lang, who earned an Oscar nomination for his work here, makes the cliffs look almost otherworldly in the film’s opening shots.) But the title could almost as easily be hung on the film’s heroes, Roderick and Pamela Fitzgerald, a brother-and-sister team (played by Ray Milland and Ruth Hussey, respectively) who fall in love with the house and decide to buy it and bid London goodbye. They’re surprised when its owner, the aging Commander Beech (Donald Crisp), who lives nearby with his 20-year-old granddaughter Stella (Gail Russell), accepts an absurdly low offer. But even before the nearby Dr. Scott (Alan Napier) states he’s considered a newcomer because he’s only lived there a decade or so, they realize they’ll forever be outsiders both to Cornwall and in their own home, a house filled with stories that refuse to end. They can stay in the house, but no one asked them to come.

The past remains an uninvited visitor in the film, too. Then a fresh-faced young performer plucked from obscurity, Russell invests Stella with a sense of innocence. But she’s continually drawn to Windward House, and she tells Pamela and Roderick, who quickly takes a romantic interest in her, about her memories of living in the house as a toddler. She has stories about her artist father, his Spanish lover, and the mother that lover might have sent over the cliff one night—a cliff Stella is drawn to by unseen forces that almost seem to be pushing her to take the leap herself. She isn’t alone in sensing odd presences, either. Family pets either run away or refuse to climb Windward’s stairs, flowers wither inexplicably, a sun-drenched room refuses to get warm, and then there’s that strange sobbing that fills the night.

The Uninvited was, as director Michael Almereyda notes on one of this disc’s bonus features, one of the first films to treat the supernatural seriously, and to play ghosts and hauntings as something other than fodder for comedy. Though it’s the feature debut of director Lewis Allen—at the time, a Broadway veteran headed for a long career in film and television—it’s shot with confidence, skill, and a rare feel for atmosphere. The plot takes on one convolution after another, eventually bringing in Cornelia Otis Skinner as a nurse turned quack mental-health expert fixated on Stella’s mother. But the film smartly puts the emphasis on other elements, and the odd ways they might be combined.

Fancying themselves modern sophisticates despite the warnings of their superstitious Irish housekeeper (Barbara Everest), Roderick and Pamela remain unfailingly, inappropriately chipper, standing in contrast to Windward House’s air of dread until even they have to take the quaint stories of ghosts and dark doings seriously. Allen brings particularly sharp direction to the film’s setpieces (including a seance conducted using an improvised Ouija-like setup), and to subtler moments of the supernatural nudging its way back into life on earth. In one, Roderick, a composer, plays a song he’s written for Stella, one that takes on sad, ominous undertones for reasons he can’t explain. Later, the Victor Young composition “Stella By Starlight” became a jazz and vocal standard performed by everyone from Miles Davis to Ray Charles, while the film’s influence can be seen in virtually every haunted-house movie that came after it. Some things make a deep impression, then refuse to fade away.

The booklet includes a fine essay from Self-Styled Siren’s Farran Smith Nehme, and a late-in-life interview with Allen, who seems pleased that the film has become a classic. The disc itself also has a pair of radio adaptations, both starring Milland, and a remarkable visual essay from Almereyda that contextualizes the film within the history of the supernatural and within the careers of Milland and the tragic Russell. It teases out how this ghost story illustrates the supernatural qualities of all movies, which capture the past, but keep it at an untouchable distance.