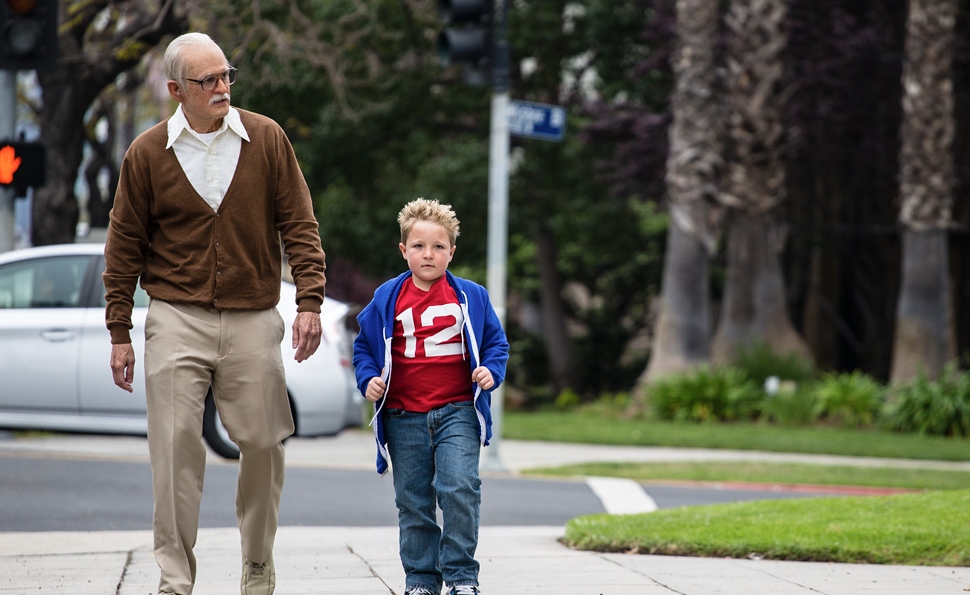 Johnny Knoxville gets top billing in Jackass Presents: Bad Grandpa, but the film’s real stars are its anonymous supporting characters, the innocent bystanders Knoxville encounters, horrifies, and harasses. Almost everyone onscreen in the film except Knoxville and young Jackson Nicoll—who play 86-year-old degenerate horndog Irving Zisman and his 8-year-old grandson Billy, respectively—are totally unaware they are being filmed. A fleet of hidden cameras follow Knoxville and Nicoll as they prank their way through the American South, capturing humanity at its most gloriously unguarded. For all Knoxville’s flatulent antics, many of the film’s biggest laughs—not to mention its most interesting moments—happen at the edges of its frame, where people react honestly and hilariously with shock, bemusement, and disgust to the madness he’s committing in front of them. Bad Grandpa is less a feature than a filmed investigation into the effect of dick jokes on the human psyche, like a Milgram experiment where the shocks are real, and Milgram himself is receiving them.

The original Jackass formula, as developed by Knoxville, director Jeff Tremaine, and producer Spike Jonze, blended skate-video-style stunts with extreme gross-out humor, outrageous tests of physical endurance, and high-concept pranks. As Knoxville became a celebrity, it became tougher to snooker people, necessitating innovations like the Zisman character, an ill-mannered miscreant played beneath a mountain of anonymity-granting latex makeup. In Jackass Number Two, Knoxville played Zisman in a skit called “Bad Grandpa,” where he poorly parented a foul-mouthed kid. Jackass Presents essentially expands that bit into a full feature, with a screenplay by Knoxville, Tremaine, and Jonze that’s significantly buoyed by extensive improvisation and the endlessly watchable reactions of their hapless victims.

There’s a plot, a first for a Jackass movie, but only in the way that pornography has a plot: as a perfunctory excuse to connect all the money shots. The Zisman clan is thrown into turmoil when Billy’s mother is sent to prison at the same time Irving’s wife passes away. Reluctantly, Irving agrees to drive Billy to live with his father, necessitating a cross-country road trip that offers endless opportunities for this odd couple to get into trouble.

It’s clear Tremaine didn’t dwell on the story. One scene ends with a convenience-store owner calling the cops on Zisman, and the next begins with him and Billy back on the road as if nothing happened. When Tremaine does finally pay attention to the characters’ emotional arcs, Bad Grandpa grows tediously sentimental in a way that’s ill-suited to Jackass’ subversive aesthetic; scenes of Knoxville choking up as he describes his feelings for Billy are almost as laughable as the ones where he gets a particularly sensitive part of his anatomy stuck in a vending machine.

As with the earlier Jackass movies, not all the gags are winners, but the pace is so relentless that it’s never long between memorable sequences. While longtime fans will definitely miss the rest of the series’ old cast, it’s hard to deny that Bad Grandpa contains several highlights that match anything the franchise has ever produced. An extended sequence where Zisman “accidentally” wanders into a male strip club, hits on the customers, provokes the dancers, and ultimately starts stripping himself is both a mesmerizing high-wire act of confrontational comedy and a fascinating Petri dish of human behavior.

Knoxville may never have found the right home for his gifts in traditional fiction films, but he remains an underrated physical comedian and improviser, with an admirable willingness to sacrifice his health for the audience’s amusement. Still, Bad Grandpa wouldn’t work if Nicoll was just a cutesy moppet prop. The boy matches his more experienced co-star with perfect comedic timing and an unshakeable naturalism in outrageous circumstances, as when he dresses in drag to infiltrate a children’s beauty pageant. Flat out, the kid’s a star.

Hidden-camera gags are hardly new, but Jackass adds an element of palpable danger to the formula. Knoxville’s fearlessness gives Bad Grandpa an undercurrent of risk that feels as authentic as his victims’ responses to the stunts. Though the plot is predictable, individual scenes (and individual targets) are anything but. In the film’s best moments, it’s more than funny; it’s exciting, and almost as daring as its indomitable lead actor.