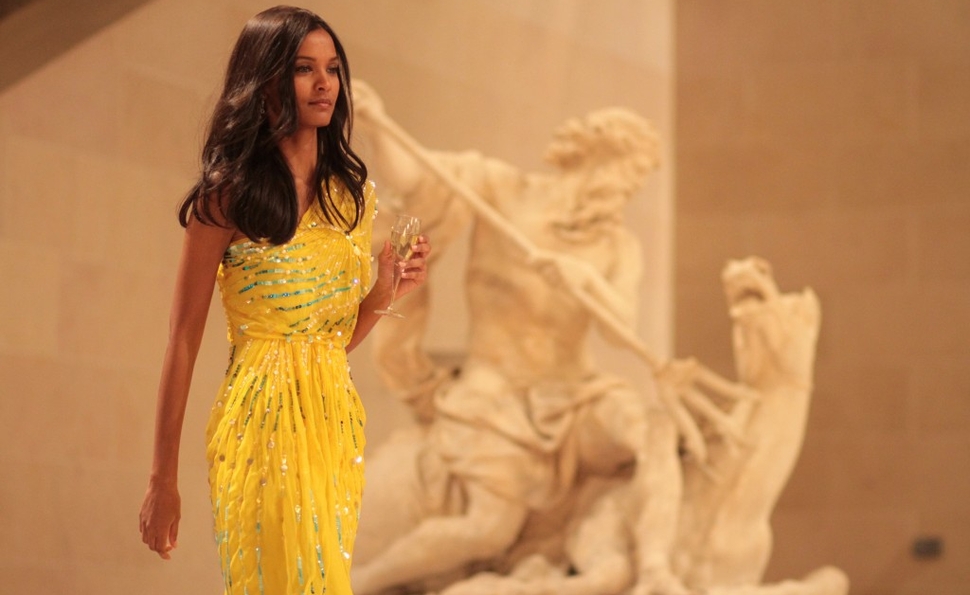 Capital is a despairing corporate thriller that rails against 1) banks in the claws of predatory stockholders; 2) the dictatorship of the markets; 3) speculation; 4) the rating agencies that run the economy for politicos, which threaten society; and 5) Democratic states that can no longer govern or get rid of banks who stifle them. Coming up with that précis was easy—apart from the numbers and a final “and,” it’s a line of dialogue from the movie, literally word-for-word, starting with “banks.” Director and co-writer Costa-Gavras, whose political bona fides stretch all the way back to 1969’s Best Picture nominee Z, isn’t beating around the bush here, and while the film is persuasive and detailed in its depiction of financial corruption, it’s also essentially a two-hour lecture, dry and academic. There are no guns here, only a bunch of wealthy men taking grotesque pride in their strategies to rob the poor and give to the rich, i.e. themselves.

Capital’s smartest move is eschewing the usual young, naïve idealist who’s gradually disillusioned by exposure to the industry’s dark side, à la Charlie Sheen in Wall Street. When the CEO of Phenix Bank is incapacitated by testicular cancer (symbolism!), he places Marc Tourneuil (Gad Elmaleh), an underling who’s generally perceived as compliant and ineffectual, in the driver’s seat as a temporary measure. Marc, however, has much grander ambitions, and immediately begins consolidating his power, which involves both appeasing and defying a group of American stockholders led by a shouty guy with the very American-sounding name Dittmar Rigule (Gabriel Byrne). It also involves firing thousands of middle-class employees around the world in order to boost the company’s stock, among other unsavory business decisions—all of which Marc sets in motion without any apparent pangs of conscience, despite his wife (Natacha Régnier), who protests that they have enough money already, and an analyst (Céline Sallette) who urges Marc to resign and expose Phenix’s illegal dealings regarding a Japanese bank purchased in a hostile takeover.

Apart from a few scattered, ineffective moments in which Marc speaks directly to the camera or fantasizes about insulting and punching rivals, Capital remains doggedly realistic; the film was adapted from a novel written pseudonymously by a former high-level banker, and it has the unmistakable tenor of an exposé. But while Costa-Gavras’ refusal to dumb down the material is theoretically admirable, it makes for an exceedingly low-octane thriller, especially when coupled with such a singleminded, unconflicted protagonist. Elmaleh, a Moroccan actor best known for playing the title role in The Valet, keeps Marc on an almost sociopathically even keel throughout, which is likewise both impressive and faintly dull. (Byrne, by contrast, hams it up shamelessly as Dittmar, as if attempting to singlehandedly inject some tacky life into the picture.) Marc’s only weakness is his propensity to be jerked around by a cockteasing supermodel (Liya Kebede), and even that subplot ultimately sees him take control in spectacularly ugly fashion. For those completely ignorant of how the global economy works, Capital might be an eye-opener; for anyone else, it’s as revelatory as a portrait of a self-interested politician. You don’t say.