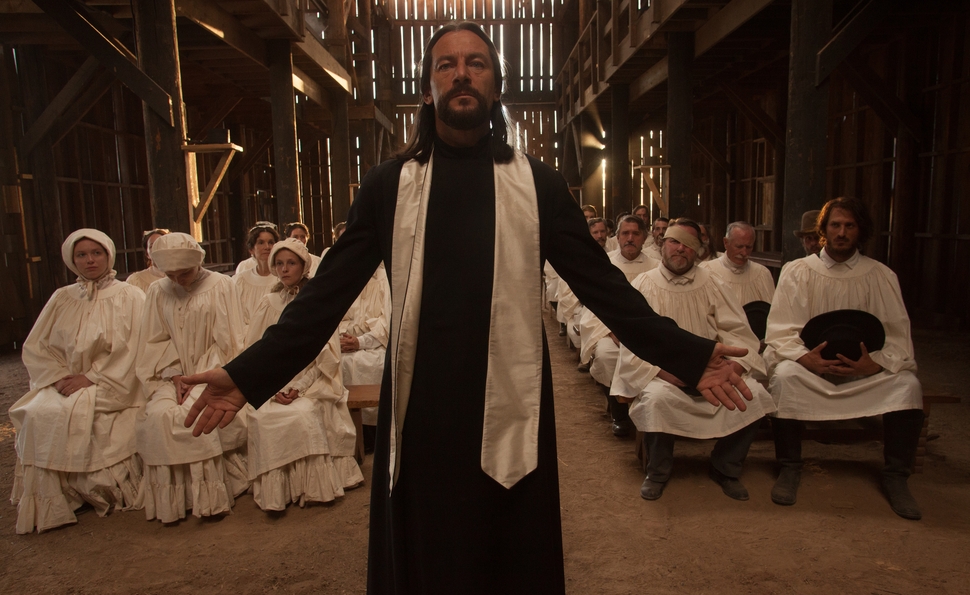 The Wild West has long been the dominion of ruthless men off- and onscreen, but the rootin’-tootin’ cowgirl has stealthily staked her own claim in frontier lore, whether via the 1953 Doris Day musical Calamity Jane or 1994’s little-remembered Bad Girls. The Coens’ acclaimed 2010 True Grit adaptation seems to have encouraged the trend, with 2011’s Meek’s Cutoff and 2013’s underseen Dead Man’s Burden following in its footsteps. Sweetwater ostensibly falls into this tradition, but its revenge-minded plot and comically violent sensibilities hardly make it equal to its predecessors.

The elements haven’t been kind to New Mexico farmers Sarah and Miguel Ramirez (January Jones and Eduardo Noriega), and worse yet are their neighbors, namely God-fearing prophet Josiah (Jason Isaacs), whose sheep—his literal flock—have been as damaging to the Ramirez crops as anything else. A rapey, racist, town-ruling type, Josiah doesn’t take kindly to Miguel’s civil plea for a fence, and soon kills him off, just like he murdered a pair of trespassing twins (director Logan Miller and his twin brother and co-writer, Noah Miller). That earlier crime has already drawn the attention of Santa Fe lawman Cornelius Jackson (Ed Harris), and he and Sarah are out for justice.

Working from a story by Andrew McKenzie, the Miller brothers’ second film (after 2008’s Touching Home) benefits from the inherent production value of dusty Southwestern vistas (many a character is shown riding horseback in silhouette) and no shortage of era-appropriate trappings. The setting lends little overall grandeur to the story, but the desolation of the Ramirez farm, the dominance of Josiah’s church (the road to which is lined with oversized crosses), and the general seediness of the local town are all credibly established in the moment. Similarly, Miller’s direction demonstrates minimal flair in capturing characters and conflicts, with shots frequently framed more in service of conversation than action. Those conversations are themselves mostly in service of creatively crass dialogue. (One character is told, “go scrub your ass with a cactus brush!”)

And what a mouthy lot they are. Though the supporting ranks are rounded out nicely enough by Noriega, Stephen Root (as a ruthless banker), and Amy Madigan (as Sarah’s literal whore of a mother), they often take a back seat to Isaacs and Harris’ equally eccentric antics. The former’s clipped delivery and wide-eyed demeanor reflects a theatricality well-suited to a preacher-man, although this doesn’t necessarily translate to Josiah’s more menacing moments. As Isaacs chews the scenery, though, Harris aims to knock it right down. First shown reciting poetry to an empty canyon at daybreak before putting a whipping on a local sheriff so fierce that he wields a mounted deer head as a weapon, the reliably stoic Harris is in rare, long-haired smartass form, as he molests every corpse he comes across with a consistent zeal, and allows Josiah to squirm before a mountain of damning evidence.

That leaves Jones, who is alone in downplaying her character’s righteous fury. If nothing else, it’s a more admirably flinty performance than most she’s given of late. She brings a plain resolve to the role of a former prostitute who knows how to care for herself, exhibiting the barest emotional turmoil beneath her single-minded determination. Whether she’s dispatching a peeping tom with a pistol up his posterior while clad in a loud purple dress, or disarming a pair of lurking henchmen with nothing but her birthday suit, Sarah’s would-be parade of vengeance makes for a bloody but bland reckoning in the wake of so much shouting. Rare is the Western that’s too low-rent to be satisfyingly lurid, but with hardly any tension or personality to its name, Sweetwater just misses the mark.