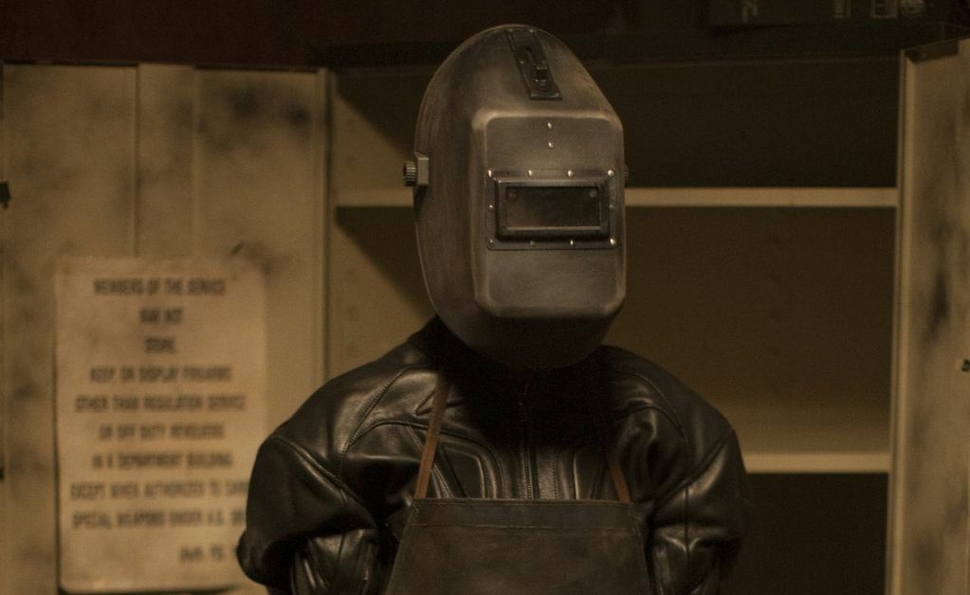 Evidence utilizes the found-footage gimmick in laughable wannabe-meta fashion, telling a horror-mystery via various recordings discovered at an abandoned Nevada truck stop, where a group of strangers are found murdered after a shuttle-bus breakdown. As with his prior The Fourth Kind, director Olatunde Osunsanmi exhibits an interest in playing with the boundaries between “real” and fictional, this time through videos made by a group of Vegas-bound ciphers that includes a documentary director Rachel (Caitlin Stasey) and her BFF, an aspiring starlet named Leann (Torrey DeVitto).

Holed up in the type of monitor-lined control room that seems to exist only in movies, Detective Reese (Stephen Moyer) and Detective Burquez (Radha Mitchell) attempt to decipher this footage in the hopes of nabbing the killer, who wears a welder’s mask and wields a blowtorch attached to a tank by a long cable, which doesn’t hinder his ability to surprise and slaughter his victims. His knuckle-headed prey help his cause: When not screaming at the top of their lungs, they make sure to tip off their location at every turn by shining camera lights around pitch-black buildings.

Evidence positions the police as the audience surrogate, intent on figuring out the identity of the masked fiend. Yet the script, written by John Swetnam, goes no further than that basic idea, until a conclusion that proffers a thinly sketched commentary on horror filmmakers’ complicity—if not outright guilt—in the homicidal entertainment they create. For the most part, the framing device is an unnecessary distraction, as the recordings found at the scene of the crime are often played at length, turning the film into just another third-generation offspring of The Blair Witch Project.

The found footage begins with fragmented snippets of people joking around at home and preparing for big career events and their forthcoming trip. It segues into travelogue small talk and the establishment of peripheral players who are clearly destined to become fodder for the killer’s blowtorch. Once the true madness begins, herky-jerky camerawork abounds, with people clumsily running through the darkness and slowly navigating spooky hallways—typical genre hallmarks that Osunsanmi gussies up with the occasional jolt-scare from environmental noises or bursts of feedback-y video static. 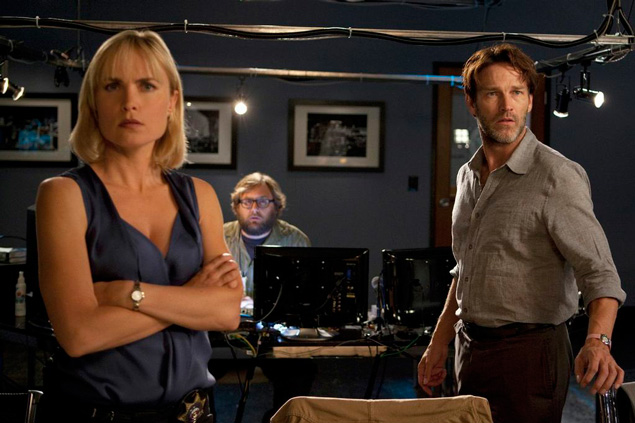 Swetnam’s script is so lazy that it introduces Reese successfully pleading with Burquez to let him rejoin the force, but never bothers to establish what initially landed the scruffy hotshot cop on leave. Left to play one-dimensional types who sit around an office pointing at screens, uttering faux-techie gibberish like “Capture again, then overlay! Zoom 35 percent! Pan the image!”, the leads quickly take a backseat to the grainy home recordings that dominate Evidence. Given that the camera always seems to fall or get knocked into the perfect position to capture the craziness at hand, any vérité pretenses soon prove ridiculous. But it’s no more ridiculous than the plot, which incessantly wastes time trying to flesh out its characters, but barely bothers with building suspense.

The film routinely takes narrative short cuts in order to fast-forward to its money-shot kills, which speak to viewers’ demands and the way filmmakers pander to them if everything about the action weren’t so devoid of cleverness or originality. But the evidence here merely suggests that the only things more indestructible than horror-movie fiends are the tired tropes their sagas employ.