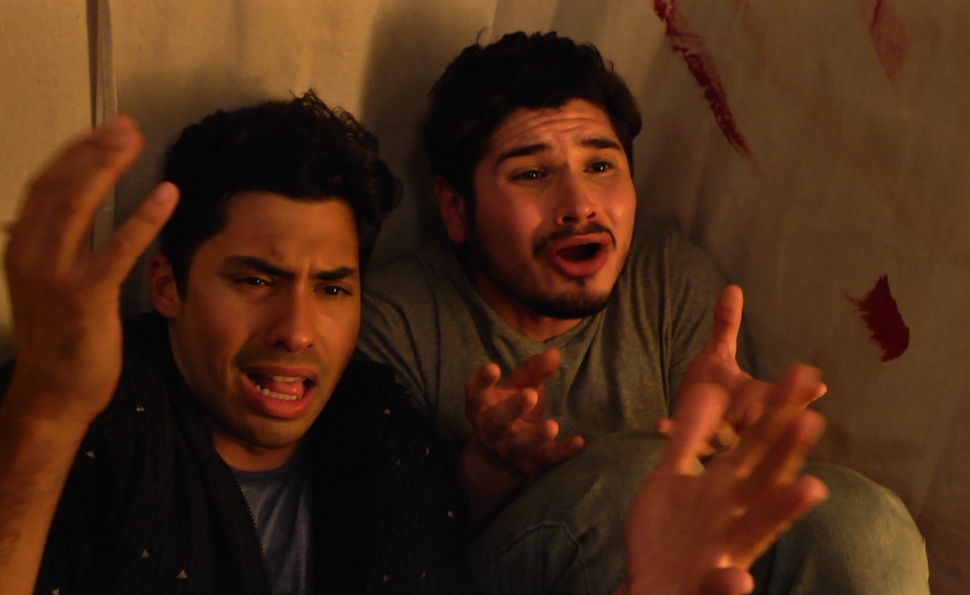 Like any cultural phenomenon, the Paranormal Activity franchise was quickly parodied to death, with the nadir (judging from the trailer) being Charlie Sheen’s testicle-punishing cameo in Scary Movie 5. Still, the ostensibly comic variations keep on coming, if only because they can be made for pocket change. Ghost Team One looks intriguing for a few minutes, in that its cast is predominantly Hispanic, with no big deal made of the fact—rarely does a movie set in Los Angeles acknowledge the city’s makeup (non-Hispanic whites constitute only 29 percent of the population) in a context not involving gangs and/or prison. It’s a bit of a shock, then, to discover that the film is not just unfunny, but appallingly racist, treating Asians as either mincing stereotypes or (arguably worse) complete non-entities. Ghost Team One may be the scariest picture this Halloween season, demonstrating that material so blatantly offensive can still be acquired by a major studio, and released mostly without comment.

For a while, the film’s assaults are aimed only at propriety, though the jokes are pretty feeble. Roommates Sergio (Carlos Santos) and Brad (J.R. Villarreal)—one of them timid, the other a major horndog—both fall for Fernanda (Fernanda Romero) at a party, then discover she’s into the supernatural. Since Sergio has experienced some weirdness in their house, he and Brad promptly buy a bunch of cheap cameras and install them in every room, inviting Fernanda to join the crew of their alleged ghostbusting documentary. As it turns out, there really is a ghost, and it appears to be a) female and b) randy, resulting in epic jerk-off sessions, on-camera ghost sex (featuring the now-standard inexplicably moving sheet), and a tentative ménage à trois initiated by Fernanda solely as a means of attracting the spirit via carnal energy. Despite an R rating, however, the movie’s humor level is strictly grade-school naughtiness, exemplified by the moment when Sergio prematurely ejaculates in his pants, but it looks as if he simply wet them.

For no apparent reason—at least at first—the primary camera within the narrative is wielded by a never-seen Chinese guy named Billy Chen; some opening text states that he answered Sergio and Brad’s ad on Craigslist. (The film premièred at Slamdance 2013 under the title Billy Chen Presents: Ghost Team One.) Since this camera operator, who speaks only once in the entire movie (despite being omnipresent), has no function except to allow the main characters to stay in front of the lens, there’s no good reason to make him Asian… until the ghost is also revealed to be Asian. It’d be getting into spoiler territory to note precisely where this development ends up, but suffice it to say that Ghost Team One’s climax is a full-scale minstrel show, featuring a performance almost as ghastly as Mickey Rooney’s in Breakfast At Tiffany’s. No doubt the filmmakers were attempting to send up J-horror conventions, but that’s hardly an excuse for yellowface, not to mention the movie’s apparent inability to distinguish between Japan and Vietnam. (It throws in some good ol’ “ching-chong” for good measure—spoken by an asshole character, admittedly, but still treated as quasi-acceptable.) What might have at least been a quietly progressive clunker instead becomes a repugnant fiasco. Rule No. 1: Try not to make Charlie Sheen look good by comparison.