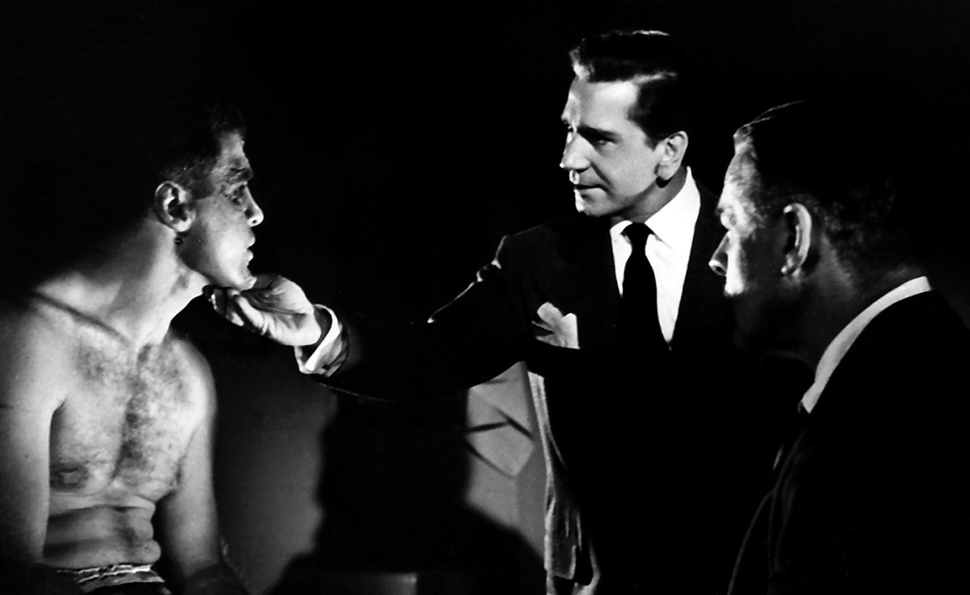 Suggesting that sometimes it’s impossible to be aware of living in a golden age, the New York Times review of The Big Combo refers to it as both a “rather old-fashioned crime melodrama” and a “misguided antique.” Film noir had been around for a while by the time of the film’s 1955 release, so perhaps familiarity bred contempt in the Times’ reviewer. There certainly isn’t anything particularly novel about The Big Combo’s narrative elements. Cornel Wilde stars as Leonard Diamond, a cop determined to take down Mr. Brown (Richard Conte), a bookkeeper for an out-of-the-picture crime boss, now apparently pulling the strings himself. Caught in the middle is Susan (Jean Wallace), a sad-eyed moll who realizes she’s in over her head, and doesn’t see any way out except suicide. She attempts it in one of the film’s early scenes, then spends the rest of The Big Combo looking as if she wishes she’d succeeded.

That’s an example of the extremes to which The Big Combo goes. Brown isn’t just a bad guy, but a sadist who holds Susan in an erotic thrall. (One scene finds Conte moving in on Wallace with predatory intensity, as the camera captures a look that’s half fear, half rapture.) Then there’s Diamond, whose interest in the case extends beyond stopping crime to his own fixation on Susan, which seems to motivate him as much as any desire to see justice done. The Big Combo was directed by Joseph H. Lewis, whose earlier noir, Gun Crazy, focused on characters with little interest in separating their lusts for sex and violence, and it was written by Philip Yourdan, whose screenplay for Johnny Guitar provided Nicholas Ray a blueprint in which to play with sexual roles. The Big Combo isn’t as wild or daring as either film—though Lee Van Cleef and Earl Holliman do play toughs in a thinly coded gay relationship—but it’s an unrelentingly tough film, and toughly played by all involved. At one point, Brown advises one of his heavies to shoot himself in the head if caught. “It’ll make everything simpler.”

But John Alton’s camerawork is what truly sets it apart. The influential, Hungarian-born cinematographer had worked in noir before, but here, he seems determined to deliver a master class in noir style, filling the screen with deep shadows, piercing beams of light, and creeping fogs. Lewis uses his work to great effect. A few scenes spin in circles as the plot works toward not-so-shocking revelations, but the film’s back half is littered with memorable setpieces, including a torture scene involving a hearing aid, hair tonic, and pounding jazz music, and a pair of scenes set in an airline hangar that pay homage to Casablanca’s finale. Alton gives the film a classic noir look, but the combined efforts give the film a classic noir feel, a sense that goodness rarely triumphs over corruption, and that the world is governed by rules as black-and-white as the film. “First is first,” Brown is fond of saying, “and second is nobody,” and little within the film proves him wrong. Noir wasn’t new in 1955, but The Big Combo still found plenty of life within its limits.

The big zero. But it’s worth noting that, apart from a couple of rough patches, the film looks great, having been restored by the UCLA Film & Television Archive in association with the Film Foundation and then remastered in HD by Olive Films and Ignite Films.