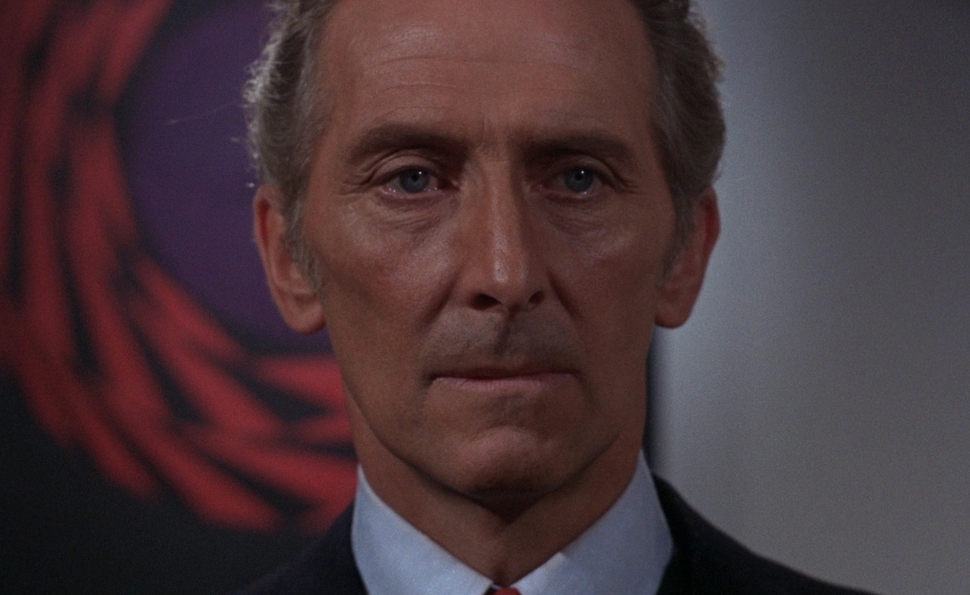 The late 1960s were wild years for horror filmmakers, as society’s increasing permissiveness began to affect what the screen could show. A lot of betwixt-and-between movies came out in this era: sleazy B-pictures with major stars and mainstream distribution, and classier studio projects that dabbled in explicit sex and gore. Corruption fits both of those descriptions. In 1967, British exploitation-merchant Compton-Cameo signed a deal with a Columbia-affiliated American company to distribute its product, then turned to its top director, Robert Hartford-Davis—the man who made the 1963 youth-gone-wild sexploitation hit The Yellow Teddy Bears and the science-fiction British Invasion musical Gonks Go Beat—to helm a blood-spattered thriller that turned out to be the only film to come out of this transatlantic partnership. Corruption especially scandalized U.K. critics when it was released in 1968, and its own star, Peter Cushing, disowned it, saying it was much nastier on the screen than the script had led him to believe it would be.

But that nastiness has to be considered in the context of the times, because by today’s standards—or even the standards of cinema just a few years later—Corruption is fairly modest. Based loosely and unofficially on Georges Franju’s horror classic Eyes Without A Face, Corruption stars Cushing as Sir John Rowan, a surgeon whose fiancée Lynn (Sue Lloyd) suffers a disfiguring accident that John tries to fix via laser-aided skin-grafts, stabilized with the help of glands he harvests from women he murders. Corruption was released in a few different versions around the world, with varying levels of raunchiness, and sometimes under the titles Carnage or Laser Killer. (Grindhouse’s DVD/Blu-ray combo pack includes both the tamest and the smuttiest cuts.) But even the version of Corruption that features John stabbing a topless prostitute is about 95 percent tasteful suspense and only 5 percent beheadings.

What’s noteworthy about Corruption today isn’t that it has the venerable Cushing in a scenario that out-Hammers Hammer Films, but that it’s a snapshot of England à la Mod. Because Lynn is a model, she and John have hip, fashionable friends who throw hot parties, giving Hartford-Davis and his producer/cinematographer Peter Newbrook the chance to film attractive-looking young people dancing about in tight-fitting clothes. This is all setup for Corruption’s bizarre third act, where a group of angry hippies charges into John and Lynn’s home and threatens them with violence because John’s list of victims includes one of their tribe. The film takes a sudden turn. It’s no longer the story of one arrogant doctor who loses his soul while saving his wife-to-be; it’s the story of a well-heeled couple under siege by longhairs.

Did Hartford-Davis and screenwriting brothers Derek and Donald Ford intend this twist as a commentary on class, or the counterculture? More likely, they all just wanted to include as many salable elements in Corruption as possible. But that everything-goes-in-the-pot spirit is what makes this period in genre filmmaking so fascinating. No one knew what was in-bounds any more, so writers, directors, and producers squeezed in all they could, letting the audience draw their own lines.

Grindhouse gave Corruption the kind of treatment that Shout! Factory and Criterion typically give to older films, supplementing a beautiful-looking Blu-ray transfer with vintage promotional materials and substantial interviews with some of the surviving cast members (who wax nostalgic about how the atmosphere of the swinging 1960s changed British cinema). The set also adds a marvelously entertaining commentary track by U.K. horror scholars Jonathan Rigby and David Miller, who are full of fascinating tidbits about the history of the production and its cast (and its wretched novelization, which they frequently cite with mocking disdain). The two are also engaged with watching the movie itself: chuckling over Cushing’s many fight scenes, cooing over some of the better camera angles, even taking note of the enormous ham in the corner of one shot. They’re terrific company, and make a strong case for Corruption as a classic of its kind.