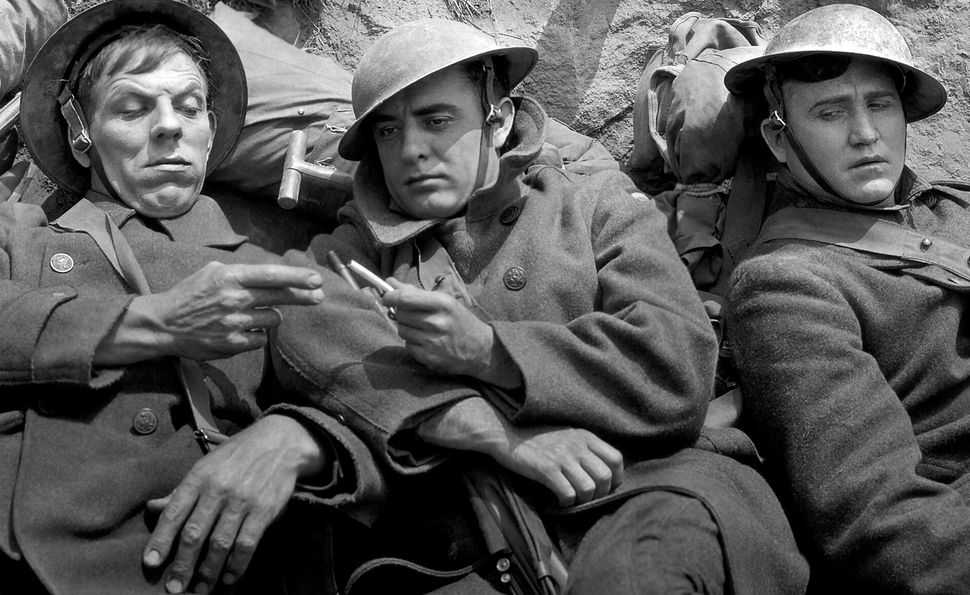 On the commentary track for the new Blu-ray edition of the 1925 World War I film The Big Parade, historian Jeffrey Vance describes some of his interviews with silent-era Hollywood filmmakers, and reminds viewers what those men and women always cautioned: that silent cinema wasn’t about realism, it was about expressing ideas through images to an audience that was paying close attention to every gesture and insert. It was a collaboration between the film and the imaginations of the people watching. That’s what makes the era’s epics so impressive. It’s one thing to ask audiences to connect the dots in a slapstick two-reeler or a domestic melodrama, but for a story that spans years and nations, it takes a remarkable degree of control.

King Vidor had been directing motion pictures for around 12 years—since he was a teenager—when he tackled Laurence Stallings’ novel Plumes for MGM, turning it into The Big Parade. Vidor didn’t have any special affection for the book. He wanted to wrestle with a powerful theme like “war,” in hopes of making a picture that would play the big houses and run for more than a week. He succeeded spectacularly. The Big Parade wasn’t just an international hit; it immediately set the standard for Hollywood war movies, and earned rapturous reviews from critics who called it the screen’s greatest achievement since The Birth Of A Nation a decade earlier.

The battle scenes in The Big Parade are what stand out even today—in particular, a march through the woods directly into enemy lines, shot with cameras that either move inexorably toward the danger, or show the resolute faces of American soldiers walking forward while their comrades die behind them. But the reason those scenes are so effective is because Vidor and screenwriter Harry Behn take the time to define the people attached to those faces. John Gilbert stars in The Big Parade as James Apperson, a devil-may-care playboy who joins the Army to impress his industrialist father and soon befriends two working-class mugs, Slim  (Karl Dane) and Bull (Tom O’Brien). A lot of The Big Parade is devoted to the three buddies hanging out: shoveling manure together, laughing at the rock-hard cakes they get in care packages from home, having a tobacco-spitting contest, and trying to woo the French girl (Renée Adorée) whose farm has become their camping ground.

Inevitably, the titular “big parade” begins: the long, proud march onto the battlefield, followed by the more mournful convoy of ambulances hauling away the dead and wounded. In later years, Vidor lamented that a movie he intended as anti-war ultimately plays more as a story of how war makes men out of boys and forges friendships that defy barriers of class and nationality. But the overtones of tragedy are still there, as are the depictions of military life as brutish and dirty, with individual will sublimated to the needs of the machine. (“Who the hell is fighting this war, men or orders?” Apperson asks when he’s told to stay in his trench rather than rescuing a friend.) The Big Parade’s triumph was that at a time when a lot of movies were dealing in broad abstractions—due to the nature of silent filmmaking, as well as the audience’s expectations—Vidor told a big story through the one-of-a-kind mugs of ordinary doughboys.

Vance’s commentary is the major extra here, with the scholar quoting extensively from reviews, interviews, studio notes, and history books to describe both what The Big Parade got right about WWI, and how the film itself evolved from an ordinary war movie into one of MGM’s biggest projects. The commentary also includes audio excerpts from an oral history that Vidor did with The Directors’ Guild Of America, in which he talks about how he and Behn wrote the screenplay on one long train ride (endeavoring to “cut out the bunk” from other war movies), and how he brought in a metronome to help pace the battle sequences. The best point Vidor makes is that wen some questioned the casting of the handsome romantic lead Gilbert as “typical GI,” he answered that since there’s no such thing as a “typical GI,” he felt it was better to build the movie around a character, not a symbol.