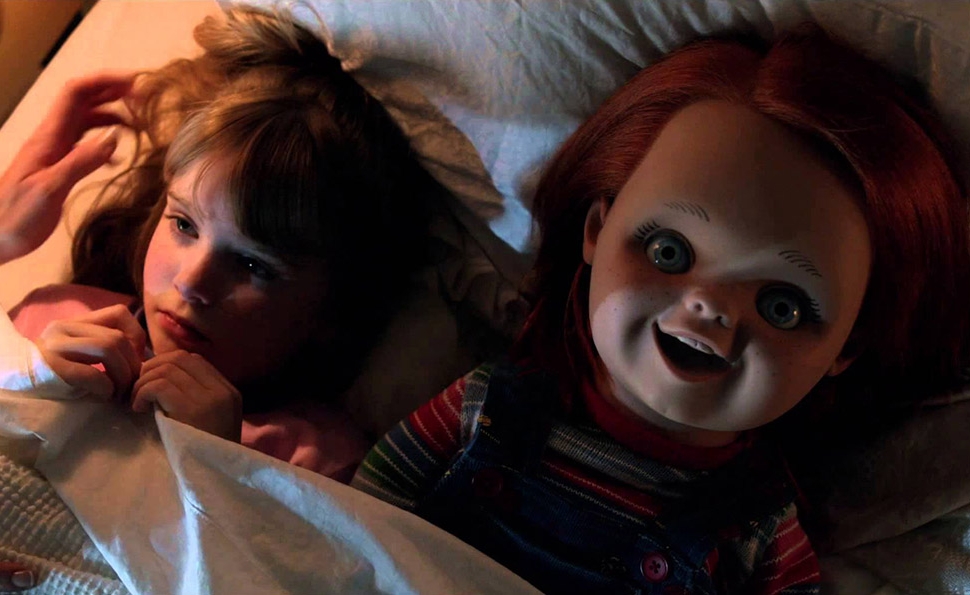 Ronny Yu’s delightfully insane 1998 horror comedy Bride Of Chucky didn’t take the Child’s Play horror-movie franchise in a bizarre new direction so much as it unleashed the batshit-crazy camp comedy that was lurking within it all along. With Bride Of Chucky and its even kookier 2004 sequel, Seed Of Chucky—which damn near did away with the horror element altogether, in favor of an over-the-top, go-for-broke show-business satire—the films stopped emulating Val Lewton and began worshipping at the altar of John Waters, who not-so-coincidentally had a major supporting role in Seed Of Chucky as a sleazy photographer.

Once the franchise unleashed the campy id lurking underneath its aspirations to serious horror, there was seemingly no going back. After acknowledging the absurdity of trying to generate terror from the deranged bloodlust of a renegade Cabbage Patch Kid, it’s hard to set back the clock and play the same material straight. The Child’s Play franchise has permitted, even encouraged, audiences to laugh at it for two consecutive films, yet it makes a surprising, successful reversal with Curse Of Chucky, the franchise’s serious-minded, at times even dour fifth sequel.

As if to acknowledge that Chucky had devolved into a cartoonish figure of high camp since he was introduced with 1988’s Child’s Play, the new film doles out his appearances sparingly in the beginning. For much of the the first half, his presence is felt more than seen. Writer-director Don Mancini, who has shepherded the character’s strange evolution as the screenwriter of all of the Child’s Play movies, understands and honors the power of suggestion, knowing that a quick flash of plastic hands up to no good, or the sound of tiny plastic feet scuttling across a floor can be jolting where a full-body shot of a demonic toy mugging and spouting foul-mouthed quips is often laughable, whether or not the filmmakers intend for it to be. (In Bride Of Chucky and Seed Of Chucky, the laughs are definitely intentional.)

Curse Of Chucky feels like a return to basics, not just for the Child’s Play series, but for the horror genre as a whole. Mancini is a real student of horror. Where Child’s Play was a newfangled update of the haunted-doll subgenre (a tradition often rooted in the inherent creepiness of ventriloquists’ dummies), Curse Of Chucky is essentially a haunted-house movie minus the haunting, an old-school horror movie that takes place in a huge, gothic house full of shadows and secrets, where it is forever a dark and stormy night.

This home is the dwelling of Nica, played by Fiona Dourif, daughter of Oscar-nominated character actor Brad Dourif, who reprises both his voiceover role as Chucky and his live-action role as Charles Lee Ray, the serial killer whose spirit inhabits the doll. Nica is a plucky, resourceful, but luckless paraplegic whose mother turns up dead not long after the delivery of a mysterious package containing Chucky, who has cleaned up nicely since the last two films, and now sports the same disconcertingly bland, vacant visage he did in the first three installments.

The death of Nica’s mother attracts the attention of Nica’s condescending older sister Barb (Danielle Bisutti), who arrives with her yuppie husband Ian (Brennan Elliott), daughter Alice (Summer Howell), and sexy nanny Jill (Maitland McConnell) in tow to try to convince Nica to sell the spooky old house so they can split the profits. But Nica has secrets of her own, at least one of which involves the nubile nanny stripping down to her underwear in what is either shamelessly gratuitous T&A, a winking homage to the long, distinguished tradition of shamelessly gratuitous T&A (on the commentary, Mancini mumbles something about it being a tribute to Hammer horror films), or both.

Meanwhile, a storm rages outside, and the squabbling extended family begins to die a series of gruesome deaths. Curse Of Chucky limits Chucky to the sidelines in the early going—the first time his plastic lips curl into a real sneer and he reveals his violent, profane real personality, it represents a jarring shift in tone that seems to herald a return to the anarchic comedy of the last two films. Dourif plays Chucky like a demented parody of his One Flew Over The Cuckoo’s Nest co-star Jack Nicholson, only with his lurid urges and murderous needs incongruously housed in the body of a creepy-cute doll. In the film’s final act, Chucky rampages through the film’s impressive haunted-house set like a 2-foot-tall tall, plastic version of Jack Torrance.

Curse Of Chucky gets wilder and crazier as it goes along, but it surprisingly doesn’t sacrifice atmosphere or tension for laughs, even as it circles back to the raucous comedy of Seed Of Chucky and Bride Of Chucky in its final minutes. Like seemingly all horror sequels, Curse Of Chucky teases a sequel, but unlike the vast majority of horror sequels, this overachieving, surprisingly solid and scary shocker makes that seem like a winning proposition, on DVD or in theaters.

The DVD/BD for Curse Of Chucky includes a standard-issue making-of documentary, some forgettable deleted scenes, and a gag reel, but the real attraction is a sweet, energetic, upbeat, and surprisingly engaging commentary from Fiona Dourif, Mancini, and puppeteer Tony Gardner, which provides some interesting background for the film. Mancini explains that making the movie an homage to the haunted-house genre was partially a budgetary decision, rooted in the simplicity and convenience of shooting a $5 million movie with a 30-day shooting schedule around a single central location. He adds that rights issues led to the film being a “tonal reboot” and straight sequel rather than the long-rumored remake. But the most uplifting moments in the commentary reveal how proud Brad Dourif was of his daughter, and how overjoyed he was to have her star in a sequel to a franchise that began while she was still a little girl. For the Dourifs, at least, making Curse Of Chucky together was a heartwarming family affair.