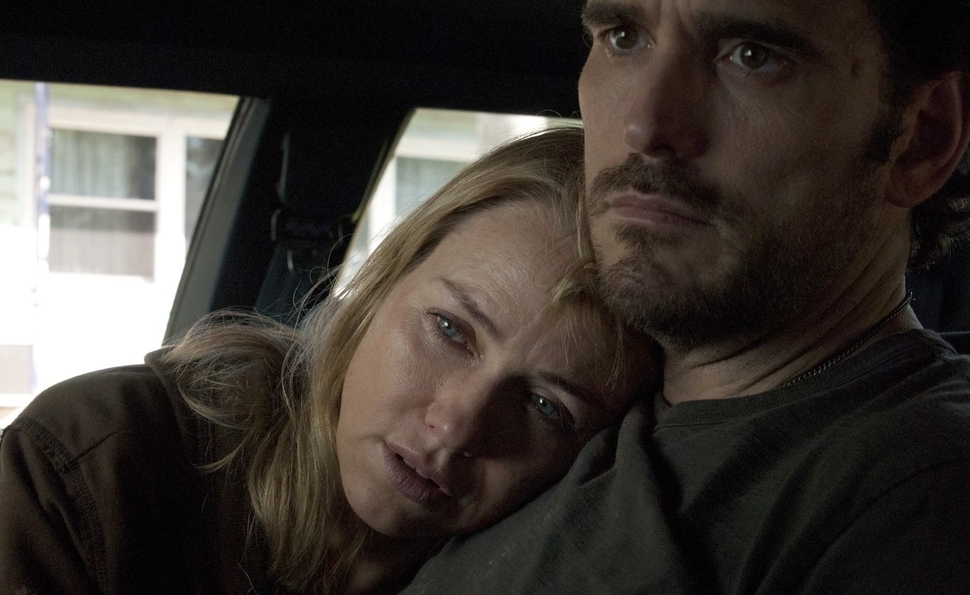 If poverty comes up at all in an American film, independent or otherwise, it tends to be more of a starting point than a condition, a situation for the hero to transcend or escape, rather than find ways to manage. The virtue of Sunlight Jr., Laurie Collyer’s first writing-directing project since 2006’s Sherrybaby, is that it tries to understand the working poor, by following a Florida couple that has to survive on one hourly convenience-store wage and a waning trickle of disability checks. There’s some faint talk of social advancement through a college training program, but the reality of living paycheck-to-paycheck is that the next one can never be missed. And if there’s ever an emergency, forget college: It’s time to ask for another shift.

Set in some strip-mall hell in deepest Florida, Sunlight Jr. refers to the grimy gas-and-sip where Melissa (Naomi Watts) keeps a tenuous hold on the daylight shift. She bristles when her middle-aged manager (Antoni Corone) makes lewd remarks—when she comes in after a rainstorm, he asks if it’s him that’s gotten her wet—but a minimum-wager like herself can’t afford a sexual-harassment claim, especially with a past that includes pill addiction and a jail stint. Happily for Melissa, her boyfriend Richie (Matt Dillon) loves her and treats her right, but he’s confined to a wheelchair and reliant on her for money. A typical day for Richie includes siphoning gas from other people’s cars, trying to sell a refurbished VCR to a bartender, and nursing the remains of a bottle of liquor. Between them, they barely make enough scratch to pay rent at a seedy motel room.

To the seductive rhythms of Crazy Town’s rap-rock non-classic “Butterfly,” Melissa and Richie conceive a baby that’s unplanned, but not unwanted. Richie had assumed he was shooting blanks, so the pregnancy is cheering news in itself, and the two have giddy conversations about getting married and choosing a name for the child. But reality bears down on them: Richie says he’ll take care of her, but he doesn’t know how. They have no insurance. And before they even get out of the first trimester, Melissa has to take the graveyard shift just to make ends meet. They can’t plan for nine months away when tomorrow looks impossible.

As with Sherrybaby, a drama about a young mother (Maggie Gyllenhaal) struggling with addiction, Collyer has trouble dealing with down-to-earth subject matter without pushing too far. The stresses bearing down on Melissa and Richie, like the crippling cost of one panicked trip to the obstetrician, are so painfully real that they don’t need augmentation. Yet Collyer piles on the hicktown excesses anyway, including casting Norman Reedus as Melissa’s sleazy, violent, stalker ex-boyfriend and Tess Harper as her mother, a negligent foster parent who keeps 11 undernourished children under her roof and still barely collects enough money from the state to pay rent. (Her narratively convenient landlord? The stalker.)

But as Collyer risks caricature—if a caricature of Florida is even possible at this point—Watts and Dillon ease Sunlight Jr. back to more grounded, fundamental truths. Melissa and Richie love each other, that much is clear, but love does cost a thing, especially when the price of basic survival is on the line. (Had Reedus’ character not been painted so viciously, it might have set up a stronger contrast for Melissa between a good man with no money and a roughneck with plenty.) Watts and Dillon have a tender rapport together, and there’s no reason to believe Melissa and Richie’s relationship wouldn’t flourish under better circumstances, if she weren’t run down from double shifts, or if he didn’t explode in anger over a doctor visit. Poverty forces them into narrowing set of choices. That’s rare on American movie screens, but certainly not rare in America.