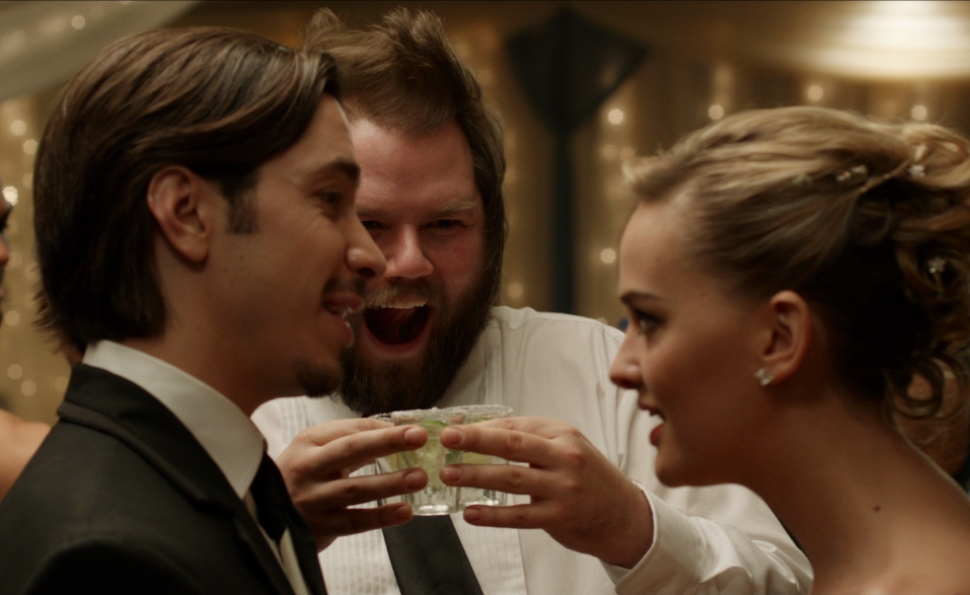 Most people exit the theater or stop the DVD/Blu-ray/file/stream/whatever as soon as the closing credits begin, unless they’re expecting Samuel L. Jackson to show up and recruit a new Avenger or something. For those diehards who stick it out to see who gets thanked vs. who gets specially thanked, however, there are tiny, interesting crumbs of information to be gleaned. One of these is the film’s copyright name (usually the very last thing to scroll by), frequently indicating its original or working title. For example, Best Man Down—which might well have been renamed to get it closer to the beginning of the alphabet, an increasingly common VOD strategy—was apparently once known as Lumpy, which is both less generic and more fitting. Lumpy is the nickname of a significant character (the eponymous best man, in fact), but it’s also a fair description of the movie itself: an earnest-bordering-on-sappy serving of dramatic oatmeal with ungainly chunks of broad comedy thrown in here and there.

To be fair, some of that is deliberate misdirection. In its opening minutes, Best Man Down looks like a typical wedding-disaster yukfest, as newlyweds Scott (Justin Long) and Kristin (Jess Weixler) attempt to deal with the rambunctious, drunken behavior of Scott's best man, Lumpy (Tyler Labine), at the reception. Fat, loud, and uninhibited, Lumpy is a wild man in the tradition of everyone from John Belushi to Zach Galifianakis, and he causes enough trouble early on that it looks as if he’ll be the movie’s primary comic motor. Shortly after being deposited back in his hotel room, however, Lumpy falls off the bed (while leaping about to Ratt’s “Round And Round”), stumbles outside, and drops dead atop a cactus. Rather than going on their honeymoon, Scott and Kristin are now forced to head home to Minneapolis for Lumpy’s funeral; they also feel obligated to break the news to Lumpy’s girlfriend, Ramsey, whose existence they’ve only just discovered. Ramsey (Addison Timlin) turns out to be just 15 years old, however, and that’s merely the first indication that Lumpy had a side his best friend never knew.

Best Man Down introduces Ramsey right off the bat, long before it reveals her connection to the main story, and establishes that she’s a smart, sensitive kid trapped in a horrific white-trash home, with a weak-willed mother (Frances O’Connor) who’s dating a cartoonish meth dealer (Evan Jones). So even as Kristin recoils in horror at the sight of Ramsey, it’s pretty clear that this isn’t a movie about statutory rape. Judiciously placed flashbacks reveal the extent to which Lumpy's apparently fucked-up behavior—not just the drunken buffoonery, but dropping out of law school, stealing money from his employer, etc.—was motivated by noble impulses. (Even his sudden death isn’t what it seems.) To the extent that Best Man Down is about the unlikely relationship between Lumpy and Ramsey, it’s touching, if a bit mawkish; first-time writer-director Ted Koland isn’t afraid to embrace sincerity, and Labine (Dale from Tucker & Dale Vs. Evil) and Timlin (Afterschool) have a lovely, sweet-natured rapport in the flashback scenes.

Those scenes are a fairly small percentage of the movie, though. Most of it centers on Scott and Kristin, who bicker unmemorably about his decision to quit his job and her reliance on Ambien and Xanax. To some extent, this is the story of how their discovery of Lumpy’s secret saves their already rocky marriage, which is perhaps the least compelling form the material could take. Long and Weixler are appealing, and believable as a couple, but that doesn’t prevent them from seeming increasingly irrelevant. And then there’s the random, miscalculated goofiness: Shelley Long’s sitcom-style turn as Kristin’s nosy mother, for example, or a truly bizarre scene in which Kristin, seeing Lumpy’s corpse at the hospital, feels compelled to open the body bag and sneak a look at his junk. (She’s caught in the act by Scott, but they quickly agree never to speak of it again, and don’t.) Throw in the Breaking Bland meth subplot (crucial to the plot, but clumsily executed) and a small-town gay priest (Michael Landes), and the movie’s tearjerking core starts to get buried beneath needless distractions. Only the fine print—“CAP-LUMPY, LLC is the author and creator of this motion picture”—offers a glimpse of the movie that might have been.