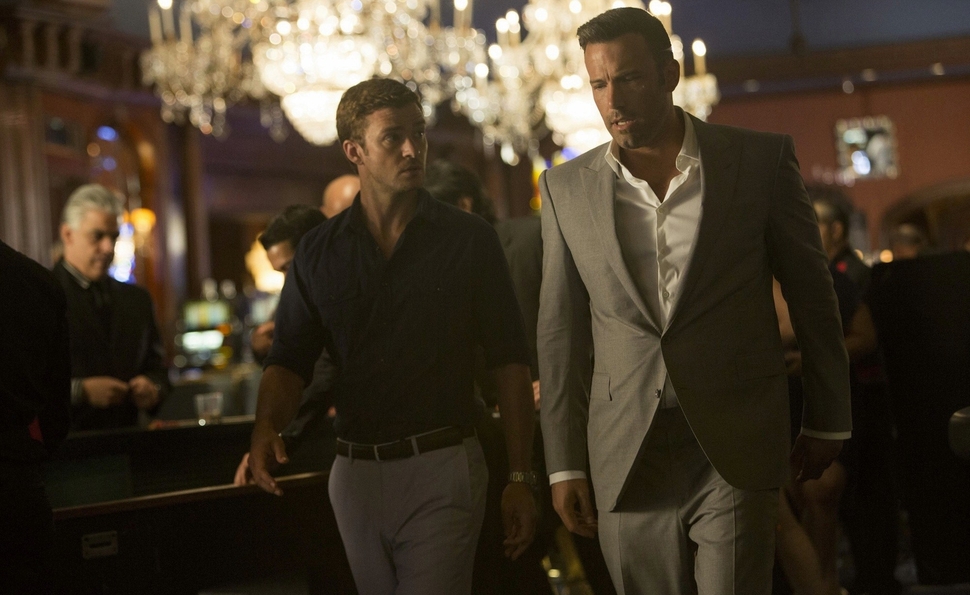 Five years passed between the poker thriller Rounders hitting theaters and the perfectly surnamed Chris Moneymaker, an accountant from Tennessee, winning the 2003 World Series Of Poker main event, setting off a poker boom that poured billions into television, casinos, and online gaming sites. When that poker boom hit, Rounders resurfaced as a touchstone. Some viewers identified with John Malkovich’s “Teddy KGB,” the Russian gangster and poker shark with a weakness for Oreo cookies. Others saw themselves as “grinders” like John Turturro’s Joey Knish. But all were lured by the high-wire artistry of No Limit Texas Hold-’Em, where entire chip stacks could be doubled or lost on a single hand. The script, by Brian Koppelman and David Levien, understood the language of the game as no poker film had before, and it also had (albeit with a certain amount of dramatic embellishment) a feel for the underground clubs that pocked New York in the days before police raids and online sites wiped most of them off the map. But more than that, it understood the mind of a great poker player, which values fairness and meritocracy in a gambling world that isn’t always on the level. Morality in Rounders isn’t about giving up poker for a more “legitimate” field; it’s about playing the game straight up.

The credits for Runner Runner don’t appear until after the movie’s over, but it doesn’t take long for the script to establish itself as Koppelman and Levien’s handiwork. Just like Matt Damon’s character in Rounders, Richie Furst (played by Justin Timberlake), a skilled and normally pragmatic player, blows his entire bankroll in one night and winds up abandoning higher education for a chance to get it all back, with interest. And once again, Koppelman and Levien throw around poker-wonk lingo like “short-term variance” (i.e. the luck factor that would normally explain how a superior player could lose all his money) and go deep into the thinking of online sharks, who are willing to overlook the threat of collusion and offshore chicanery for the chance to pwn four tables’ worth of fish simultaneously. For player and site, it should be a symbiotic relationship: Richie posts a long-term profit, the house gets the rake, and the people who go broke do so because they lack the discipline and skill. That’s meritocracy at work.

What’s fatally missing from Runner Runner is a director like Rounders’ John Dahl, who made a seductive modern-day noir out of the secret parlors and back-room games that its characters frequent. Koppelman and Levien seem less assured about the outlaws who run online gambling sites from their Caribbean safe havens, and director Brad Furman, who did capable work with the Matthew McConaughey legal thriller The Lincoln Lawyer, doesn’t have the same feel for the milieu. The moment Runner Runner touches down in Costa Rica, it turns into a more generic morality play, where the spoils of instant success—luxury cars, shimmering pools, expensive parties, and available women—are trotted out before the cost inevitably reveals itself.

Runner Runner is set in the present day, after “Black Friday” (April 15, 2011), when federal charges of money-laundering, racketeering, and a Ponzi scheme led three top poker sites to cut off their business to U.S. customers. In this new environment, Richie makes his Princeton tuition money by shepherding students and professors to online gambling sites and earning a commission for each one. When the dean demands he cut it out, Richie stakes his entire savings on an all-night session and winds up losing it all in suspicious fashion. After analyzing the hands, he concludes that he was defrauded, and he makes the impulsive decision to fly down to Costa Rica to confront gaming giant Ivan Block (Ben Affleck) personally. Ivan surprises Richie by not only making restitution, but offering him a chance to make millions in the business. Richie accepts without a second thought, but a rift soon grows between them over Ivan’s shady dealmaking tactics and Richie’s romantic interest in his sultry assistant, Rebecca Shafran (Gemma Arterton).

Whether holding court with a monologue likening himself to Napoleon in Malta or tossing raw chickens over the dock to the crocodiles below, Affleck seems to be having the time of his life as Ivan, who all but twirls an invisible handlebar mustache. At times, Runner Runner suggests that Ivan is more survivor than villain, bribing and manipulating whoever he can to keep his rogue business afloat. But as the film goes further along and the plot starts to thicken, it gets less specific about the ins and outs of its offshore milieu, and more invested in the twisty, cat-and-mouse gamesmanship of a standard thriller. It puts a premium on sleight-of-hand cleverness and glossy style, but it isn’t particularly clever or stylish.

Mostly, though, Runner Runner winds up playing against its initial strengths. Koppelman and Levien know a great deal about poker and the poker mindset, and it doesn’t require much exaggeration to tell a story about how hosting sites fleeced online gamers. But the best parts of Runner Runner feel like a Rounders facsimile—right down to the metaphor-heavy narration—and the worst seem like a case of mission drift, as if the filmmakers set out to make a behind-the-curtain thriller about online gambling, but got hung up in paying off the plot. Richie doesn’t take away much for his troubles, and the viewers take away just as little.