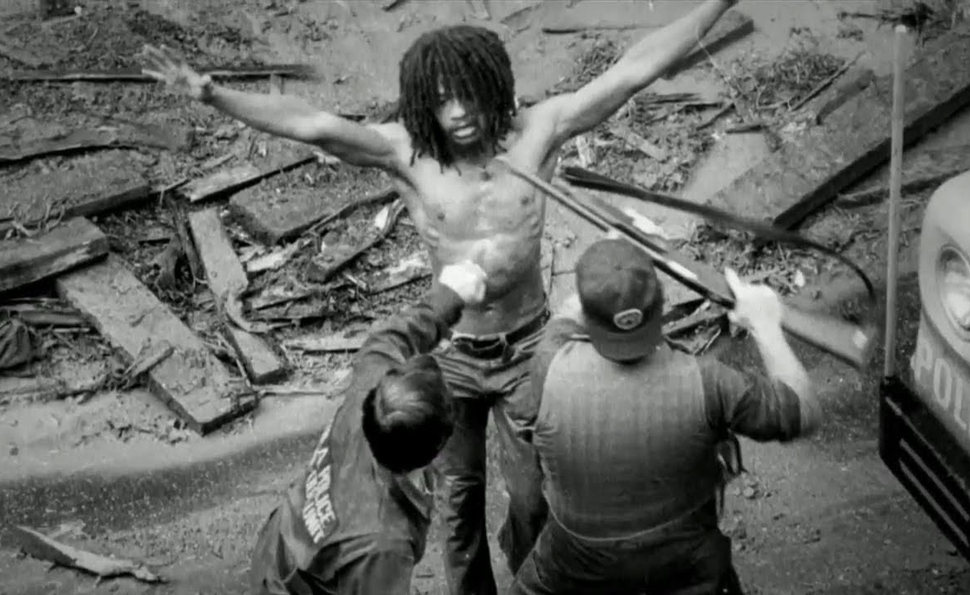 The second most striking thing about Jason Osder’s documentary Let The Fire Burn is that it’s composed entirely of archival footage. There are no interviews looking back on the mid-1980s events covered in the film, no voiceovers or interview questions overtly inserting Osder’s voice into the film. It’s like watching a single long news report that spans years. But the most striking thing is the actual story it tells with that footage. Let The Fire Burn is keyed around a single 1985 incident, when Philadelphia law enforcement ended a standoff with the mostly black separatist group MOVE by dropping a bomb on their house, and deliberately letting the resulting fire go unchecked. Ultimately, it burned out of control, consuming 61 homes and killing 11 of the 13 MOVE members holed up in the house, including five children. Granted access to Philadelphia’s extensive footage of the incident and the aftermath, including the city investigation that followed, Osder has pieced together a compelling, informative story that unfolds with a minimum of intrusive slant, spin, or interpretation.

The film is thinnest in the setup. MOVE, founded in 1972 by John Africa, is a radical revolutionary group with back-to-nature beliefs, but Let The Fire Burn doesn’t do much to explore its history, its seeming connection with the black-power movement, or the apparent paradox in staging a back-to-nature movement in the middle of a vast, crowded city. MOVE’s goals are largely expressed through its members’ startling home movies of chaotic courtroom training sessions for the adults (the assumption being that the members were likely to be arrested and need to know how to stand up for themselves) and education sessions with the children. Again and again, Osder returns to shots of naked kids with grotesquely distended bellies, repeating a MOVE chant or obediently distinguishing between a lemon, which they identify as “life,” and the camera, which they identify as “technology,” defined as something evil that wants to hurt them. While the in-house footage suggests MOVE’s home life, particularly the parts that upset the outsiders who characterized it as a cult, it reveals relatively little of MOVE’s goals or intents.

But that may be a deliberate choice, suggesting that no matter MOVE’s beliefs, the members didn’t deserve what happened to them. Osder first covers a major 1978 incident in which the group refused to comply with a city eviction notice, leading to a shootout that killed a police officer. It’s unclear where the fault lies in that incident—MOVE claims the police did all the shooting, but nine members were convicted and jailed, and police footage of three policemen brutally kicking, stomping, and beating one unarmed, surrendering, prone member is as incendiary as the Rodney King beating tape. The 1985 incident is even more fully documented, given shape by the commission interviews, which lay out a timeline and explain events, then seen through news cameras and city surveillance cameras on the site. MOVE’s point of view is represented via a heartbreaking deposition with 13-year-old survivor Michael Moses Ward, known in the group as Birdie Africa. (In an odd coincidence, Ward died of unknown causes in late September 2013.)

Let The Fire Burn is a fascinating look at official overreaction, government overreach, and the corrupting effects of prejudice on powerful institutions. But it’s also a look at the limitations of government, as Osder covers the long history of neighborhood complaints about MOVE’s home bases, and the city’s inability to take action against them without proof of criminal activity. The implication is that police frustration with MOVE-related incidents led to the 1985 deaths, stemming from the apparent official feeling that burning down their house would drive them out for good. There’s little sense that anyone on the city side deliberately set out to commit sanctioned murder, but in the aftermath, figures like the three officers involved in the 1978 beating and Police Commissioner Gregore Sambor give tellingly circular, opaque answers to pointed questions, while surviving MOVE members aren’t any more forthcoming or approachable on the witness stand.

While those shots of grubby, starved-looking children go a long way toward evaporating sympathy for MOVE (as does a group member cavalierly explaining in one shot that their pendulous bellies aren’t a sign of malnutrition, the kids just eat a lot), Osder’s leanings are still clear: He portrays the bombing and burning of the MOVE house as a shocking injustice, carried out by city officials who were never held fully accountable, largely because the victims were poor, black, and unpopular in their neighborhood. But while he has his biases, he presents the story calmly, with minimal authorial insertion in the form of captions laying out timelines and facts. The result is a journalistic document that’s far more convincing than a windy, self-righteous polemic or shrill editorial would be. As often as possible, Osder lets the footage speak for itself, and what it says is overwhelming and appalling.