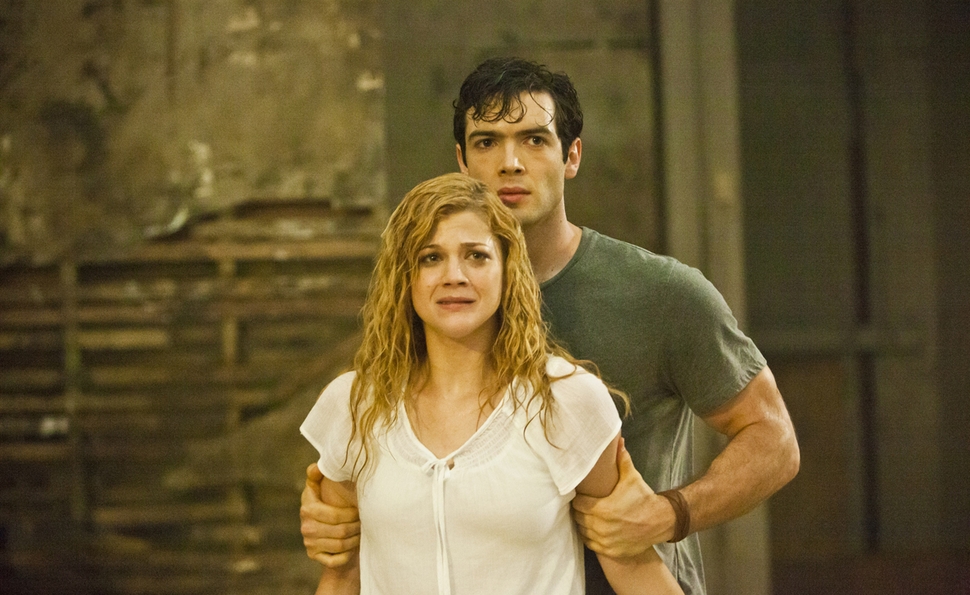 Nothing Left To Fear

Horror cinema’s distrust of rural folk continues unabated with Nothing Left To Fear, yet another tale of city dwellers moving out to the country and discovering only cult-like craziness. Tapped as the new pastor of Stull, Kansas, Dan (James Tupper) relocates to the secluded town with his wife Wendy (Anne Heche), son Christopher (Carter Cabassa), and daughters Mary (Wizards of Waverly Place’s Jennifer Stone) and Rebecca (Bellflower’s Rebekah Brandes). Their first encounter with locals involves Rebecca catching sight of hunky Noah (Ethan Peck) slaughtering a lamb on the back of his flatbed truck—a portentous sight given the subsequent action, in which the family finds itself in lethal trouble, courtesy of the town’s retiring man of the cloth, Kingsman (Clancy Brown).

Even when not intimating forthcoming creepiness via a graceless score by producer Slash (yes, of Guns N’ Roses fame), director Anthony Leonardi III isn’t subtle in suggesting that something’s wrong with this ostensibly cheery locale, what with Wendy spying a rat in her bedroom, and shortly afterward, biting into a piece of cake and finding a giant tooth inside. It’s a don’t-trust-the-natives setup modeled after many prior backwoods horror-shows, and it gets no new twists from Leonardi, who’s tediously dutiful in his adherence to convention. Noah and Rebecca begin a flirtatious relationship under the disapproving eye of Kingsman (Noah’s surrogate dad), and the film wastes copious time watching them frolic about at a nighttime fair and in sun-dappled fields and under bridges (in a faux-dreamy sequence that recalls All the Boys Love Mandy Lane) before getting to the real ritualistic business at hand.

It’s soon revealed that Kingsman and his fellow parishioners all believe God requires them to sacrifice new families to a giant watery pit that functions as a gateway to an ill-defined netherworld. Specifically, this process entails having a malevolent spirit infest Mary’s eyes and mouth via black tendril-y goo, thereby turning her into a shuffling, roaring ghoul with the ability to suck the life force from her beloved relatives. Thus, Nothing Left To Fear’s negative appraisal of rural inhabitants is complemented by a similarly disapproving view of Christianity, which is presented as either a vehicle for unholy terror or as a force that’s powerless to stop evil, since Dan’s faith proves useless against such adversaries.

As befitting its overall sloppiness, the film never properly explains why this blood sacrifice is actually necessary, or what it even accomplishes. (Does it keep the rest of the town safe by holding Satan at bay? Or is it just an excuse for Kingsman to stylishly slice up his arm during ritualistic bloodletting?). Rebecca’s dream sequences suggest premonitory powers that are never explained, Mary’s monster stalks her prey with derivative J-horror-inspired slouchiness and stringy hair, and a wannabe-spooky final note implies that this cycle of ceremonial carnage will continue. It’s stale B-movie rubbish of a barely watchable sort, albeit slightly more depressing than many of its genre compatriots, if only because Heche’s role is so shockingly perfunctory, it’s difficult to comprehend how her career could have possibly fallen into such a disreputable hellhole.