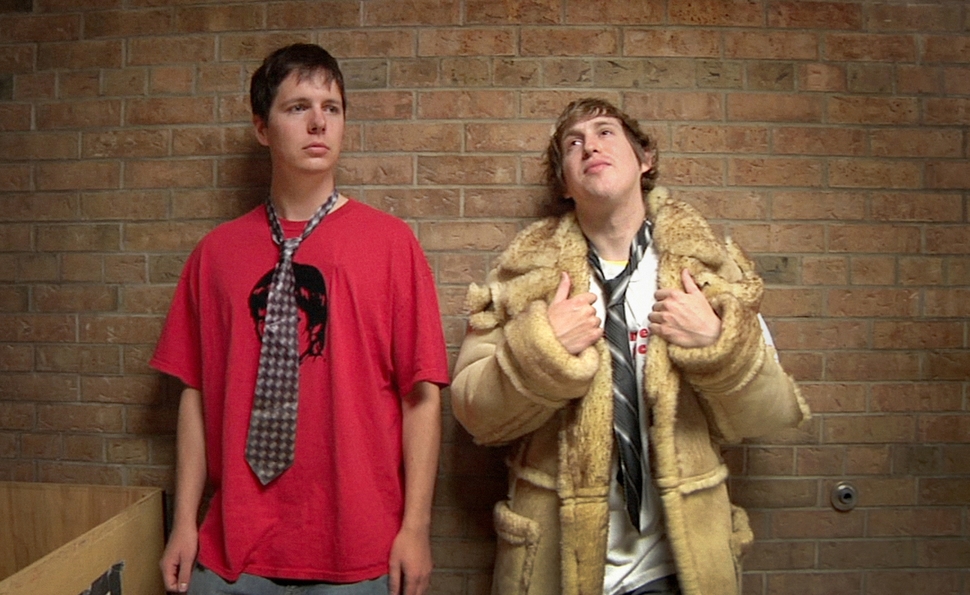 At its best, Matthew Johnson’s The Dirties is both a salute to and an example of the ingenuity of micro-budget filmmakers. Johnson plays a teenage film geek named Matt, who with his best friend Owen (Owen Williams) makes a movie for a high-school class assignment, using an extensive knowledge of action pictures and cult indies to cut together a pastiche of bad-ass posturing. The Dirties shows how Matt and Owen use editing trickery and computer effects to construct a bloody revenge comedy out of stolen shots and bad Tarantino imitations; and Johnson does much the same with The Dirties itself, combining caught-on-the-fly, improvisational moments into one of the rare mockumentaries that doesn’t feel phony. The Dirties is documentary-like in the best way, building a narrative out of Owen and Matt’s natural, often funny interactions.

Where that narrative leads, however, is harder to justify, even though its intentions are mostly good. The first third of The Dirties follows the progress of Matt and Owen’s class project, which their teacher eventually censors for being too violent and vulgar—and also because their film implies that they intend to bring guns to school and assassinate all the bullies, along with anyone who tries to stand in their way. So in the second third, Matt starts planning a real school shooting, under the guise of research for a revamped version of their rejected film, while Owen grows apart from his buddy in the wake of landing his first girlfriend. And then the last third ratchets up the tension, as the estranged Owen worries over whether Matt is really working on a movie or plotting a spree.

The Dirties seems to have multiple goals in mind, any one of which would be worthy on its own. It’s partly a film about bullying, showing how Matt and Owen spend their school days bracing for the inevitable moment when the popular kids will soak their clothes in the gym shower or slap them across the face in the cafeteria, with no adult intervening. It’s also a film about the new breed of mass murderers, depicting Matt as a typical teen who’s been desensitized by shoot-’em-up videogames and movies, to the extent that he appropriates the dialogue and attitudes of Pulp Fiction and The Dark Knight Rises without considering their real-world implications. And The Dirties is a suspense film, in the tradition of Targets, The Day Of The Jackal, and Day Night Day Night, tracking the anxious days of careful preparation leading up to a potential crime.

But those three goals sometimes conflict with each other. The bullying builds empathy for Matt that his thoughtless infatuation with tough-guy movies undercuts. Both of those insights into what shaped Matt make the build-up to his planned massacre feel disrespectful to the actual school shootings that partly inspired this film. Muddying the message even further is that The Dirties isn’t a “found footage” film, but rather a mockumentary, with a film crew (unheard but often acknowledged) following Matt and Owen around and never attempting to stop them from being hurt or hurting others. Is the crew’s existence meant to be a comment on the media fascination with wayward youth? Or are they just a figment of the possibly psychopathic Matt’s imagination, illustrating his delusional narcissism? The Dirties suggests both possibilities, but commits to nothing.

Ultimately, all the metafictions and social commentary are too vague to have any meaning, beyond giving Johnson a foundational justification for this movie. But while The Dirties is in some ways appalling, it’s also effective. If nothing else, Johnson and his collaborators have a real feel for the movie’s central friendship, and how these two guys cling to each other as a refuge from peers who don’t appreciate their interests or personalities. And Johnson gives a pitch-perfect performance as Matt, capturing how his nerdy enthusiasms take precedence over appropriate social behavior, and how he eventually starts using “doing it for the movie” as an excuse to act out impulses he already has. But the same could be said for The Dirties’ more sensationalist aspects, too: that Johnson wanted to make a cheap, inventive thriller about kids with guns, so he pegged it to a social problem, disregarding any potential accusations of insensitivity.