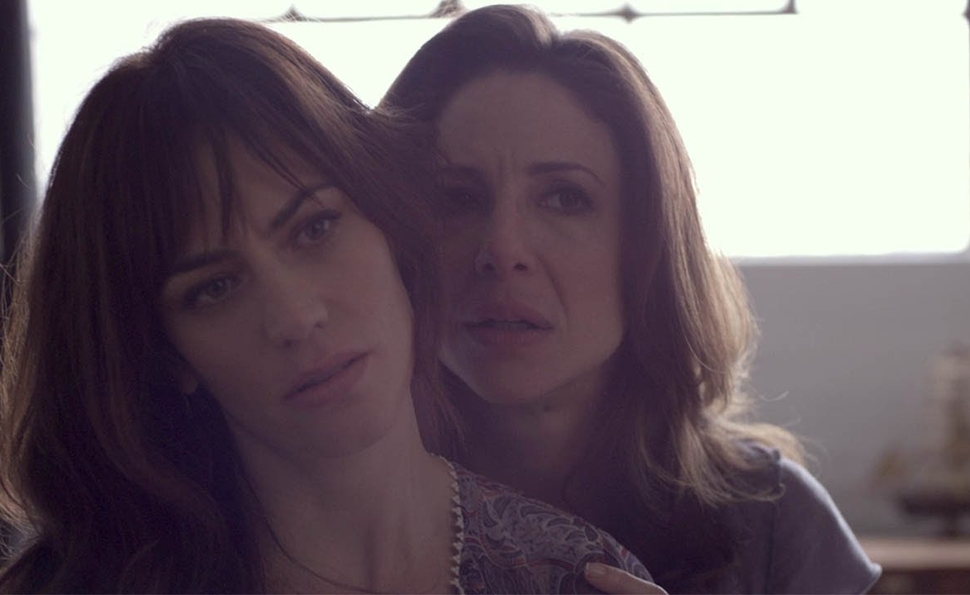 Luis Buñuel’s classic Belle De Jour, in which Catherine Denueve plays a bored housewife who becomes a high-class prostitute, unfolds in a world that doesn’t quite seem real, from the somnambulistic performances to the infamous client who brandishes a mysterious buzzing box. Since the entire movie plays like a lush, outré fantasy, its patently absurd narrative doesn’t provoke any nagging questions. That decidedly isn’t the case with Concussion, however. Stacie Passon’s debut feature, which premièred at Sundance earlier this year, attempts to imagine how the Belle De Jour scenario might play out in the real world; in that mundane context, the plausibility issues arise early, and never ease off. More and more, the film’s incisive realism seems at war with its ludicrous plot, until both finally just collapse, exhausted.

Passon shrewdly opens the movie (not counting an abstract opening-credits sequence set at a gym) immediately after the incident that gives it its title. Accidentally struck in the head by one of her two kids, interior designer Abby (Robin Weigert) finds that something within her has apparently been shaken loose. The absence of passion, sexual or otherwise, that she feels from her wife Kate (Julie Fain Lawrence) becomes intolerable, as does her entire dull domestic existence. As it happens, she has a friend (Johnathan Tchaikovsky) with whom she renovates and flips houses, and he moonlights as an improbably laid-back pimp. He sets Abby up with a hooker, but she decides in short order that she’d rather be the hooker than the hookee, and before long, she’s entertaining a wide variety of exclusively female clients, from a morbidly overweight college-age virgin to an ostensibly hetero acquaintance (Maggie Siff) on whom she’d been harboring a crush. At $800 a pop, no less, though Abby clearly isn’t in this game for the money.

Though still best known for her flamboyant turn as Calamity Jane on Deadwood, Weigert is equally adept at introversion; she does her best to make Abby’s decisions seem, if not rational, at least comprehensible. She can only do so much, though. Concussion treats prostitution in a bizarrely offhand way, as if it were something people can just stumble into/upon without hesitation or reservations, like massage therapy. Every aspect of Abby’s assignations feels painfully inauthentic: Her BTW-I’m-a-pimp buddy, her insistence on meeting clients for coffee before the first sexual encounter, her instinctive ability to provide exactly what each woman needs, whether that’s sisterly reassurance (she actually loans the college girl a copy of The Second Sex) or aggressive provocation. In the real world, Abby would simply have an affair, or a series of affairs, not transform herself overnight into somebody’s tastefully kinky notion of the ideal sex worker.

Were this a Buñuelian exercise in subtle surrealism, that might not matter. In every other respect, however, Concussion is firmly grounded in reality, and that verisimilitude is what makes it intermittently shine. Its married couple with children consists of two women, but no time is wasted establishing, explaining, or justifying that fact—refreshingly, it’s just a given. And while Kate doesn’t get as much attention as she might have, their stalled relationship and the fallout that occurs when Kate inevitably discovers what Abby’s been up to are dissected with surgical precision, culminating in an unresolved ending that’s not so much artsy or challenging as simply, resignedly true. Passon clearly has talent, but she apparently felt that a drama about restlessness and infidelity wouldn’t get anybody’s attention without being embedded in an idiot plot. The sad thing is, she might very well be right.