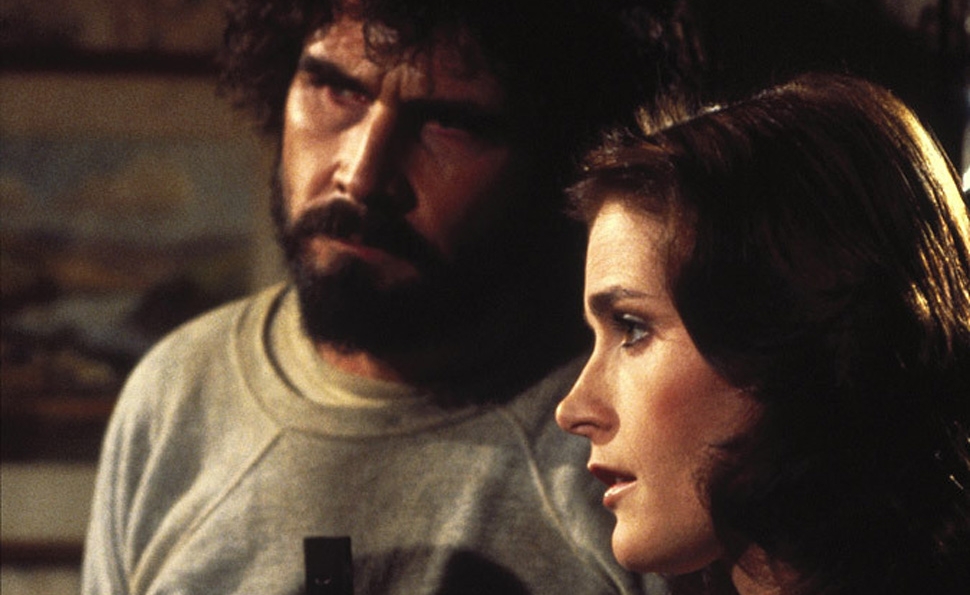 Horror is about teasing the imagination, planting the idea of a threat into people’s heads as much as the reality. And there’s no greater tease in the horror genre than the Amityville house, a creature with quarter-moon attic windows for eyes and a mythology that’s been spun off into multiple books, nearly a dozen films, and even a recent documentary (My Amityville Horror) about traumas both real and manufactured. Every adaptation or reconfiguring of the Amityville story has to start with a shot of the house—and usually a real-estate sign, for buyers looking for a spacious, affordable fixer-upper in which to murder their families—because its totemic power is so enormous. Between the Ronald DeFeo murders of November 1974 and the dubious haunting of the Lutz family in December 1975, which led to a bestseller and the franchising of Amityville, it’s suburban terror epitomized, the menace of Long Island.

The biggest proof of the house’s durability? Not a single movie about it has been any good, yet they keep on coming. Had the original 1979 hit The Amityville Horror been about a haunted house instead of the haunted house, it wouldn’t have infiltrated the culture so deeply and spawned the sequels, prequels, and remakes that have followed in its wake. And yet here we are, considering The Amityville Trilogy, a features-packed Blu-ray box set that’s simultaneously a fascinating time machine back to early-1980s horror (viva the Scream! Factory line!) and a reminder of how far the Amityville legend extended a franchise of virtually no merit. People have now spent nearly 35 years anticipating the most ghastly things from movies that are, for the most part, pitifully benign. 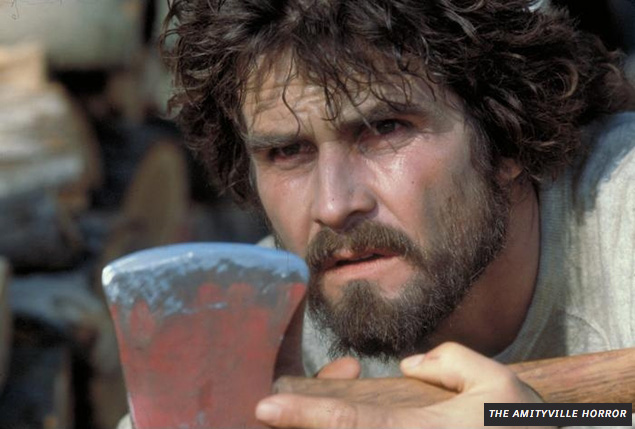 Based on Jay Anson’s book, The Amityville Horror focuses on the Lutzes, George (James Brolin) and Kathy (Margot Kidder), who move their family into the colonial and move back out with the course of a month. There are signs early on that the house has problems—swarming congregations of flies, windows that are hard to open and quick to close, a few rooms that might generously be described as “drafty”—but they’re willing to write them off as quirks of an old structure. Other events aren’t so easily explained, however, and the evil that eventually seeps from the walls exacts a terrible psychological toll on the family, especially George, who loses control of his temper (and hygiene) and spends his afternoons angrily chopping wood in a stained sweatshirt. Add to that a priest (played at max volume by honey-baked ham Rod Steiger) who’s tormented by the place, and the danger is suddenly more tangible.

A more sophisticated film might have played with the ambiguity about the true source of the horror: a stepfather’s abuses, or a house that “remembers”—and perhaps aided—a mass murder that took place the year before. But director Stuart Rosenberg completely buys into the Lutzes’ claim that the supernatural menace emanating from the “gateway to hell” in the basement accounts for why George gets the crazy-eyes and flies off the handle. With a long history as a TV director and virtually no experience making horror films, Rosenberg has no evident skill in building the atmosphere essential for haunted-house movies, so The Amityville Horror has the quality of a dull, badly acted made-for-TV melodrama, punctuated by the occasional shock effect. For anyone irrationally scared by the Amityville house, a film this hapless could only be reassuring. 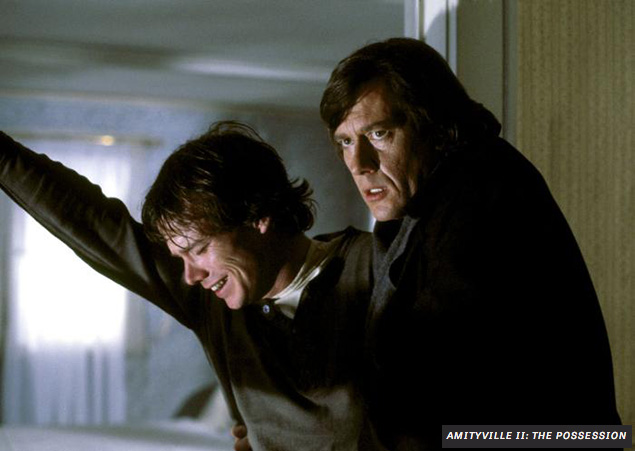 For Amityville II: The Possession, the franchise was turned over to Dino De Laurentiis, and he brought in an Italian exploitation-movie director, Damiano Damiani, who at least knew his way around the genre. Scripted by Tommy Lee Wallace, who wrote and directed the notoriously batty Halloween III: Season Of The Witch the same year, Amityville II is a prequel (of sorts) that calls back (kind of) to the DeFeo murders that started it all, but that’s just the beginning of its lusty offenses to good taste. Where the first Amityville Horror dealt with garden-variety domestic abuse, this one focuses on a family, the Montellis, who are in open warfare from the start, led by a godless patriarch (a sublimely ridiculous Burt Young) quick to smack his wife (Mommie Dearest’s Rutanya Alda) and beat the youngest of his four children with a belt. But the house sets its quarter-moon eyes on the eldest son (Jack Magner), its Ronald DeFeo proxy, whose transgressions start with talking his sister (Diane Franklin, the French exchange student from Better Off Dead) into sleeping with him.

After the square, lifeless creepshow of the first Amityville Horror, there’s an appealing nuttiness to Amityville II, thanks to the family’s robust kerfuffles, a script that’s eager to cross the line into the flagrantly offensive, and a director who knows how to use all the tools of the genre. (A shot that curls over and around the eldest son, holding him upside down in the frame before turning back 180 degrees, is typical of Damiani’s technical derring-do.) But the filmmakers make the curious decision to abandon the domestic madness of the first half and segue into a full-on Exorcist ripoff, with the focus shifting to a conflicted priest (James Olson) who wants to talk the evil out of the boy. For much of the second half, Amityville II leaves the house entirely—an unintentionally hilarious scene has the defense attorney trying to talk a judge into accepting a “Devil made me do it” plea—and goes through all the demon-possession paces before returning for a gross-out finale. It’s a defilement on every level—for exploiting the DeFeo murders, for its scenes of incest and child abuse, for drafting off The Exorcist—and it’s far and away the most compelling Amityville Horror movie. 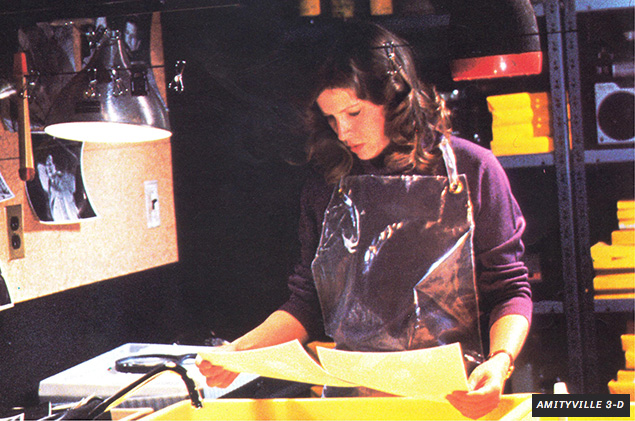 The next year, De Laurentiis’ team opted for dramatic course-correction by steering the franchise into the ditch. Amityville 3-D is rated PG and directed by Richard Fleischer, another journeyman whose credits include science-fiction standards like 20,000 Leagues Under The Sea and Soylent Green, and Ashanti, which its star, Michael Caine, called one of the worst films on his bad-film-filled résumé. Like Rosenberg, Fleischer doesn’t come to the horror genre naturally, and he’s further hampered by the watered-down rating and the need to use 3-D gimmickry at regular intervals. By contrast to the temperamental fathers of the first two entries, Tony Roberts yawns his way through the role of a recently divorced journalist who exposes the Amityville house as a fraud, and buys the property at a rock-bottom price. But the flies are still there. And the voices. And the burbling pit of hell in the basement.

The new Blu-ray version accommodates 3-D television owners, but it isn’t hard for 2-D owners to figure out which effects are coming at ’em. At the low point, the journalist’s daughter and her three friends (including a young Meg Ryan) follow up a spooky, doom-laden attic seance by tossing a frisbee around in the back yard. Though Amityville 3-D proceeds as if the other two films didn’t exist—there’s virtually no continuity in this franchise—it marks the full evolution of the Amityville myth from freestanding, real-life menace to harmless theme-park ride for the whole family. In a trilogy full of offenses, that one might be the most cynical of the lot.

For a trio of widely disrespected movies, the box set has an impressive array of features surrounding the first two films. (Amityville 3-D has no one to speak for its merits, though it does include the trailer.) “For God’s Sake, Get Out!”, a 20-minute retrospective documentary on the Amityville Horror disc, is the highlight of the bunch, built around new interviews with Brolin and Kidder, who are both gracious and candid about the experience. Though they’re interviewed separately, it’s clear they didn’t work together well: Kidder liked to be “in the moment” and take a looser, less structured approach to acting, while Brolin was more fastidious in his process, and irritated by her lack of discipline. (Kidder also admits to doing the film for the money.) “Haunted Melodies” talks briefly with the great composer Lalo Schifrin, whose score is a redeeming feature of the first two movies. There’s also a weird commentary track by Hans Holzer, a Ph.D. in parapsychology who wrote several books on Amityville, and believes that the house’s construction on a sacred Native American burial ground accounts for all the disturbances over the years. Holzer’s daughter Alexandra contributes an even weirder commentary track on Amityville II, full of endless pauses, straight descriptions of what’s onscreen, and occasional insights into how the film tracks—or in the case of the incest subplot, doesn’t track—with her father’s writings. The other features on the Amityville II disc are all interview documentaries, including ones with Damiani (who admits to being a director-for-hire, though he’s justly proud of certain stylistic touches), Rutanya (who remembers Damiani fondly, while admitting, “sometimes he would give me a little boob-touch”), Wallace, Frankin, and Andrew Prine.