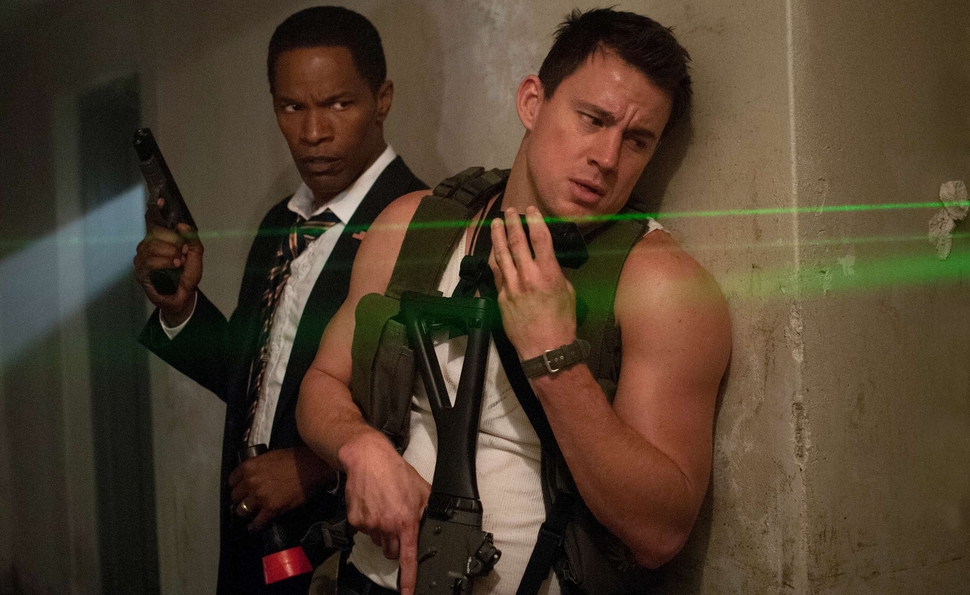 If Trey Parker and Matt Stone were interested in making a sequel to their brilliant spoof Team America: World Police, they could easily borrow the plot of Roland Emmerich’s preposterous new action extravaganza White House Down. They could also borrow huge swaths of the movie’s dialogue and sequences, since White House Down is never more than a sliver away from gleeful self-parody. It’s pure patriotic kitsch, the cinematic equivalent of a black-velvet painting of a bald eagle clutching an American flag in its talons as it soars majestically over Mount Rushmore.

The film’s appealing shamelessness begins with Emmerich, the pop master of mindless spectacle, returning to his greatest triumph by spinning an entire film out of the image of the White House blowing up in Independence Day—a shot actually referenced in James Vanderbilt’s White House Down screenplay as part of White House lore. White House Down and Independence Day also share an absurdly romanticized portrait of America’s president as a dashing action-hero-in-chief. Where Bill Pullman played an idealized version of Bill Clinton in Independence Day, Jamie Foxx’s President James Sawyer is what President Obama would be if he dramatically exceeded his partisans’ impossible expectations.

President Sawyer is a brilliant, fearless pacifist when it comes to foreign policy—this fantasy-Obama merits a whole shelf of Nobel Peace Prizes, not just one—yet he isn’t afraid to take up arms personally if terrorists threaten our nation’s future. Foxx, a brilliant mimic and a gifted actor, doesn’t directly impersonate Obama so much as he wryly, thoroughly channels the man’s essence, as well as his syntax, body language, and vocal tics. Some of the film’s most inspired moments explicitly riff on Obama’s foibles, like his struggles to kick smoking and his fondness for Air Jordans.

For the buddy-movie shenanigans at the film’s core, Sawyer has a curious dual identity as a brilliant peacemaker and the bookish sidekick to a strapping slab of beefcake. Channing Tatum co-stars as John Cale, an idealistic police officer and single father who must atone for committing the worst conceivable crime a dad can commit in movies like these: missing his 11-year-old’s talent show.

John’s daughter Emily (Joey King) isn’t just a technology-addicted tween chronicling her life for posterity on her own YouTube channel. She’s also an accomplished flag-twirler and walking encyclopedia of White House trivia. This makes her a useful vessel for exposition about the building’s unique features. When the White House is attacked, Emily’s obsessive knowledge of presidential trivia proves essential, instead of just being an annoying quirk destined to get her shoved into lockers throughout what promise to be her awkward teenage years.

Thankfully, an opportunity for redemption presents itself when the White House is attacked by a rogue’s gallery of cartoonish terrorists straight out of a 1980s Cannon production. Zero Dark Thirty’s Jason Clarke plays the leader of this dream team of national-security threats, a former government operative with a deadly grudge against his former employers. Jimmi Simpson, a scene-stealing character actor (perhaps best known as one of It’s Always Sunny In Philadelphia’s repellent McPoyle brothers), has a ball as a notorious super-hacker who sees his work as a subversive, theatrical form of performance art.

John’s path to proving himself, and also saving the world, begins when he pairs off with the president during the White House invasion, and the two skulk about the Oval Office and various tunnels and secret chambers, taking out bad guys and looking for ways to communicate with the outside world and get back to Emily, whom the villains are holding hostage.

White House Down isn’t shy about attempting to generate suspense by regularly putting a small child in peril. But the film only gets more agreeably absurd as it proceeds, leading to a hilariously over-the-top final act where every facet of Emily’s personality—her hero-worship of President Sawyer, her compulsively updated YouTube Channel, her mastery of presidential and White House trivia, even the talent show skill her father shamefully was not able to experience firsthand—comes into play in the campiest manner imaginable. 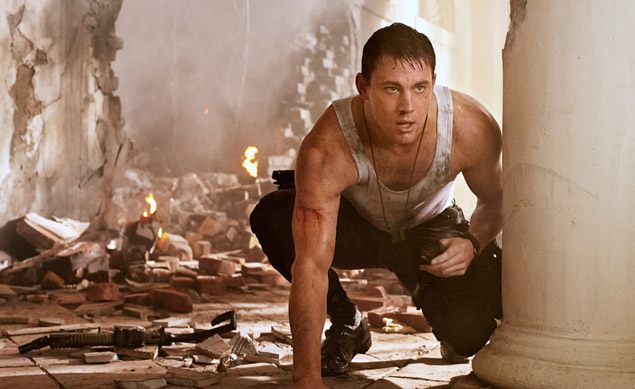 Emmerich’s love letter to clichés, melodrama, and God’s own United States trades suspense for patriotism. There’s never any doubt that superhuman Sawyer and his buff new buddy can conquer any threat, foreign or domestic. Emmerich’s presidential hyper-pulp is strangely reassuring, in that it makes a credible attack on the White House and the commander-in-chief look substantially less plausible and realistic than the alien attack in Independence Day, or the giant lizard-induced crisis of Emmerich’s equally campy but much less amusing Godzilla.

A guiltily entertaining drive-in movie for a post-drive-in age, White House Down is spectacularly dumb, but at least it’s dumb fun, the best that can be hoped for under the circumstances. White House Down just doesn’t acknowledge its premise’s vulgar idiocy, it celebrates it. Its delight in its giddy excess is infectious.